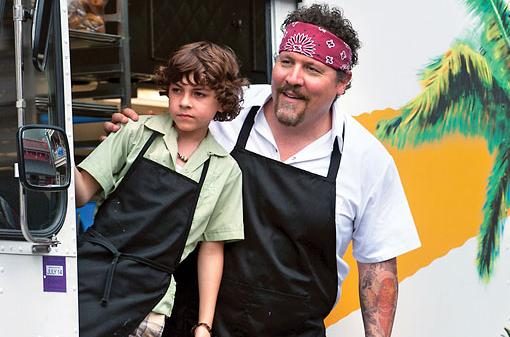 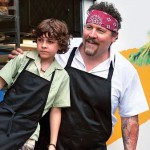 Anticipating the appearance of Ramsey Michel (Oliver Platt), a prominent food critic, Carl Casper (Jon Favreau), a respected chef at a popular restaurant in Los Angeles, wants to add some innovations to the restaurant’s tried and true menu. Riva (Dustin Hoffman), the bistro owner, however, tells him to stick to what has always worked, a conflict that is unresolved until the chef decides to utilize more of his creative skills somewhere else. Written and directed by Jon Favreau and featuring cameos by Robert Downey Jr. and Scarlett Johansson, Chef is an entertaining film that keeps the blood moving with a very loud Latino soundtrack selected by music supervisor Mathieu Schreyer (bring ear plugs), but never really rings true as anything more than an enjoyable, market-tested contrivance.

The story takes shape after Ramsey writes a negative review of the restaurant causing Carl to respond online, a tweet that gets wide circulation and a return visit by Michel. Without taking responsibility or looking with objectivity at the points made in the review, Carl goes into a paroxysm of rage, venting his anger not only at Michel but at all critics whose opinion ends up really hurting people, (nothing personal with Favreau, of course). As a result of this somewhat implausible blasting of a food critic in a public setting, Carl is (you guessed it) fired.

Though his ex-wife Inez (Sofía Vergara) is none too pleased, she sees it as an opportunity for Carl to spend some more time with his ten-year-old son Percy (Emjay Anthony), who seems to have the makings of a good relationship with his dad but wants more of him than just going to the movies once in a while. Taking off for Miami with Inez and Percy, they meet Inez’s other ex-husband Marvin (Robert Downey Jr.) who convinces Carl to become an independent entrepreneur, refurbishing an old truck and setting up a mobile restaurant serving Cuban sandwiches and Yucca fries, not exactly nouvelle cuisine.

It is then that Martin (John Leguizamo), Carl’s old cook from Los Angeles, happens to show up to join the sandwich truck, while son Percy has clean-up duties and helps out with the cooking. Almost immediately and without any trial and error, the venture achieves success and they set out for Los Angeles with stops along the way in New Orleans and Austin, Texas. Percy has the chance to go to Disney World, but what ten-year-old wouldn’t rather go to New Orleans to sample the food? Along the way, their trip becomes one long commercial for Twitter with Percy teaching his dad how to use social media to promote the business, treating it like he is unveiling a brand new invention. 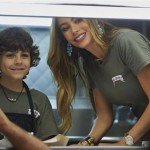 Taking advantage of the commercial success of television food shows, the star of Chef, of course, is the food which is displayed in tantalizing bits and pieces like models for a fashion show. With the food presentation so appealing, the audience could be seen whispering to each other — boy, doesn’t that look good. What we do not see, however, is the artistry (and hard work) that goes into cooking anything, only the hungry customers standing in long lines.

Of course, the subject of whether or not the food being served is healthy is not discussed, but one can definitely form their own opinion. Chef is a crowd-pleaser that will satisfy a mild hunger but leaves you wanting more substantial fare. What does work is the bonding between father and son and the message that your work should be something you are, rather than something you do. 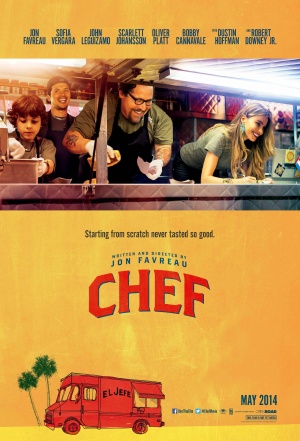