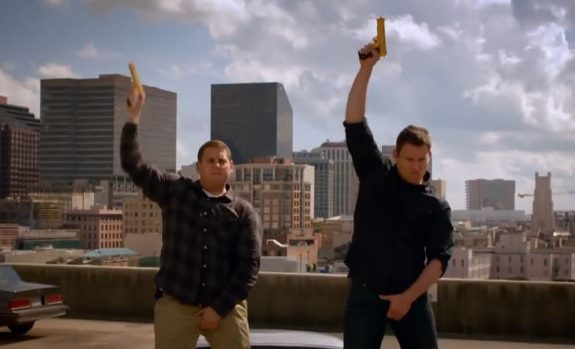 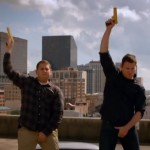 Channing Tatum has found his calling. Well, he really found it in 2012 during the “21 Jump Street” reboot, where the cardboard cut-out with matinee idol good looks suddenly came alive in front of the camera with an inspired and lovable comic performance. After that, he mostly returned to generic action roles (“G.I. Joe: Retaliation” was a lame step back), though at least he tried to blandly recapture some of that looseness in blockbuster flick “White House Down” and stripper drama “Magic Mike.” But now it’s 2014 and Tatum has returned to Jump Street, once again proving that raucous bromance comedies are clearly his forte.

It’s a welcome return, not only for Tatum’s cuddly charm, but for other Jump Street alums like onscreen partner Jonah Hill and satirically minded goofball filmmakers Phil Lord and Christopher Miller. With this gang comes another unhinged adventure and plenty of laughs, plus the winking joke that they’re delivering a nearly identical product to the one they pushed out two years ago. Well, at least they’re being self-deprecatingly honest.

The meta gags unspool quickly and early as a TV-like recap of the last adventure, somewhat reminiscent of Lord and Miller’s brilliant little animated series “Clone High,” kicks things off, followed by talk of the Jump Street headquarters having to move from one church to another across the street, thus facilitating the new title 22 Jump Street. As our heroes Jenko (Tatum) and Schmidt (Hill) approach the updated address, a sign announcing the arrival of a condo complex at 23 Jump Street can be glimpsed in the background. There are plenty of comments that suggest the in-movie decisions surrounding the Jump Street program are now a metaphor for the franchise itself. It’s all pretty sly stuff, especially in the hands of Lord and Miller, who have a clear talent for milking such in-jokes without draining them dry.

As promised, the sequel is mainly trying to be the first movie all over again, which may be a low bar to shimmy under, except the movie is consistently funny enough to make such unambitious aims feel at least slightly justified. This time around, the boys are heading to college to once again flush out the dealer of a mystery drug. The actual substance in question plays even less of a role here than it did in the 2012 flick, making it nothing more than an easy MacGuffin this time around. That’s fine enough, since most of the movie revolves around going for the joke and ignoring everything else. The drug doesn’t really matter and it’s just as well that even the filmmakers openly admit that.

What does matter is the comic chemistry between Tatum and Hill, who are arguably even more fun together now than they were two years ago. They’re a mismatched couple, but a strangely convincing one and their relationship is sweetly endearing. Much of the conflict in 22 Jump Street revolves around their different strengths and the challenges of making them work in tandem, so there’s a constant reminder of Jenko’s physical prowess and how effortlessly it trumps whatever awkwardness Hill brings to the partnership.

Some of the sharper gags come early in 22 Jump Street, such as when a jock who Jenko and Schmidt suspect bears a tattoo that will incriminate him as the dealer reveals that his tattoo is actually that of a red herring. Wink wink, indeed. After a while, the humor settles into less satire, more rapid fire nonsense. It’s still supremely funny at times, so there’s not much to complain about beyond the nagging feeling that the silly high the movie offers won’t last too long after the credits roll. Huh. Maybe the drugs are a metaphor, too.

It’s almost as though Lord and Miller sense this feeling, because they send us out of the theater with an end credit sequence for the ages, an instantly iconic collection of potential sequel concepts, mainly boiled down to a few quick action shots and a poster image. The joke continues on until nearly twenty alternate sequel suggestions have been made, complete with cameos and plenty of that aforementioned self-deprecating humor. By the time they get to pushing 40 Jump Street on us, there’s probably nowhere left for this particular spoof to go, but the sheer glee with which everyone is skewering Hollywood’s love of endless franchises lasts until Lord and Miller finally retire the mocking montage. 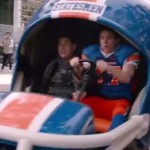 A chase in a helmet.

Above all else, 22 Jump Street is essentially an invitation to enter into a world that mixes razor sharp wit with a bevy of penis jokes. The genital gags start to take over after a while, but such is the bedrock of a bromance. Tatum and Hill keep the laughs coming, sometimes separately as Jenko lives the college jock dream and Schmidt finds solace in the arms of pretty, though dull love interest Maya (Amber Stevens), other times together, especially as the pressure to find the dealer ramps up in the final chunk. The third act is an overwhelming assault of craziness as the boys take in some spring break festivities in a last-ditch effort to crack the case. Every attempt is made to squeeze in another laugh here and it’s mostly successful, saving its best genital joke for last, whatever that’s worth.

In the end, 22 Jump Street really is a near carbon copy of “21 Jump Street,” just as Lord and Miller jokingly pledged. There’s room for college movie tropes now instead of high school hierarchy observations, but the strengths and weaknesses of the two movies are identical. 22 Jump Street is probably a little funnier and its moments of satirical inspiration are quite excellent, though it doesn’t exactly resonate. Lord and Miller have certainly extracted a lot of laughs from their unlikely star couple and the filmmakers are probably never clearer about where their talents lie than when they’re mounting big action sequences. They’re funny guys, not technical craftsmen and this Jump Street series always feels a little out of its element when masquerading as a blow-em-up action flick. In that sense, Tatum really is the perfect fit. A surprisingly hilarious dude who’s more at home spoofing the tough guy persona than embodying it, he’s probably hoping that those end credit sequel ideas come to fruition. And why not? The joke may get old, but Lord, Miller, Hill, and Tatum can rest assured that we won’t remember it long enough to care. 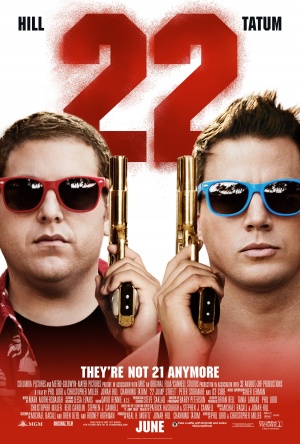