Strickland (“The Duke of Burgundy”) is an unconventionally adventurous auteur, demonstrating a distinct artistic absurdity in the telling of a story about a cursed dress with a devious mind of its own. Haunting and hysterically atmospheric, In Fabric is an off-the-cuff horror story that is playfully perverse in its whispery commentary on the lonely who are not just facing isolation within the walls of a shadowy department store, but also in an indifferent world of high-strung happenstance. The Gothic-accentuated vibes, sumptuous and striking set designs, and a thunderous soundtrack all give surrealistic adrenaline to Strickland’s killer clothing narrative.

The target is now divorced and employed as a bank clerk, single mother Sheila (Marianne Jean-Baptiste, Oscar-nominated for her terrific turn in 1996’s “Secrets & Lies”) who wants to put some much-needed spark in her love life since her marriage ended. So the scene at Dentley & Soper’s Trusted Department Store affords her the golden opportunity to splurge on a piece of wardrobe that hopefully will make her stand out to a potential lover. Sheila, however, is unaware of the extremely malevolent forces that hover over the store and its oddball employees that give a new literal meaning to being “dressed to kill.”

Sheila is carrying a full plate of concerns that a fancy dress cannot rescue her from despite what the desired fabric represents. In addition to tackling the unpredictable dating game, Sheila must contend with a stubborn-minded son named Vince (Jaygann Ayeh) who is involved with a vicious vixen of a girlfriend named Gwen (Gwendoline Christie, “The Darkest Minds”). Furthermore, Sheila’s stuffy bosses Stash (Julian Barratt, “Mindhorn”) and Clive (Steve Oram, “Sightseers”) are insufferable as they give her a hard time on her work-related endeavors.

Mixing atmospheric, seductive madness with deadpan humor, Strickland ensures that the darkened insanity of his film crackles with wily, concocted craziness. Interestingly — and more unexpectedly — the disturbing dress at the heart of the story is a memorable piece of evil that belongs among the ranks of cinema’s most iconic horror objects such as the razor-fingered glove worn by Freddy Krueger in “A Nightmare on Elm Street,” Jason’s hockey mask from “Friday the 13th,” and even the murderous doll Chuckie from “Child’s Play.”

Strickland’s sharp eye for the outrageousness of the consumerist culture (both morbid and merry) is additionally dressed to the nines by the eccentric and macabre personalities dwelling within. Jean-Baptiste is marvelous as the unaware Sheila spiraling into the realm of department store deviance, loveless malaise, and ever increasing shifty encounters. The supporting cast is wickedly unbalanced in their shadiness as well. Fatma Mohamed (“Self-Portrait of a Dutiful Daughter”) is inviting as the intoxicating, but ghoulish, sales assistant Miss Luckmoore, a gorgeous specimen mechanically distributing her icy spiel on merchandise. Hayley Squires (“I, Daniel Blake”) as Babs is winning as she and Jean-Baptiste’s Sheila venture through the hot-and-cold moodiness of Strickland’s ethereal haze of topsy-turvy, hypnotic hedonism. And the dueling cringe-worthy antics of the Barratt and Oram pairing as Sheila’s bothersome managers is British comic relief at its irreverent finest.

In Fabric is an off-the-wall, acid-tongued horror comedy saturated in strangeness. But just like the hexed garment at its core, its calculated lunacy — though not a fit for everyone — is one certainly worth trying on. 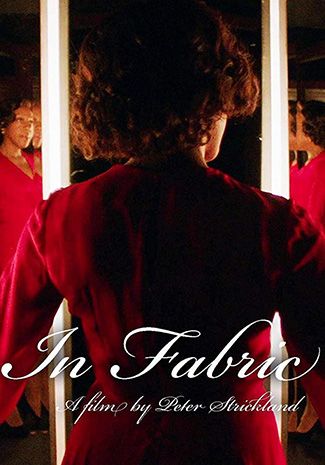