Cultures and genres clash cutely enough in Mike Wiluan’s east/west mashup Buffalo Boys, an action pic that’s high on energy and low on originality. Make of that what you will, but considering the aim appears to be a sort of genre refresher, it’s easy to feel an aura of missed opportunities when the story proves to be a dutifully derivative collection of underdog hero tropes.

It’s not like eastern-influenced westerns are particularly new anyways, especially not when a superstar like Jackie Chan had a comedy hit with “Shanghai Noon” nearly 20 years ago. To be fair, though, this is more of a western-influenced eastern, so there’s some difference. Of course, that genre swap was already done quite beautifully by Kim Jee-woon in his delightful 2008 Korean action pic “The Good, the Bad, the Weird,” so Buffalo Boys just feels a bit behind the times.

But if you can get all that out of your system and accept that this latest movie meld is a bit stale in concept and overly old-fashioned in its narrative design, then there remains a fair amount of fun to be had. Opening in mid-19th century California on board a train where brothers Suwo (Yoshi Sudarso, “Power Rangers Dino Charge” TV series) and Jamar (Ario Bayu, “Dead Mine”) make money by organizing and participating in railcar fights, the action soon moves to colonial Java, the brothers’ homeland that they fled as babies with the help of their slain father’s friend.

They return all these years later hoping to find peace, but instead run afoul of the area’s evil Dutch rulers, with whom the brothers’ family has some history. It doesn’t take long for them to settle in a quiet village that is predictably under the thumb of sneering villain Van Trach (Reinout Bussemaker, “The Paradise Suite”), thus inevitably stoking the conflict.

This is all very familiar territory, the outsider heroes coming to the aid of the downtrodden, finding themselves greatly outnumbered, but choosing to fight the good fight anyway. The map of the plot is visible to the viewer long before it is to any of the characters. But that’s often the case in action cinema, so what matters with lowered expectations is that the journey to the obvious endpoint is an entertaining, engaging one and Wiluan succeeds relatively well in that regard.

Sudarso and Bayu have likable chemistry and convincing charisma, making them a fine pair to cheer for. They’re cowboys with a mix of six-shooters and martial arts, which is certainly a winning combination even if it’s been done several times before. Perhaps most importantly in this scenario, the action is all well shot and some of it is quite creatively choreographed. While Wiluan’s style isn’t overly memorable, the set pieces are sharply paced and imbued with a raucous vigor.

The movie’s best moments are when the fisticuffs take over and henchmen are tossed around playfully. Dramatic breaks between the action feel a bit forced and the treacle flows too freely as Wiluan tries to squeeze out some tears among the blood. The villains are all so dastardly and the heroes all so saintly that it’s tough to take any of this very seriously — which at times seems to be the point — since the story is often told in a rather pulpy manner. That only makes the occasional forays into tear-jerking theatrics feel unnecessarily out of place, though.

Buffalo Boys is far from refreshing and it’s all too eager to slot its characters into clichéd roles (the women are disappointingly stuck being damsels in distress), so there’s plenty to gripe about. Still, as far as old-fashioned genre mashups go, this one is somewhat endearing. It offers fun with flair, which are important ingredients in a movie that’s so committed to pitting its virtuous heroes against their eerily evil antagonists. There’s nothing particularly new under the setting sun of this adventure, but you might as well kick back and enjoy the ride anyways. 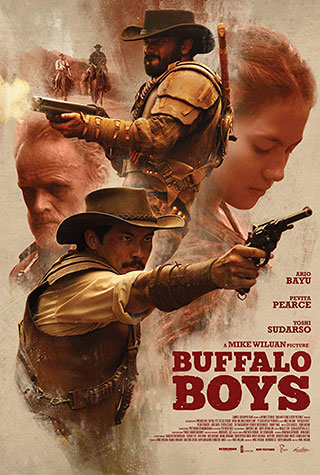