Lightning McQueen: Mater, you ARE the bomb.

Never have truer words been spoken in a movie, and never have I had the displeasure to pronounce a Pixar film a failure — until now. Cars 2, the sequel to the 2005 runaway animated hit “Cars,” misfires on so many cylinders, it becomes a huge lemon long before it crosses the finish line.

A convoluted plot involving secret agents, multiple races (mixing NASCAR, dirt track and Formula One autos) and a vendetta against oil and the combustible engine combine to slow this clunker down, all the while veering all over the track with almost disjointed and disconnected vignettes. Centering the storyline on Tow Mater (voice of Larry the Cable Guy) was a mistake, as well.

Not to mention, all of the charm of the first picture, with fish-out-of-water hotshot racer Lightning McQueen (Owen Wilson) trapped in the ghost town of Radiator Springs and learning about himself and others, is thrown out here. Instead, Lightning and the other townsfolk are pushed out of the spotlight, leaving the lightweight Mater to be involved with two British intelligence agents Fins and Holley (Michael Caine and Emily Mortimer) and a camera device that blows up car engines, or something to that effect.

Oh, and Cars 2 pushes a subplot about alternative fuel that gives the movie a decidedly unwelcome politically-correct slant that runs the heavy-handed eco message into the ground. We’re also treated to a host of characters, many of which are not even cars, at all. It becomes quite overwhelming and disconcerting in the end.

After Lightning is goaded into participating in the Global Grand Prix (with events in Tokyo, Monte Carlo and London), he drags Mater along (for no good reason). This is proven when formula one racer Francesco Bernoulli (John Turturro) edges him out because of the tow truck’s blunders. Booted off of team McQueen, Mater becomes involved in the ridiculous espionage premise that had children (as well as many adults) dozing off during the middle parts of the movie.

Without his idiot friend, McQeen redeems himself with a victory in Monte Carlo, so it all comes down to the final match up in London. Unfortunately, as Fins, Holley and Mater try to figure out who’s behind whatever is going on, the final race scenes are muffled and colorless. The excitement of Tokyo and the wonderful animation of Italy are substituted by the cloudy, overcast skies of Great Britain. It’s almost a crime to diffuse the wild pastels and palettes of the first film (and the first half of this one) with such drabness.

The sequences in Japan are wonderfully funny and vibrant. The whole anime and overtly cute culture is parodied nicely. The scenes where Mater discovers sushi and bidets are especially delicious. That soon fades, though, and we’re treated to a Bond film (more like a Gold Bond film) in which Michael Caine does a dust-off of his spy bit in “Austin Powers in Goldmember.”

Nevertheless, the absence of color does not compare with the absence of heart, coherence and plausible story-telling that the original Cars offered. Directed by Academy Award winners John Lasseter and Brad Lewis, Cars 2 is the first Pixar movie that I am forced to give a negative recommendation to, which is especially painful after such wonderful presentations as “Monsters, Inc.,” “Finding Nemo,” “Ratatouille,” “A Bug’s Life,” “Wall-E,” “Up” and the “Toy Story” trilogy. 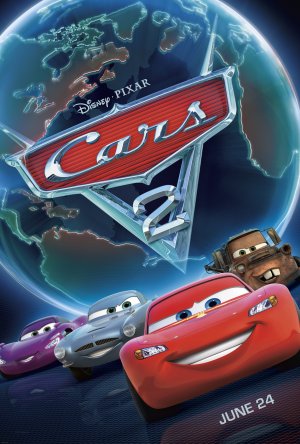