Ah, the child in me resurfaces just in time to watch the latest offering from Pixar and Disney. Usually, the inner child shines through after drinking like a NYC hobo, but this time it was in anticipation of Cars. I love being a kid!

This time around, the story revolves around a egotistical race car named Lightning McQueen — a rookie in the Piston Cup Stock Car Racing Series. Now of course the plot isn’t particularly original; guy is self-centered, he realizes as the movie progresses that he indeed needs others around him to make his dreams come true . . . What sets Cars apart is most obviously the animation. Here again we have a masterful demonstration of what CGI can do in the right hands. The colors are vibrant. The scenery is well thought out, most pleasing is the fact that there is action is the background — this shows the animators really thought out the project. No stationary shit here. It’s also funny to see how the world is setup to accommodate cars as humans — garages as hotels, oil and gas as beverages, etc.

Of course, an animated picture also relies heavily on the voice acting. The nasally, boy-eyed wonderment voice of Owen Wilson as McQueen was well cast. More surprising was Larry The Cable Guy as Mater. His stand-up is rather weak, but he was definitely a shoe-in for a redneck, good ‘ole boy. Even his “Git er done” moniker fit well!

Another surprise is Cars isn’t just a stupid animated NASCAR flick. I cringed at the thought this may be a mindless, drive around an oval kind of movie (if you know me, you’ll see the irony). But alas, relief came swiftly. Although Cars relies heavily on the race inspired theme (it is called Cars, afterall), there is plenty of side themes and distractions to make this movie more well rounded and enjoyable for the non race fans (sinners). You’ll definitely get a kick out of the tractor tipping scenes.

Cars is well worth your time and money. Not only will your inner child resurface but your kids will have a blast as well. Well done Pixar — after seven high exposure feature films, you haven’t missed a beat (wish other movie studios would think about this before dumping more shit our way). 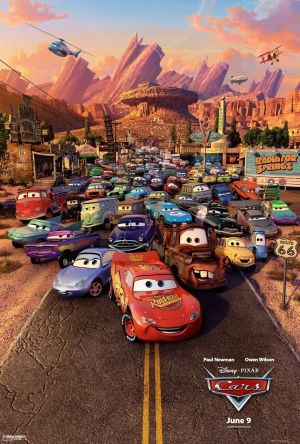