Again, I find myself drawn to one of those lovey-dovey movies that Hollywood simply adores. And more often then not, I find myself scratching my ass wondering what in the hell I was thinking. Guess what — this is another one of those times; but not for the reasons you might think.

The Break-Up from a high level perspective has a lot going for it. Vince Vaughn is no doubt the best comedic straight man in the business at the moment. Jennifer Aniston is a fine looking piece of ass. Honestly, I had never really paid attention to her before, but Brad Pitt was a lucky motherfucker (taking into account he knocked Jolie’s ass too). It also had a story line, I hadn’t necessarily seen before. Granted it is a rather stupid plot — guy and girl breakup, neither want to leave the condo, so they do irritating shit to one another; but it is rather original.

There are ultimately two things wrong with this movie however. First, it is really just plain fucking stupid. Watching two people pretend to love one another, poorly is a tough pill to swallow. I mean c’mon, Jennifer Aniston fucking Vince Vaughn? That’s like a troll screwing a princess (wait a second wasn’t that actually the premise of “Shrek?”); it is completely unrealistic. And the shit this “loving” couple do to one another is just plain ridiculous. Setting up a stripper club in your living room? Pure comedy genius . . . not. The writers could have come with a so much more, it is very disappointing when creative, funny moments are missed.

Second problem with The Break-Up is it hits too close to home! Holy shit Batman, I was watching my life story on the big screen! The similarities are endless. My wife is a queen and I’m a fucking meathead. I act like a two-year old while she balances the checkbook. She cooks and cleans; I eat, get fat and shit my pants. Fuck that! A comedy isn’t supposed to open wounds and pour salt into them. Self introspection ain’t my idea of a fun time and it shouldn’t be for you either. Man, I am a complete asshole. Now I’ve got to rethink my life’s plan.

However, there is a few good spots. As mentioned previously, Jennifer Aniston is good eye candy. Can’t act for the life of her, but a blurry image of her ass will make up for it. Also, having Jon Favreau be the guy that Vaughn goes to to pour his heart out to, is perfect. Favreau once again comes through with a totally believable, moronic monkey. Most importantly, the movie doesn’t end as you might think. Finally, a feel good movie that don’t quite make you feel too fucking good. 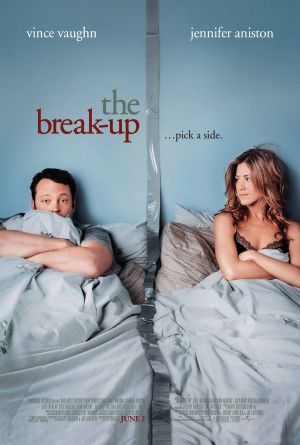