Another day goes by and I find I need to put some filler into it, as it isn’t filled with nearly enough activity. So as usual I fire up some popcorn get a cold beverage and watch a movie. This time The Fast and the Furious: Tokyo Drift is the starring title. By the way, I use starring very loosely.

For this review I’m going to be quick and blunt and spare you, the would-be viewer, any pain. And dread, like a buffet feels when it sees a bus full of fat fuckers pull up. And fear, like visting a dentist for a cleaning and then learning you need to have several root canals performed. And sorrow, like walking into a bedroom to find your best friend ass fucking your turtle.

But for the sake of allowing me to vent my aggravation, let’s dive into the movie. By the way, spoiler alert — if you even care.

We have an asshole, tough guy, high school student who loves to race so much he gets kicked out of multiple schools and turns his mother’s life inside out. So after his latest racing adventure (I’m supposed to believe his hunk of shit car will beat a Viper?) he is shipped to Japan to avoid going to jail (I am supposed to believe our court system works this way?) to live with his super strict, military father. So guess what happens? Day one, where his father gives him a curfew and tells him no racing, the kid races and comes home late. Shocker! And to top it off the kid gets mixed up with the yakuza — the Japanese mafia. It’s great to see the kid got his priorities straight and that his father is fine with it all. Shit, later after all the gun play and accidents on city streets, his dear old dad actually gives him a car to race in! I actually sat and shook my head at all the completely fucked up shit going on. Completely and utterly un-fucking-believable.

However, there is almost a bright spot! I found myself entranced by the soundtrack. Many of it is Japanese house/trance beats which I found myself paying more attention to than the movie. Oh yeah, if you like street racing, I suppose the “drifting” scenes aren’t too bad. However, the racing wasn’t up to par with the previous movies and I found most of them boring after watching the first race or two. Even with that minor glimmer of light this should be no surprise. 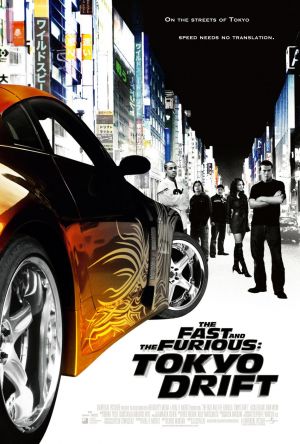