The last time that former visual effects technician Scott Charles Stewart directed Paul Bettany in a motion picture, the result was 2010’s quite literally God-awful “Legion.” Loosely based on the South Korean comic series of the same name, 2011’s Priest is an improvement over “Legion” . . . but not by much. As befitting of a former effects technician, director Stewart only seems to think in visual terms without any thought towards narrative, tension or characterization. While Stewart is visibly beginning to improve as an action filmmaker, Priest is dull and derivative; suffering from substandard screenwriting and bland acting. Fortuitously, the film flopped when it invaded cinema screens, so perhaps there is justice in the world.

For centuries, war has waged between humans and vampires. In response, the Catholic Church trained a cadre of priests to fight with superhuman, ninja-like skill — whittling down the vampire population until peace could be restored and the bloodsuckers were relegated to reservations. With victory finally secured, the church disbanded the priesthood, leaving them to fend for themselves with limited job skills. Living in obscurity, the eponymous Priest (Bettany) learns that his niece Lucy (Collins) has been kidnapped by a pack of vampires led by an outlaw known as Black Hat (Urban). Priest comes out of retirement to find Lucy with the help of the local Sheriff Hicks (Gigandet). Unfortunately for Priest, his decision puts him in violation of the Church’s laws; meaning that he is turning his back on God. Suffice it to say, things progress is a thoroughly clichéd fashion, with very rare deviations from standard action movie tropes.

I put this question to the filmmakers: Did movie-goers really need a gothic vampire reimagining of John Ford’s classic western “The Searchers?” Borrowing barely a sliver from the graphic novel on which the film is based, writer Cory Goodman and director Stewart have created a vampiric update of “The Searchers” with a bunch of additional influences. Priest can best be described as a tasteless cocktail that was mixed by a rookie bartender — it combines “The Searchers” with Catholicism, “Blade Runner,” “Van Helsing,” Sergio Leone, “Underworld” and “Mad Max.” Not to mention, the vampires look a lot like those licker creatures from “Resident Evil: Apocalypse.” Sure, the combo sounds delicious, and fanboys lacking standards may find it cool, but Priest is a failure — a soulless, over-the-top, unbelievably hammy and lethally cheesy mess with a ridiculously overzealous score and generic dialogue. It’s dangerously streamlined as well — the picture predominantly rewrites vampire lore, adding hives, monstrous queens and hulking guardians, but these ideas are so underexplored and underutilized that you cannot mark this film as anything but a wasted opportunity. 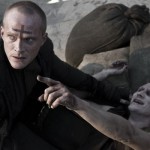 In terms of strengths, the opening credits for the movie showcase a Manga-style animation detailing the epic war fought between humans and vampires. What a shame that nothing else in the movie is quite as inventive as this. The main problem is that the material is played with too much of a straight face. It is possible to accept ludicrousness, but it’s unacceptable for an aggressively moronic movie to pretend that it’s logically sound. Added to this, director Stewart has no understanding of how to effectively build tension, and due to his special effects experience he seemed to only be interested in staging big action scenes without paying adequate attention to the connective tissue. Cory Goodman’s script is of no help due to how barebones it seems to be. How ironic that “Legion” had too much superfluous meat on its bones, whereas Priest was left with insufficient meat. (Whether its barebones nature can be attributed to aggressive editing room tactics or Goodman’s script is a mystery.) The antagonistic vampires, meanwhile, were brought to life with so-so digital effects, removing any sense of threat that they might otherwise impart. Admittedly, the filmmakers pushed the PG-13 rating to its very boundaries and beyond, and it’s staggering that they obtained such a docile rating with so much violence. Nevertheless, there are too many moments of awkward cutaways, keeping the material blatantly censored when it’s crying out for the full R-rated treatment.

Paul Bettany should apply for a restraining order against director Scott Charles Stewart before he gets typecast as a B-movie actor with the emoting skills of someone like Steven Seagal. Bettany played the role of Priest as a series of blank stares and with a monotone line delivery that fails to give the material the intensity and gravitas it demands. His lean physicality may be well-suited for the part, but this ranks among Bettany’s very worst and disinteresting performances to date. (Not to mention, Priest is a human, yet without explanation he is shown to have the skills to literally defy gravity.) As Sheriff Hicks, Cam Gigandet clearly strived to play the role as a Han Solo type, and to his credit he’s not bad, but the young actor comes up short in the personality department. Maggie Q is also present, but it’s clear that she was only used for her skills as a martial artist than a thespian. And finally, Karl Urban barely registers as Black Hat.

Priest was delayed numerous times before ultimately landing in May 2011, and the main reason for the delay was to give the film an unneeded 3-D conversion. There was no compelling reason at all to give the film the extra dimension other than greed, as the film is still bad no matter how you view it. Perhaps at one stage Cory Goodman’s script was something more substantial, with character development and dramatic growth to develop this post-apocalyptic world beyond the action highlight reel that director Stewart ended up knocking together and delivering. Clocking in at about 80 minutes, the storytelling texture of Priest was stripped away in favor of slo-mo action beats that are not intense or exciting enough. On a visceral level, the film has enough action and impressive visuals to hold the interest of most 12-year-old boys or other adolescents, but this type of thing is simply not enough. Priest just exists — it’s not outright horrible and it is watchable to an extent, but it’s nothing remotely memorable. 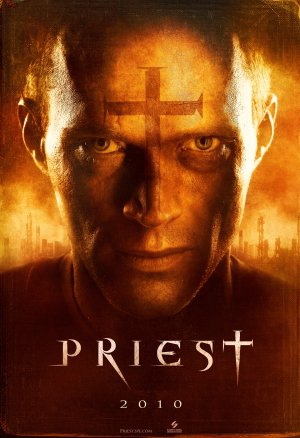