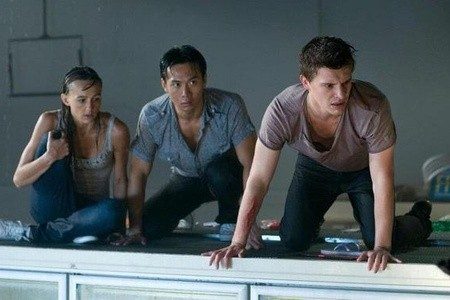 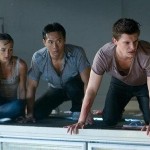 Don’t go in the water.

On paper, Bait 3D sounds like a hoot and a half. After all, the film was co-written and produced by B-movie extraordinaire Russell Mulcahy, and it’s about a supermarket which gets flooded during a tsunami and invaded by sharks. Alas, however, this Australian-produced shark thriller is underwhelming. Only occasionally showing signs of goodness, the picture predominantly sits there on the screen, dull and limp, with its amateur-hour presentation yielding pure boredom. It’s admittedly a step up from the irredeemable “Shark Night 3D” since it’s at least equipped with R-rated levels of gore and language, but the film nevertheless fails to provide that enlivening sense of B-movie lunacy which was nailed by “Piranha 3D” a couple of years ago.

After losing his soon-to-be brother-in-law in a traumatic shark attack, lifeguard Josh (Samuel) also loses his fiancée Tina (Vinson) in a break-up and regresses into a state of depression. Leaving his lifeguard job, Josh takes a lowly position stocking shelves at a local supermarket, his life now entirely devoid of ambition. Unfortunately, one day while Josh is working, Tina enters the supermarket with her new boyfriend. Unfortunately, too, on the very same day, two men attempt to rob the store. And just to top off Josh’s wave of bad luck, an earthquake hits, resulting in a devastating tsunami washing ashore. The store becomes flooded, trapping a small group of survivors inside the building. As the group begins seeking a means of escape, a more immediate threat emerges: Two man-eating great white sharks were washed into the supermarket with them.

The fact that Bait 3D has six credited writers, and that Mulcahy was replaced in the director’s chair in the last minute, seems to suggest that the film had a somewhat troubled production. Added to this, it was actually filmed back in 2010 and delayed several times, and the original synopsis suggested that there would be an assortment of sharks in the water. Instead, we just have two great whites, even though there are still indicators that this may have been a last-minute change (Josh watches a news report at the beginning about a surplus of sharks in local waters). The eventual shark set-up here does not exactly work — there are two main areas in the supermarket, and one great white shark in each area. It sounds too convenient. Plus, great whites are not normally this fierce. Tiger sharks or bull sharks would be far more appropriate for this sort of premise. It may seem foolhardy to ask for realism since that’s the least of the problems of Bait 3D, but the film takes itself a bit too seriously at times, asking us to actually accept this malarkey with a straight face.

The film should have been something like “Deep Blue Sea,” which was cheesy fun in all the right ways. Instead, the enterprise is bland; it’s in desperate need of a schlocky touch to make the experience more enjoyable. Dialogue is the primary downfall of Bait 3D. It would be unreasonable to expect solid, witty dialogue, but the dialogue is not even enjoyable in a cheesy sense — it’s just fucking boring; guaranteed to make you cringe, wince, or want to yell out smartass remarks. Worse, the film concerns itself with a lot of clichéd squabbles and scenarios which fail to give the characters much weight. One of the robbers survives the tsunami, for instance, leading to a great deal of tension between the characters. Plus there’s the awkwardness of Josh being around Tina and her new boyfriend. And so on, and so forth. One of the most awkward moments spotlights a character trying to make sense of the tragedy by believing it to be some kind of karmic justice as punishment for immature selfishness. 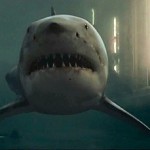 What’s in the water.

As a horror movie, Bait 3D is often sleep-inducing, permeated with predictable jump scares and not much in the way of honest-to-goodness tension. The special effects are often ridiculously slipshod, as well. This is 2012, and realistic shark effects should be achievable right now. Hell, “Deep Blue Sea” showed signs that filmmakers were getting close in the 1990s, but things have only gotten worse fourteen years down the line. The shark effects are astonishingly underwhelming — the mechanical sharks look okay, but the computer-generated fish never look believable, which harms director Kimble Rendall’s consistent attempts at suspense. Heck, the first sighting of a shark in the opening sequence is hilarious, and not in a good way. The phoniness of the sharks is odd, too, as the production values are otherwise solid — the tsunami looks terrific, and the interior supermarket sets are impressively intricate.

The film is occasionally lightened by dark humour, which is mainly provided by Lincoln Lewis’ hilarious turn as sleazebag surfer Kyle. Lewis is easily the best thing in the movie — the rest of the characters are utterly bland, but Lewis keeps firing off hilarious one-liners, and his over-the-top douchebag routine is side-splitting. Alas, Lewis aside, the acting is seriously woeful — it looks as if the filmmakers recruited a bunch of high school drama dropouts. The actors sound stiff, dull and boring, and seem to regurgitate lines of dialogue without any conviction or intensity. It too is a huge problem.

Perhaps the key problem, however, is that the filmmakers weren’t sure where they wanted to take Bait 3D. On the one hand, its premise and a few moments seem to suggest that the film is meant to be taken as cheesy B-movie fun, but most of the film is self-serious, and that’s a huge issue. Rendall is not especially adept at building tension, rendering Bait 3D a stiff, badly-written horror movie. It’s somewhat entertaining, but the film should have been so much more.