Searching for the sublime, we are all explorers in our own way, seeking relief from “tomorrow and tomorrow and tomorrow creeping in this petty pace from day to day.” The quest for such a magical land is what drove British military officer, archaeologist, and explorer Percy Fawcett (Charlie Hunnam, “Crimson Peak”) to search the Amazon jungle looking for a golden city rumored to have predated modern man. Based on David Grann’s non-fiction bestseller of the same name, James Gray’s (“The Immigrant”) epic The Lost City of Z dramatizes Fawcett’s explorations and how chasing his dream led to his disappearance in the jungle in the 1920s, one that remains a mystery to this day.

The film opens as Sir George Goldie (Ian McDiarmid, “Star Wars: Episode III – Revenge of the Sith”) and Sir John Scott Keltie (Clive Francis, “Mr. Turner”), members of the Royal Geographical Society (RGS), ask Fawcett to travel to South America to survey the border between Brazil and Bolivia. Referring to Fawcett as being “unfortunate with his choice of ancestors,” he is told by Goldie that it will be a chance for him to redeem his family name from the disrepute brought on by his alcoholic father. Describing himself as being “impatient with lost years,” Fawcett accepts the assignment even though it means being away from his wife Nina (Sienna Miller, “American Sniper”) who tells him that when he returns, his young children will not know who he is.

The Lost City of Z follows Fawcett and his traveling companions Henry Costin (Robert Pattinson, “Water for Elephants”) and Arthur Manley (Edward Ashley, “In the Heart of the Sea”) on three expeditions into the Amazon between 1906 and 1925. In his first journey, Fawcett is shown as treating the Amazon tribes with respect and affection, although he has been described by biographers as being racist. Fawcett’s role as a representative of colonial forces is downplayed since he was not personally involved in the exploitation of the natives by Europeans but he is reminded of this sad legacy when he comes across a grand opera house in the jungle designed to bring culture to the savages.

It is on his second expedition that his Indian guide tells him about a lost city of Z or Zed, “You will see,” the guide says, “many people lived here once, in a city of gold and maize. White men never discovered it.” Fawcett’s determination to find this city becomes more real when he discovers ancient pottery and cutlery, faces carved into trees, and other artifacts implying the existence of a lost civilization buried deep in the jungle. Attempting to find the source of the Amazon River, the Fawcett party is forced to fight off attacks by Indian tribes and is a witness to cannibalism. Unfortunately, Biologist James Murray (Angus Macfadyen, “Macbeth Unhinged”), one of the traveling companions, is forced to leave the party after putting the lives of Fawcett’s two other associates in danger and, at a subsequent meeting of the Royal Geographic Society, proclaims, “I refuse this madness.”

“What?—savages in Westminster Abbey?” asks one of Fawcett’s colleagues as he presents his findings to the Royal Geographical Society. “Are you insisting on mythical kingdoms of gold?” Fawcett, however, resolves to find his own financing and undertakes another mission, even though his long absences from home causes arguments with his wife and an angry outburst from his son Jack (Tom Holland, “Captain America: Civil War”). The father-son relationship becomes a prominent theme in the latter part of the film and, when wounded in the First World War as an artillery officer, Jack’s visit to see his dad in the hospital is one of the most deeply moving scenes in the film. Jack’s strong need to bind with his father culminates in his accompanying Fawcett on his next journey, but it will be their last.

The Lost City of Z has the look and feel of an old-fashioned epic in the mold of Werner Herzog’s “Fitzcarraldo,” and the film has some moments of physical beauty and compelling action, yet Gray does not take any cinematic risks and the film often borders on the sluggish. As the legendary Fawcett, Hunnam’s performance lacks the charisma and the manic quality of someone who is truly obsessed even though Fawcett himself comes off as a kind and decent man. Though he was met with laughter and ridicule by his peers at the thought of buried cities in the jungle, conventional wisdom has been shattered by new discoveries in the Amazon.

Among the recent finds is that of constructed geometrical earthworks consisting of over 450 circles and squares which have been brought to light by the recent deforestation of the area. No one knows the purpose of these structures, but it is evident that a large scale effort by an unknown civilization was required for their construction. As these finds in the Amazon reveal, Fawcett may be having the last laugh. 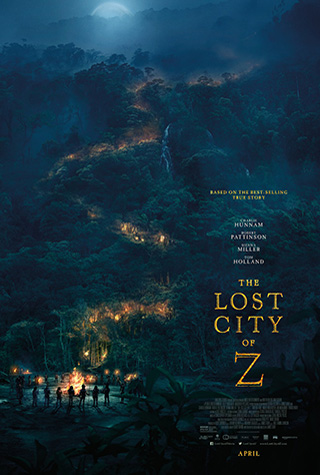