Based on a short story by Katha Pollit, a columnist for the Nation magazine, Learning to Drive is a small movie with a big heart. While the film is risk averse and will not be mistaken for a timeless work of art, its story of two middle-aged people of vastly different backgrounds assisting each other in a time of crisis will leave you with a warm glow. Directed by Isabel Coixet (“Another Me”) with a screenplay by Sarah Kernochan (“Sommersby”), Learning to Drive is about Wendy (Patricia Clarkson, “Maze Runner: The Scorch Trials”), a writer and book critic, whose 21-year marriage to Ted (Jake Weber, “White House Down”) has just ended in a toxic confrontation in a taxicab and has to move outside of her comfort zone to regain her self-confidence.

Deeply distraught by the separation, Wendy wants to get away from New York City to visit her daughter Tasha (Grace Gummer, “The Homesman”), a college student who is working on a farm in Vermont, but doesn’t know how to drive. The driver of the taxi, Darwan Singh Tur (Ben Kingsley, “Ender’s Game”), a former college professor in India and now a part-time driving instructor who was the unwitting witness to the marital breakup, does. After he returns an envelope that Wendy left in his cab, Wendy hires him to provide driving lessons and soon discovers that he is a calming influence who has a lot to teach her other than how to put on the brakes.

Wendy’s devotion to the written word has restricted her willingness to challenge the outside world. Darwan leads her through her fears with patience and charm and encourages her to keep pursuing her goal even after she fails her driving test. During the lessons, however, he has to handle her road rage and lack of self-confidence as well as cope with his own incidents of racism coming from other motorists and pedestrians, one who refers to him as “Osama” and rips the turban from his head. Darwan is about to be married in a union arranged by his family according to Sikh tradition and tells Wendy that his family best knows his needs and that such a crucial decision should not be left to random choice.

When his bride Jasleen (Sarita Choudhury, “The Hunger Games: Mockingjay – Part 2”) arrives from India, however, she is bewildered by her new environment, remains in the apartment, fearful of meeting people and her fears are confirmed when Darwan seems troubled over her lack of education. It is a time of transition for both of them and it will call upon all their resources of patience, tolerance, and understanding to see it through. Learning to Drive is marked by outstanding performances by Clarkson and Kingsley who bring a special understanding to their roles and put us in touch with the beauty of sharing who we are with others, even when it is uncomfortable to do so. 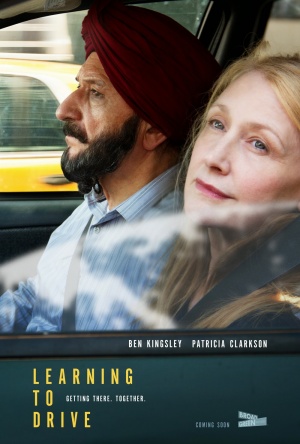