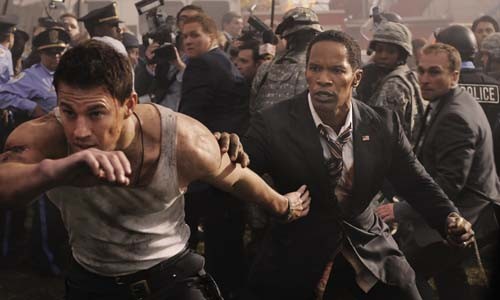 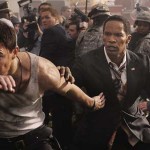 Leading the President to safety.

I suppose I could just copy and paste my review of “Olympus Has Fallen” from two months ago and it would suffice to fill this space as well as describe the latest installment of another film about an attack upon the residence of the President of the United States. I could, but there are certainly elements of the two movies that, while quite similar, are also poles apart.

This newest version, White House Down (directed by Roland Emmerich, “Anonymous“) has much more humor than the Gerard Butler vehicle. Of course, much of it is so extremely unintentional, that I would call this one of the funniest films of the year (easily beating out would be contenders like “Identity Thief” and “The Hangover Part 3” on the Laugh-Meter). The problem, though, much of it is supposed to be taken deadly serious, but the situations are so patently ridiculous, the acting is so far over the top, the characters are so cliché and the denouement so violently ludicrous that one has no choice but snicker their way through this drivel — just to get through it.

Plot, oh I guess I can try to describe White House Down as a “Die Hard” meets “Independence Day” (a picture Emmerich produced, by the way) meets any number of movies in which a sad-sack loser ends up as the savior of the free world. Here, Capitol Policeman John Cale has all of the Hollywood flaws that make us love him, such as a stellar war record but never can stick with a job and has no respect for authority. Played by the baby-faced Channing Tatum (“G.I. Joe: Retaliation“), he happens to be at the right place at the wrong time: In the White House at a Secret Service job interview when all heck breaks loose.

It seems that liberal president Sawyer (think of a cool Barack Obama, played by Jamie Foxx, “Django Unchained“), has decided to push a radical Middle East peace plan by removing all U.S. troops from the region. This, of course, stirs up anger from the defense industry, right-wing zealots and Sawyer’s conservative congressional opposition. After a short build-up, construction workers putting in a new White House theater system show their disdain for the plan by coordinating an attack which secures the facility in just a few short minutes leaving the POTUS helpless with only one ally — John McClain, UH, I mean John CALE.

So, while the bad guys lock down every other space, including clearing all security personnel from the roof, tapping into the nuclear launch code area and capturing the ultra high secret bunker, John and Sawyer get to spend time together discussing their family situations, exchanging bon mots and blowing away various, sundry and non-descript bad guys (yep, even our pinko Chief Executive gets to figuratively exude, “I am the NRA”). 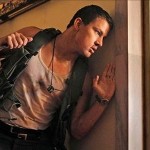 A plot twist involving veteran actors James Woods (the remake of “Straw Dogs“) and Richard Jenkins (“Jack Reacher“), as well as any number of shootings, killings, explosions, tank and helicopter attacks, plane crashes, beatings and the wounding of a conservative Glenn Beck-type TV host and other fun events round out this two-plus hour feast for dimwits.

And don’t even get me started on the whole subplot of Cale’s 11-year old perpetually sourpuss daughter (an absolutely laughable performance by 14-year old Joey King) who has her own blog and manages to film aspects of the takeover and is proclaimed a “beautiful little hero” (that’s actual dialogue, friends).

Other than the decent chemistry between Tatum and Foxx, there is no enjoyment to be found anywhere in White House Down. Bad guys are duly dispatched, the world is once again free from nuclear meltdown and a corn pone ending is wrapped around a safe PG-13 rating that makes everything all right. At least “Olympus Has Fallen” knew its limitations and tried not to exceed them. Emmerich — who out-Michael Bays Michael Bay here — seems completely unconcerned with such trivialities and thus seems quite unaware that this is no doubt one of the stupidest films in a year where the bar has already been lowered to the ground. 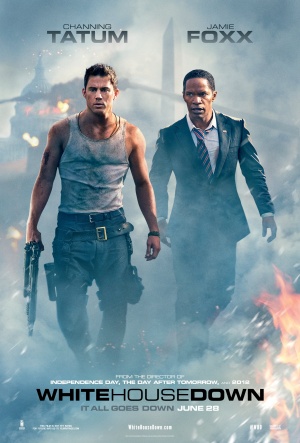