On a sunny drive through the desert, Emily (Anna Hutchison, “The Cabin in the Woods”) and Lesley (Andrea Whitburn, “Lonesome Dove Church”) chat about Emily’s boyfriend’s indiscretions and Lesley’s anticipation of a party weekend. They speed through twists and turns on a narrow roadway in their cherry red Mustang and joke that they’ll run out of beer before they even arrive. Though the GPS lost its signal hours ago, they skid to a stop at a turnoff and decide to try a new route through the not-at-all cheesy or cliché-named Devil’s Pass.

After a few more nondescript miles, they encounter a tow truck (the type that tow semis), become annoyed that they now have to drive more slowly, and blow around the truck. Within minutes, however, the wrecker incredulously speeds up from out of nowhere, cuts off the speeding Mustang, and begins tormenting the girls — waving them on into the path of an oncoming car, blocking a bridge with an old station wagon, and running them off the road in terror. While running in fear for their lives, the girls enter a field, where Emily falls and hits her head on a rock. Coming to, she discovers Lesley has disappeared, and — like any sane person in this situation would — sets off on a chase of her own to find her friend and put a stop to the deadly cat-and-mouse game being played.

There’s no nice way to say this: The movie I just described, Wrecker, is a slipshod, boring, fast-forward inducing rip-off of Steven Spielberg’s 1971 made for TV film “Duel,” which was based on the short story written by the masterful Richard Matheson.

Writing credits for this cheap rehash go to B-horror movie alums, Evan Tylor and director Michael Bafaro, who apparently decided that nuance and suspense weren’t as important as hot chicks in a fast car. Multiple frames are dedicated to beauty shots of them, the scenery, road, and car itself (especially the speedometer as the Ford pushes 100-120 mph on a regular basis). In fact, if all of those shots were pared down to allow some focus on the “plot,” the movie, which runs for an interminable 83 minutes, could fit neatly into a half-hour episode of a bad Tales from the Crypt reboot.

And everything, and I mean EVERYTHING, else that could be construed to be connected to the plot in some way is predictable to a fault — from the loss of cell-phone reception and lack of working landlines EVERYWHERE, to the unhelpful Good Samaritan motorists along the way, to the pentagram and upside-down cross hanging in the cab of the terrorizing truck driver.

Dennis Weaver lured in our sympathies and our apprehensions as we prayed for his survival in 1971; Anna Hutchison’s constant wide-eyed babbling ineptitude just makes you wish her brakes would fail. Eyes roll more easily and far more frequently than vehicles in a film intended to bring terror to the roadways. Hell, the campy classic “Maximum Overdrive” is Oscar-bait compared to this clunker.

Skipping on Wrecker is the safe route to take for sure. 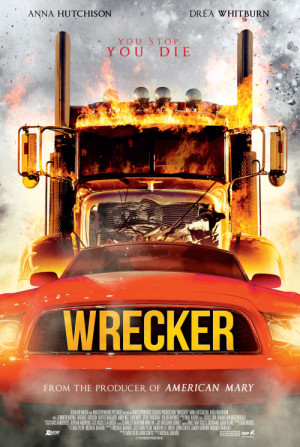