As the brace is removed, and Katniss’ terribly bruised and raw neck is exposed, a horrifying memory descends upon the audience — Peeta loathes and attacked our heroine at the end of “The Hunger Games: Mockingjay Part 1.” We begin The Hunger Games: Mockingjay – Part 2 shortly thereafter, as Katniss (Jennifer Lawrence, “Silver Linings Playbook”) croaks out her own name, then stubbornly requests to see him once again. In District 13, Katniss watches nervously as Plutarch (Philip Seymour Hoffman, “A Most Wanted Man”) instead sends her sister Prim (Willow Shields, “The Hunger Games: Catching Fire”) to speak with angry, distrustful, abused-by-the-Capitol Peeta (Josh Hutcherson, “Journey 2: The Mysterious Island”). Reminded of how completely he was brainwashed against her, Katniss meets with President Alma Coin (Julianne Moore, “Still Alice”) and requests to be sent to the Capitol. Instead, she is sent to District 2 where she’s required to help sway the Loyalists to the Rebellion’s side. Frustrated by Coin’s use of her as an icon for propaganda films, Katniss stows away on a medical transport to the Capitol, where she joins the front, and focuses on her final goal — the assassination of President Snow (Donald Sutherland, “The Mechanic”). She is added to a squad and joins Gale (Liam Hemsworth, “Paranoia”) and Finnick (Sam Claflin, “The Quiet Ones”) on a dangerous pathway through the desolation of District 1, which the Gamemakers have littered with Pods (hidden attack areas of flamethrowers and machine guns), Peacekeepers (soldiers out to capture and kill rebels), and Mutts (genetically engineered animal “muttations” [sic]).

The Hunger Games: Mockingjay – Part 2 is an incredibly exciting closing chapter to a tale that started three years ago with “The Hunger Games.” Though Suzanne Collins’ third and final novel in the series was adapted into two separate films (an infuriating trend initiated by the “Harry Potter” series), the story is handled exceptionally well and doesn’t feel dragged out, despite the 2 hour and 15 minute runtime of the film. As an audience member, you feel as determined, heartbroken, and angry as Lawrence’s Katniss, and you feel her weariness as she encounters countless refugees, confused citizens, and her fellow rebels that have laid everything upon her shoulders. She truly is the symbol of the revolution and, despite the intensity Moore’s Coin pushes through her every move, Katniss is her own woman. The film is rife with tense scenes of attack and escape, blended with slower, yet just as unnerving, scenes between Katniss and Peeta — have the rebels successfully broken through his reprogramming? Would he really try to kill her, if given the chance? Can Katniss get through to him?

Author Suzanne Collins’ adaptation, combined with a screenplay written by Peter Craig and Danny Strong, brings to life the final installment of a saga that has had audiences and readers captivated by the dystopian world of Panem and a society in the grips of a diabolical leader played ever-so-expertly by Donald Sutherland. The production of each and every district, arena, and bunker are visually stunning, and the story steadily carries the audience along on a breathless adventure that we’re loathe to give up. My sole complaint about about the finale is a very heavy-handed climax that overuses its build-up, draining every last possibility of shock and surprise from a sequence that could have been incredibly powerful. Granted, those of us who read the novels remember the details, but I feel that director Francis Lawrence’s team missed a golden opportunity here. While beautiful to look at and rife with anticipation, the scene could have brought gasps of awe from packed theaters all over the country, but instead, this was a situation comparable to the frustrating film adaptation of Dennis Lehane’s fantastic novel “Shutter Island,” a movie that truly embodies the term “obvious editing.” Maybe I’ve just seen too many movies and read too many books, but I think there’s something precious in a well-laid surprise. When you’ve got something great under your hat, keep it there until the very last minute. Your audience will thank you for it!

With that being said, the final games have been played, the final battles have been won, and we can return home, knowing our efforts have not been in vain. The Hunger Games: Mockingjay – Part 2 is a fitting final chapter to a franchise that showed just how good young adult (YA) writing can really be. While it follows in the trend created by “Harry Potter,” “The Hunger Games” corrects a misconception that “Twilight” instilled — YA isn’t just fluff meant to keep teenagers quiet. There’s expert writing and incredible characters and stories for everyone, even adults, to explore. I can’t wait to read (and see!) more. 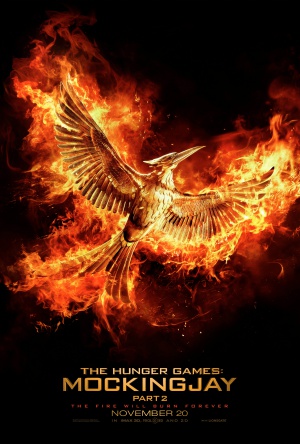