Alex Garland’s Annihilation is a complex puzzle, mixing the extraterrestrial with the most microbial elements of humanity. Its characterization is strong throughout — as its themes are mirrored in its leading lady — but its most promising components come in the form of visual metaphors. They’re scattered strategically throughout the 115-minute science fiction thinker.

Where Denis Villeneuve’s 2016 sci-fi thriller “Arrival” succeeded in capturing our often-skewed perception of time, raw grief, the existence of a higher power and the expansive depths of the universe, Garland’s (“Ex Machina”) equally heady Annihilation compresses human emotion into lichen and mutating cells. As one of his prominent characters, psychologist Dr. Ventress (Jennifer Jason Leigh, “The Hateful Eight”) aptly points out, systematic annihilation — within what’s known as “the Shimmer” — is the careful segmentation of the human form. Garland captures that seed and injects a world of DNA refraction, cross-breeding flowers, humanoid plants and the jumbled subconscious. Nevertheless, what emerges from this brimming world of self-destruction is a spirited film carrying a distinct message propped up by a sometimes compelling, other times comical setting.

It begins as Lena (Natalie Portman, “Jackie”), an ex-military biologist, copes with the departure and mysterious return of her mission-oriented husband, Kane (Oscar Isaac, “Star Wars: The Last Jedi”). She quickly learns that Kane was a part of a covert mission inside “the Shimmer” — which is feeding on the landscape and consuming all those who enter. As a way to understand her husband’s previous mission and the ravenous void, Lena decides to enter “the Shimmer” herself, in an expedition led by Ventress. The team is also composed of Anya Thorensen (Gina Rodriguez, “Deepwater Horizon”), a paramedic, Josie Radek (Tessa Thompson, “Thor: Ragnarok”), a physicist and Cass Sheppard (Tuva Novotny, “Borg McEnroe”), an anthropologist.

The expeditionary force soon learns that “the Shimmer” is no laughing matter — as it scrambles brains and is likened to severe dementia. But Ventress and Lena are poised to make it to the Lighthouse, epicenter and apparent stronghold of “the Shimmer.” To do so, they’ll battle mutated animals and themselves, as they discover how quickly one can succumb to their own weaknesses. Lena must battle her own insecurities to reemerge from this metaphysical world.

There is something special about Garland’s script, based on the novel of the same name by Jeff VanderMeer, especially as it relates to self-reflection, disdain and even romance. Garland and cinematographer Rob Hardy literally translate these qualities into colorful frames spanning the entire visible spectrum. While the world-building often succeeds, the direct relation to the human visitors of “the Shimmer” is an even stronger through-line. That is, “the Shimmer” — which looks like a giant bubble engulfing Florida — holds a mirror to society more than it does capture a tale of the extraterrestrial.

While much of the script is cerebral by nature, its stronger attributes spill out from the subtext and metaphors that linger not too far beneath the surface. To deconstruct the film and question its societal relevance is a demanding task, and one that may require a careful second viewing. But, the characters that inhabit this Shimmer propel Annihilation. Lena is portrayed by an always dependable Portman, and Ventress’ character is brought to life nicely by a well-cast Leigh, who’s always one to deliver a stern but immersive performance. The remainder of the cast is strong, namely Isaac as the tarnished Kane, but not extraordinary.

As the film builds toward its (anti?) climactic moment at the heart of “the Shimmer,” it’s boosted by a magnificent, pulsating score from Geoff Barrow and Ben Salisbury. The music is both similar to Jóhann Jóhannsson’s score in “Arrival,” and vastly different from it.

With most of its production values strong (some third-act visuals don’t seem to match tonally), and the engrossing accompanying music, Annihilation is a well-rooted installment in the burgeoning studio sci-fi reawakening. If the trend continues, too, Garland should be embraced with open arms, as his directed films avoid many of the studio genre traps and confront challenging topics head on — whether by droids or cancerous, world-eating prisms.

'Movie Review: Annihilation (2018)' has no comments 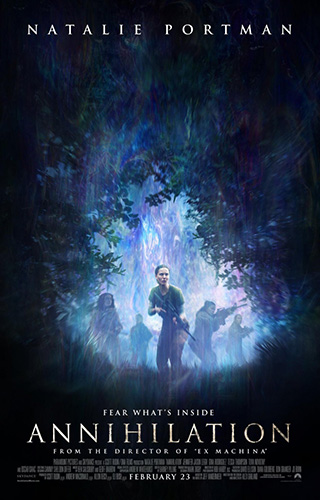