It’s been a while since there has been a worthwhile feel-good movie released into the theaters. Last ones that come to mind are “Rudy,” “Lucas” and who can forget, “Rocky.” “Seabiscuit” doesn’t count.

Interestingly enough, the plot of Invincible follows amazingly close to “Rocky.” A Philadelphia son, down on his luck (no money, no wife, no skills) gets a chance of a lifetime, when he is signed to play special teams on the Philadelphia Eagles (instead of boxing the heavyweight champion). Even more amazing is that both movies are based off of true stories! Vince Papale in Invincible and Chuck Wepner in “Rocky.” That’s basically where the similarities end, yet has made it awfully easy to review.

The good: The acting. Mark Wahlberg as Vince Papale has come a long way since showing his briefs for Calvin Klein ads. Even though I will always see him as Dirk Diggler, he definitely played this role well. Of course the role wasn’t overly difficult to play, but nonetheless, it was done well.

The plot. I don’t care if you are a mass murdering douchebag, everyone has some room in their heart for an underdog movie. Everyone. Invincible is a good rags-to-riches story.

Realism. The movie hits the pulse of the true Philadelphia fan. They simply love their teams to the very end. Oh they might hoot and holler about how bad they play and about how expensive their shitty seats are, but game after game, the stands are ALWAYS filled. And as said previously, Mark Wahlberg came across as a likable, real individual.

Now for the bad shit.

The rest of the acting. I’m not necessarily trying to say the other actors sucked dick, rather I’m saying there wasn’t any other real acting parts to be had. Although Greg Kinnear spent time with Dick Vermeil to get his mannerisms down, his part wasn’t all that impressive. Everyone else in the movie was relegated to a minor bit-part. The film needed more support from the cast.

The plot. Although, I like a good rags-to-riches movie (especially a true one) and I mentioned it as a positive, it’s been done before. And quite frankly, it’s been done better (see opening paragraph, minus “Lucas”). These types of movies will always be compared to the ultimate loser to winner movie: “Rocky.” And with so many similarities between them, Invincible doesn’t stand a chance.

Even saying that, this movie will still give you a warm feeling inside. It will still put a smile on your face, when you realize that sometimes lightning can be caught in a bottle and the little man can overcome great odds. It ain’t no “Rocky” or shit it ain’t no “Rudy” either, but it can hold it’s head high among those movies. And it will definitely get you laid if you watch it with your significant other. 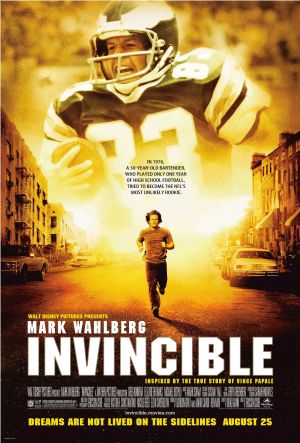