Following the release of “Lady Bird,” Anne Helen Petersen wrote a moving essay on the supporting roles of mothers in relation to their daughters’ central stories entitled “Moms Are Main Characters Too.” Petersen writes, “But something you learn after high school is that, without the momentousness of ‘firsts’ . . . and societally ordained milestones . . ., growth occurs in much smaller, much more incremental and counter-intuitive ways. And most of these moments are invisible to everyone save your deepest self.” While drawing a comparison between Greta Gerwig’s Sacramento-set, semi-autobiographical masterpiece (one of my favorites of the year) may seem strange, I couldn’t help being reminded of that bond (and cinema’s uncanny knack for drawing curious connections) as I encountered the Georgian film My Happy Family.

Manana (Ia Shugliashvili, “Sleeping Lessons”) — the motherly main character of this story — is a wife and mother of two, although not the matriarch of her happy family. That role belongs to her own mother, who is the head of the household occupied by Manana’s entire family, including mother, father, husband Soso (Merab Ninidze, “Bridge of Spies”), son, daughter, and son-in-law. The house is cramped and crowded. There is a large wardrobe in the bedroom in which everyone keeps their clothes — however inconvenient for that night’s sleeping guests — because it is too heavy to move. For the past 50 or so years, Manana has found herself in a similar position — too weighed down to move from her family home. My Happy Family represents her coming-of-age tale during an age so often overlooked by and invisible to those in the orbit of her world.

Directors Nana Ekvtimishvili and Simon Groß with cinematographer Tudor Vladimir Panduru strike this balance in the way Manana is filmed. Manana’s invisibility to her family is captured in the empty seat at the dinner table during a noisy affair where everyone begins eating without her despite claims that they were waiting for her. Her presence is more often than not a nuisance to her daughter (noisily rifling through the shared wardrobe in early morning hours) and mother (not knowing the difference between herbs when shopping). When not being misunderstood or criticized by her family, Manana goes unseen and unnoticed by those around her, but Panduru’s camera always finds her. She is central and focused in frame, sometimes to the detriment of her background surroundings and supporting characters, who are shot half out of frame or removed entirely. After a life lived on the margins, Manana is a main character now, too.

In her professional life, Manana stands front and center as she lectures her class on The Martyrdom of the Holy Queen Shushanik — the earliest surviving extant piece of Georgian literature. The manuscript describes the martyrdom of Saint Shushanik, an Armenian noblewoman, at the hand of her spouse, high prince Varsken. She was killed by him after refusing to submit to his order to abandon her Christian faith. Whether the text can be read as a simple family drama or goes beyond those restrictive bounds since the main conflict is religiously motivated is a question up for discussion in her classroom. Beyond that, Manana’s conflicts seem to qualify as family drama, though, of course, there is nothing simple about it.

Just as Manana idles between the roles of mother and daughter, she also awkwardly straddles the line between teacher and student. This dichotomy is observed in her interactions with two young women who also happen to be struggling with marital discontent. Conversations about life and love carried out with her young, female student and her slightly older daughter are clouded by Manana’s judgment and misjudgments. On the one hand, she aims to protect her daughter by the projecting of her own experience. On the other, she sees herself in the resolute student who unwittingly serves as an impetus for Manana’s own life change. It is through these cross-generational exchanges that Tolstoy’s familiar familial analogy at long last gains credence. Every unhappy family really is unhappy in its own way.

Embarking on her journey of sense of self rediscovery, Manana begins experiencing these so-called milestones, these smaller incremental signs of growth. She moves out of the shared apartment into one of her own. She learns guitar and how to cook. She reconnects with old friends and schoolmates. She transfers tomato seedlings to individual pots. They, as well as she, flourish on their own. In perhaps my favorite scene, the warm Georgian wind rustles the trees outside Manana’s double balconies as she plays loud music (Mozart’s thrilling “Rondo Alla Turca”) and indulges in a slice of cake before dinner (an act deliberately chosen for its defiance of her mother’s prior nitpicking). We are treated to the small but transcendent joy of a slice of cake, enjoyed alone, when the light is just right and the world seems to align. Again calling to mind an exchange between Lady Bird and her mother, Marion: “I want you to be the very best version of yourself that you can be.” “What if this is the best version?” By the final frame of My Happy Family, I like to think Manana has found hers.

Throughout My Happy Family, music is played and performed by the characters. The selections are beautifully instrumental in echoing the emotional tenor of the film, be it joyous or heartbroken. One such celebration comes when Manana and Soso’s son announces his engagement. Their soon-to-be daughter-in-law moves into the shared apartment. Their daughter gives the fiancée a tour and the audience a further sense of people both joining and leaving a family. During an emotional reckoning with her husband, Soso remarks that he thought his home was with Manana and their children — an ideological concept more than a place to live. This entire time we’ve been concerned with her growth and autonomy and, until now, failed to realize that he’s never had the chance to strike out on his own either. Having each migrated from one family home to another, they’ve never lived alone, together. Maybe now is their chance for happiness. 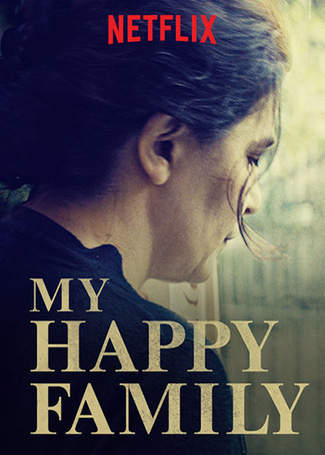