Somber, unrelenting and ultimately life-affirming, A Fantastic Woman is a powerful portrait of Marina Vidal, an eponymous woman and transgender character played fantastically by transgender actress Daniela Vega (“The Guest”), who must navigate institutional and individual intolerance and discrimination when her lover, Orlando (Francisco Reyes, “Neruda”), dies unexpectedly. The circumstances surrounding Orlando’s sudden death raise unwarranted suspicions solely based on the fact that he was a cis man involved with a younger trans woman. Their relationship is equally suspect to Orlando’s family members and Chilean law enforcement, having each made assumptions and prejudgments regarding the pairing.

With the morality and consensuality of her relationship called into question, Marina is not able to just grieve the loss of her partner. Her identity is placed front and center in a series of demeaning discriminatory interactions with her boyfriend’s wounded ex-wife, his bigoted son (who is Marina’s contemporary), and a sexual offenses investigating officer inquiring into possible abuse. Marina was not abused by Orlando. They loved and respected each other. They teased and flirted and danced cheek to cheek. They planned to celebrate Marina’s birthday with a romantic trip to Iguazu Falls. They were happy. Now forced to weather this emotional storm alone (as visualized by a particularly forceful windstorm), Marina builds herself back up in the wake of this loss. Whether cis or trans or nonbinary, that is all identity is: The person you build back up after everything else has torn you down.

Most trans narratives focus on the character’s transformative coming out. A Fantastic Woman takes an interesting and innovative approach in introducing the audience to Marina from the very first frame. That is, until late in the film, when Marina convincingly disguises herself as a boy in order to access gender-specific changing rooms at Orlando’s fancy spa. In gaining entry to this male space and Orlando’s private locker, the film seeks to subvert gender constructs, but may also destabilize Marina (and possibly Daniela) in the process.

Marina’s self-identification is further supported by the use of slightly distorted reflective surfaces: The mirror image of her gazing into a bathroom mirror, the viewer unable to distinguish real Marina from her reflection; the circular compact resting between her legs, masking her pre-op body while reflecting her made-up face back to her; the massive mirror being carried across the street, rippling in the wind, stopping her in her tracks; the tinted rear window of a car parked in an alley; the well lit vanity before a final performance. These mirrored images serve to illustrate the disconnect between how people see us and how we view ourselves. Our only means for observing ourselves as others do are through mirrors and these unreliable reflections staring back. Marina is often met by her reflection. These mirrored abstractions, confirming her physical presence occupying physical space, serve as a direct challenge to the sense of marginalized groups being invisible, underrepresented, and unseen. This is Marina’s reason behind fighting so hard to stay in Orlando’s apartment and attend his funeral. She is sad. She is angry. And she is still here.

As Marina rails against society’s determination to erase or minimize her, Orlando’s abstract presence haunts her throughout the film. He appears to Marina symbolizing her guilt and anger over not being allowed to attend the funeral or given proper space to grieve. Orlando’s ex-wife, Sonia (Aline Küppenheim, “Young and Wild”), has forbade it on the basis of not being able to explain that relationship or Marina’s presence to her young daughter. In one of their many fraught interactions, Sonia refers to Marina as a “chimera.” She, of course, means this as an insult, a striking blow to Marina’s vision of herself and relationship with Orlando. But I found myself struck by the definitive duality of that word. In addition to a mythological monster, a chimera is also a sort of fantastical delusion — a thing that is hoped or wished for but in fact is illusory or impossible to achieve. By this definition, one could argue that true love is the ultimate chimera. Director Sebastián Lelio (“The Year of the Tiger”) aims to prove that Marina and Orlando’s love was much more than a castle in the sky.

Matthew Herbert’s score notably blends old and new musical genres, and tradition with a breakaway, including recognizable salsa and opera performances. Daniela Vega is a true lyric soprano and a revelation in this role. The lyric soprano voice usually plays ingenues and other sympathetic characters in opera. Her voice is her instrument, capable of eliciting admiration and sympathy, and Lelio gives her the ultimate stage on which to perform. The audience is first introduced to Marina mid-salsa, during a performance that showcases her talent as well as the gallows humor within the lyrics. “Your love is like yesterday’s newspaper,” she croons to Orlando, referencing the fleetingness of love and life.

Cinematographer Benjamín Echazarreta uses the latest generation anamorphic lenses to give the film the look of being aesthetically far away from the world to which a transgender character often belongs. Its shots lack the harsh light and realistic aesthetics of other films featuring trans characters (i.e., Sean Baker’s iPhone-shot “Tangerine”). This effect gives it a sense of having been shot during another more glamorous era, showcasing a striking temporal gap that belies the straightforward modernity and topicality of its narrative. Such stylistic flourishes reflect the backward thinking of many of the film’s supporting characters. However, A Fantastic Woman is much more intimate and personal than overtly political. Which is perhaps why it so effectively portrays the inherent physical dangers of being trans and the ways in which retrograde rhetoric has created a debate where there ought not be. If fear of the unknown or misunderstood is the root cause, then hopefully films like this are the antidote.

For me, the name Orlando calls to mind Shakespeare’s “As You Like It,” and the relevance of Jaques’ famous monologue cataloging the seven stages of life: “All the world’s a stage / And all the men and women merely players / They have their exits and their entrances / And one man in his time plays many parts . . .” Jaques speaks to the smallness of human existence within the vast expanse of human experience and the performative nature of personhood. A Fantastic Woman observes and pulls different traditions from different cinematic genres and recombines them to construct something new. It is a movie about the trans experience as a life experience, coming to terms with death and grief, love and acceptance. Above all else, it is a movie about artistic expression and its gift for celebrating the resiliency of the human spirit. 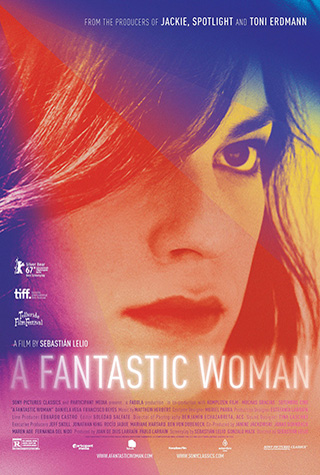