Red Room starts somewhere in Dublin, as a woman named Kyra (Amy Kelly, “Red Rock” TV series) walks home alone at night. A lost cellphone rings on the tarmac. She picks it up. Distracted, she’s grabbed from behind and bundled into a van. She wakes up in a room, locked in chains, along with two other women: Alison (Saoirse Doyle, “Don’t Forget Me”) and Lilly (Sohaila Lindheim, “Class A”).

Their captors are grim, burly men who are watching their every move, waiting for the moment when one of them will be dragged out, tied to a bed, tortured and killed. It’s a snuff gig: Wealthy worldwide wankers bidding top dollar to watch online, with the highest bidder getting to choose the method of malice.

The “Red Room,” from which the title is derived, is where the crimes take place. The web guy is Michael (Eddie Jackson, “The Man Who Invented Christmas”), literally chained to his desk, forced to transmit these horrors to the world. Why this internet-enabled computer whizz isn’t capable of requesting some kind of remote help is anyone’s guess.

Upstairs, as Lilly rages and Alison panics, practically-minded Kyra has plans to escape as soon as possible. But the fearsome patriarch of this grubby crime family, known simply as “Dad” (Brian Fortune, “Game of Thrones” TV series), is a powerful man with powerful associates. As the auction rolls on, time is running out. Can the ladies fight their way out before becoming the next webcam sensation?

Dad’s whole enterprise is like a sensationalist tabloid headline made flesh (and blood — lots of blood). Realistically — and this film does appear to be grounded in reality — it seems like a flimsy and barely sustainable business model to me; but as a metaphor for the internet’s grotesque progression toward more and more extreme content as a way of keeping eyes and wallets open, it’s passable.

To flesh out the limited premise of Red Room — and to avoid inevitable repetition — we get flashbacks to a time prior to the kidnapping. It turns out Kyra is a single mom who was just enjoying a rare night out with friends. In the nightclub, Kyra is portrayed as very shy and wary of her potential suitor — but that doesn’t stop her agreeing to some sexy time in the toilets, from which she is ejected onto the very street where she will meet her demise. The film comes treacherously close to victim-blaming at this point.

While the women do a solid job of portraying fear, anger and resilience, the male actors are far less convincing. Chief henchman Richard (John D’Allesandro, “Cardboard Gangsters”) is particularly wooden, while an offsite Fortune literally phones in his role from his couch. Jackson gives a sniveling and twitchy performance of some merit, but his character makes no sense.

With its flashing, chunky font and screeching, abrasive score, writer-director Stephen Gaffney is evidently aiming for a Gaspar Noé vibe. Not in terms of virtuoso filmmaking — Red Room is determinedly front-lit and stagily directed — but in its intention to outrage. Except Noé’s extremeness is always delivered with purpose. Sadistic violence and a confrontational approach to narrative cinema are not automatically synonymous. And I’m not sure why any serious filmmaker would include a “swish” sound when cutting between present day and the past, like a whimsical edit from “The Big Bang Theory.” 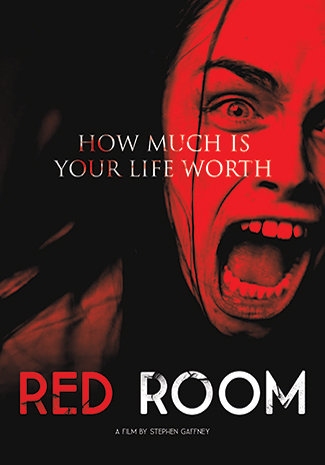