The Romanian found-footage movie Be My Cat: A Film for Anne is about an aspiring filmmaker who goes to some unusual lengths to convince actress Anne Hathaway to appear in one of his films. This sounds like a fine premise for a horror movie, but the result is more of an uninspired, tedious thriller wannabe that’s done in by horrid work in front of and behind the camera by Adrian Tofei.

Tofei plays a director — and I’m using that term loosely, as there’s not much direction to be found — named Adrian who is quite obsessed with Anne Hathaway, loving her in “The Dark Knight Rises.” That movie is doubly important, because Adrian also loves cats, and Hathaway played Catwoman in the finale of Christopher Nolan’s three Batman films. His plan is to shoot a movie with three actresses and send the finished product to Hathaway to somehow prove that he’s a darn good director and thus persuade her to come to Romania. Because he’s too scared to leave his Romanian town, you see.

Adrian raises money via Indigogo online and issues a casting call. Three women answer. The first, Sonya (Sonia Teodoriu), must endure abusive direction from Adrian-the-director, the kind of treatment you might expect from an experienced director who knew what he was talking about, but not from an amateur who’s ostensibly trying to impress one of Hollywood’s elite.

But it turns out that Sonya’s not what Adrian has in mind, so he has Flory (Florentina Hariton) and Alexandra (Alexandra Stroe) show up, separately, for more impromptu shooting. Through all of this hand-held nonsense, it’s apparent that Adrian has no script. This is possibly something that should have been a red flag for the actresses, but it passes unnoticed. Flory has a more-than-passing physical resemblance to Hathaway, although she’s apparently only marginally more interested in making the “movie” than she is in Adrian himself. She thinks he’s a nice guy. Alexandra, a winsome lass, arrives last. She’s also “auditioning” — and I can’t tell you how aggravating it is to have to use scare quotes so often in this review — for Adrian’s movie, although her scene will come after Flory’s.

All the while, Adrian speaks to the camera directly. More specifically, he talks to Anne Hathaway through the camera, as if Hathaway were watching it all live in the comfort of her living room. Adrian even implores the never-seen Hathaway to wait while he retrieves something from another room. No, I’m not sure why he didn’t bring the camera with him, since he brings it everywhere else.

Everything is for Anne. Tofei is playing a character also named Adrian who is self-directing this movie to show Hathaway. And although the difference is obvious for the first half or so of the movie, eventually the boundaries separating the characters and the “real” Adrian from each other are blurred to the point of indistinction. Funny thing is, the director character is screamingly nuts from the start of this fiasco. Kind of like how Jack Nicholson’s character in “The Shining” was crazy from almost the first scene, making his transformation into full-on wack-a-doodle less impressive.

Most of the fault falls on Tofei’s shoulders. The writing is comical, the acting one-dimensional. His Adrian is so unlikable that you quickly root for his entreaty to Hathaway to fail miserably, and this is well before one sees how he treats his actresses. The directing is no better. Whether it’s the unnamed film within the film or Be My Cat: A Film for Anne itself, Tofei’s directing abilities don’t show a lot of promise. He has a trick up his sleeve, that of the found footage aspect, but it’s such a well-worn tool in horror-thrillers that its own potency is neutralized. Escaping the movie fairly unscathed (except by association) are actresses Teodoriu, Hariton, and Stroe — basically the only other participants in the movie, aside from a quick how-do-you-do with Adrian’s mom.

In the opening paragraph, I mentioned the “unusual lengths” that Adrian goes to for his Anne. You can probably figure out for yourself what those lengths are. And since one can clearly see the “thrilling” scenes through the heavy-handed foreshadowing, the element of surprise is lost. The fuzzy line between auteur and maniac is obliterated too early. As a result, Be My Cat: A Film for Anne is dreadfully tedious and fairly unwatchable. 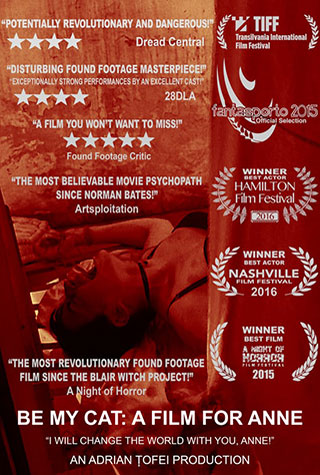