There’s no way in describing what makes Frank & Lola work so well without using a vague, non-descript reasoning like “it feels just right,” but the truth is that it does feel just right. Frank & Lola is all about mood, about tone, and allowing one’s self to get lost in its dark, somber atmosphere. In this sense, writer and director Matthew Ross perfectly hits every necessity that such a story about self-destructive obsession and lies needs: The perfect cast, the perfect cinematography, the perfect score, the perfect dramatic points, and the perfect locations in which to let everything take place. For a feature-length debut, you couldn’t ask for a more promising start.

The titular Frank (Michael Shannon, “Man of Steel”) and Lola (Imogen Poots, “Need for Speed”) meet in a restaurant and, though unclear how much time has passed, the couple soon fall in love. Both are afflicted from a troubled history that neither feels comfortable discussing, but somehow find some solace in each other as they struggle in different parts of their lives. Their romantic reverie soon spoils, however, when Frank becomes increasingly suspicious that Lola is not as faithful as she seems. Constantly trying to hide his anger, Frank’s paranoia deepens when Lola reveals secrets from her life before him, until eventually his thoughts and decisions become increasingly motivated by violence and revenge.

It is as film noir-esque as it may sound and Frank & Lola utilizes the genre’s quintessential tone to great lengths in order to immerse us in Frank’s distrust. Mirroring this is the brilliant way Las Vegas is presented — a slight veneer of class, but a suggestion of seediness and amorality settled comfortably as an undercurrent while the story grows and builds. It’s as if every character is allergic to sunlight because it leaves all their nastiness exposed.

Of course, none of this is possible without its exceptional cast. Michael Shannon was born to play intimidating roles. He can never really play stoic characters because his eyes exude an intensity which makes him always appear threatening, even as the good guy. Frank is far from good, however. It’s impossible to fully sympathize with the character simply because he’s the harbinger of his own dilemma, never allowing himself the opportunity to let the past be where it lies. However, none of the complexity of Shannon’s performance would be possible if not for Imogen Poots being an equally powerful counterpart in their dynamic. Poots is superbly talented in performing characters with fraught personalities, teetering between strong self-assurance and psychological instability. Admittedly, both Frank and Lola feel lacking in dimension but it’s Shannon and Poots who utilize their personas in compensation and elevate the story by doing so.

The problem with most psychosexual dramas is that they can often be quite shallow excuses for some erotica disguising itself as an intellectual exploration of the human condition. While Frank & Lola never feels like that type of movie, it does seem lacking substance underneath its effective style and mood. While it is commendable that the narrative never escalates beyond a realistic and organic growth of cynicism and enmity, it also causes the story to never take any interesting risks or turns. It’s a humble film which pays stylistic homage to its genre’s predecessors but adds nothing new as it draws to an inevitable conclusion.

But that conclusion is a satisfying one. It knows what notes and beats to hit at what point and in such a short space of time in just under 90 minutes. The film is a slow burn, allowing tension to rise gradually and linger enough to crawl under the skin effectively. A desynchronized audio/visual counterpoint of when Frank and Lola first meet returns in the film’s climax with disturbing resonance, standing out as one of the highlights of the overall film. Frank & Lola is a pleasant surprise at the end of the year as Oscar season looms ominously in the distance. If adverse to the dreck that usually goes up for the awards, Matthew Ross’ debut is an enjoyable and dark alternative. 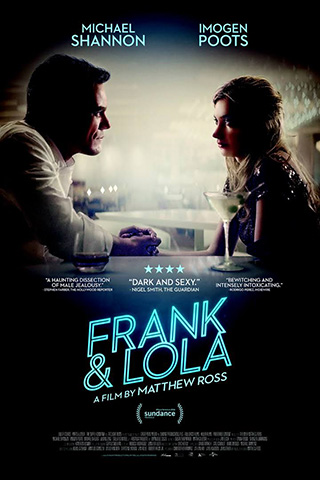