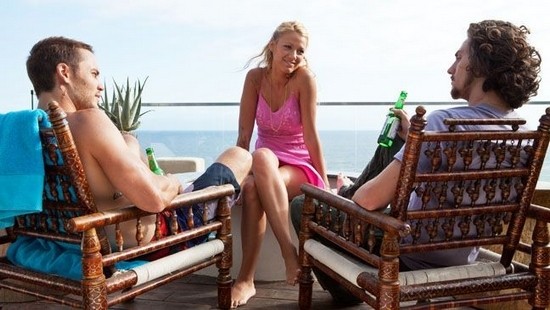 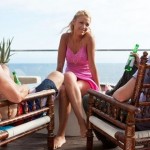 Subtlety has always been a foreign concept to Oliver Stone, even back when he was in great form, so it’s not exactly surprising when various characters make a pitiful attempt at thematic commentary by blatantly spitting out the title in Stone’s latest movie, a wobbly, wandering drug dealers vs. cartels thriller. But while a few utterances of Savages from either end of the movie’s heroes and villains spectrum is just a minor eye-roller, the whole thing crosses over from unsubtle to absolutely obnoxious when narrator O (as in Ophelia, played by bland Blake Lively) decides to dig up a dictionary definition of the titular word and share it with us. Um, really? Maybe Stone can help us cross the street by holding our hand after the movie, too.

This kind of ridiculousness is indicative of Savages as a whole. Choosing quantity over quality, it desperately tries to say something, anything, about drugs, sex, violence, love, and parental responsibility. The list of subjects and themes is long, but Stone’s contributions are short on wit, imagination, and purpose. The movie is just a collection of Stone-isms smashing into each other in hopes that somehow they’ll stumble upon something meaningful by sheer luck. Compiling a bunch of recycled nonsense and shoving it through a familiar rotation of lenses and editing tricks just doesn’t feel fresh or interesting anymore.

The use of multiple film stocks to create a kaleidoscopic visual style was once intriguing, plus it made sense in “Natural Born Killers,” Stone’s 1994 commentary on the glorification of ultraviolence. That movie set its sights on the media and regardless of how muddled the message ended up in the midst of the mayhem, the focus justified the constantly shifting visual landscape. There’s no such reason for the suddenly black-and-white, occasionally grimy photography that randomly warps the imagery in Savages, other than to help chart Stone’s increasingly slippery grip on his creative past.

As lame as Stone’s lazily rehashed flourishes are, his biggest mistake here has less to do with his stale command of the camera and much more to do with the young cast he’s assembled. At the heart of the story reside drug-dealing buddies Ben (Aaron Taylor-Johnson) and Sean (Taylor Kitsch) and their shared girlfriend, the aforementioned O, who is comfortably in love with both of them. With a booming marijuana business and a sprawling home overlooking Laguna Beach, the trio are on top of the world. But that doesn’t mean they’re engaging or fun to watch. In the hands of Taylor-Johnson, Kitsch, and Lively, these characters are drab clichés unable to rise above their simple definitions. Ben is the laid back lover to Sean’s fiery fighter, while O is just there to look pretty and provide pleasure.

The script, written by Shane Salerno, Don Winslow, and Stone (adapted from Winslow’s novel), provides little for the actors to work with, but it still leaves enough room for Taylor-Johnson, Kitsch, and Lively to claim these characters and take them to unexpected places. It’s just too bad that none of them prove capable or at least willing to dig deeper. The characters eventually get to experience harsher emotional shifts when the movie’s conflict arrives in the form of a determined Mexican drug cartel that wants to partner with Ben and Sean. The California boys think it best to duck out of the offer and leave the business behind, but the cartel is on to them and O is soon kidnapped and used as leverage.

This puts Ben and Sean in a difficult position, but Taylor-Johnson and Kitsch can’t communicate the stress and fear their characters are suddenly exposed to, so their plight is merely obvious and unemotional. They struggle to outsmart the villains while embarking on a dangerous journey to rescue O and yet the dramatic underpinnings of the conflict have no resonance when the three protagonists aren’t worth caring about. They’re barely worth remembering, really. Taylor-Johnson has tackled a few different roles in his career and has hinted at some range, but he’s awful here, never more than the generic brains of the operation. Kitsch is arguably worse, though, delivering his third bad performance of the year (his leading man turns in expensive blunders “John Carter” and “Battleship” complete the trifecta) and suggesting once again that he has a dreadful big screen presence.

Lively is predictably dull and boring, although to be fair, she has more of a right to blame the script than anyone else. When she’s not sitting around looking sad, she’s busy delivering her laughable lines in a voice-over so flat and silly that it occasionally feels like a joke with no punch line. The problem is that O considers herself a bit of a poet, but a terrible one, so she’s often rambling on and on about life and love as boiled down to clichés, while making it sound like she’s trying so very hard to find depth and meaning in every word. She even coins the term “wargasm” during a sex scene with Sean. Yup. Wargasm. What a poet.

Mildly amusing supporting turns by Benicio Del Toro as a slimy cartel enforcer with bad hair and John Travolta as a crooked federal agent with almost no hair give the movie brief bits of life, but it’s more a case of veteran performers going through the motions rather comfortably than it is seasoned pros nailing their roles. Salma Hayek shows up as the head of the Mexican cartel and while the casting is inspired, she’s never intimidating or frightening enough to make the villain work. Attempts to humanize her character with a tragic family backstory lead to dramatic dead ends.

So it’s ultimately the characters that sink Savages, but Stone’s excessive style and half-baked ideas definitely help prevent the movie from surfacing. Stone is striving to reclaim his days of being a provocateur, but there’s not even an insightful message to get lost in the mix here. There’s silliness instead, such as the placement of four different Universal Monsters posters in two different background spaces, possibly just a nod from a fan or more likely an attempt to fashion a motif around the horrors of this drug-infested world. Either way, it doesn’t lead anywhere. If there are any positives to be taken from this effort, it’s that Stone can still cause a jolt with a gunshot and stage a scene with some semblance of intensity, but those are minor achievements dwarfed by the immensity of the movie’s shortcomings. Stone lacks originality now and is too busy lazily ripping himself off. So to take a page from O, here is another definition of the word Savages: A pointlessly pitiful Oliver Stone movie. Now if only they’d add that to the dictionary. 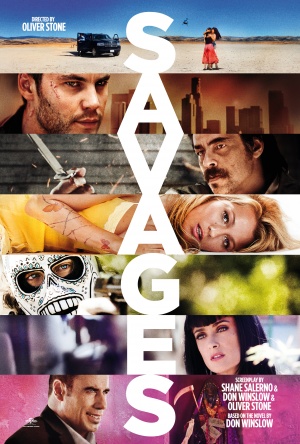