The director’s chair being filled by established actors is becoming an increasingly popular card for Hollywood to pull these days, albeit with wildly varied results.

Up until this point, the receptions of those films in a way mirror the novice auteurs behind the camera; Bradley Cooper’s “A Star Is Born” — perhaps you’ve heard of it? — garnered near-universal acclaim to the tune of multiple Academy Award nominations. It’s a beloved film, much like its director-actor was before its release.

On the flip side, another actor still working under the radar despite having collaborated with the likes of Paul Thomas Anderson, Denis Villeneuve and Steve McQueen quietly directed one of the most intoxicating films of 2018. But Paul Dano’s “Wildlife” was, to a strangely similar degree as its director, seemingly never meant to break into the cultural consciousness in a meaningful way, despite the praise heaped onto it by critics.

So it will be interesting to see how audiences responds to Yardie, the enticing-but-jumbled directorial debut from Idris Elba (“Molly’s Game”), when it’s released in mid-March. Though if merit has any say, it may struggle to hold the attention of movie-watchers. There’s a restlessness at the heart of the film, but in the end that attitude does little more than throw crime, familial drama, music and a sprinkling of Jamaican lore into a pot to create something of underwhelming taste.

Taking a book page out of “City of God” with a narrating protagonist and different factions warring over control of the flow of drugs in a community of slums, Yardie never reaches the bloody highs of Fernando Meirelles’s 2002 crime opus.

In fact, Elba’s movie by comparison is squeaky clean, very rarely reveling in bloodshed despite the violence seemingly always preparing to rear its head. The story of D (a desperate for charisma Aml Ameen, “The Maze Runner”) trying to maneuver a world of guns and drugs while being haunted by the death of his brother — shot to death in a Jamaican “No Man’s Land” while trying to use music as an arbiter of peace between rival gangs — is severely constrained by jarring tonal changes and a lack of focus.

Not working in its favor is how we don’t know if we should respond to the names of its halfway-colorful characters — Raggz (Mark Rhino Smith, “The Hurricane Heist”), King Fox (Sheldon Shepherd, “Better Mus’ Come”), Piper (Fraser James, “Resident Evil: The Final Chapter”), et al. — ironically or seriously, nor the strange, permanent relocation of the plot to London after 20 or so minutes of time spent in Jamaica, an environment we don’t see much in movies to begin with. Elba may not be the next James Bond after all, and this may be the closest we get to it.

Motivations and ambitions are murkier still. D is sent to London to deliver a block of lucrative cocaine for a partner, a mission to keep him from starting trouble at home more than anything. Because just when it seems like he can become a serious player in the business, the impulse to find his brother’s killer takes hold, and D throws punches.

Of course, the same thing happens in England, and D finds himself on the lam as quickly as he arrived. Yardie then takes a hard pivot through a red light and over an overpass into another genre entirely, morphing into something much softer in attitude and prosaic in resolve when D reunites with his childhood flame (Shantol Jackson, “Sprinter”).

He also befriends three musically-driven Londoners who sheepishly try to steal the cocaine from D in a scene that feels like an outtake of “Pineapple Express” for all the reasons I’d have to believe Elba didn’t intend. They’re among the film’s most buoyant B-characters alone (even if they do feel air-dropped in from another film entirely) and also the catalyst for an intriguing plot fusion of hard-times crime and soul-releasing music that doesn’t end up accomplishing much more than making the movie an even more jumbled enigma.

Trying to unpack the medley of genres it tips its toes into is an endeavor worthy of a Department of Defense-level support. Not that other films haven’t been successful at blending genres both long ago and very recently, but Yardie somehow manages to make a puzzle out of jigsaw pieces with dulled edges, forcing them to resemble something far from coherent.

Still at the core is the relationship between D and his long-dead brother, a relationship in which D, we learn, never got the closure he needs to be at peace years later. This version of Yardie, for however rarely it appears, is its most interesting; a ramshackle meditation on the effects of sudden trauma disguised as the story of a young Jamaican man trying to break away from the same path destined for everyone in his community.

The ultimate failing grace of Yardie is its struggle to reside on any tier of stakes or consequences, dispatching seemingly important characters before we get the chance to connect with them and equally doing away with any concept of suspense regarding where D will end up and how the events of his childhood might shape him. It cuts corners to reach narrative signposts with self-indulgent ease, eventually reaching a climax without much gusto.

And by the time gunfire finally does erupt, there’s nothing in the chamber to leave much of an impression, no payoff to be emotionally punctured by when the credits roll.

At least it does so in a scant, merciful 100 minutes. The bricks for a compelling story are there, but not the mortar — someone kept forgetting to bring the right blueprints when Yardie was being conceived, and Elba doesn’t exhibit any filmmaking flair. I would’ve loved to add him to the list of actors-turned-directors whose sophomore projects I’m immediately looking forward to, but I’d rather just take in his commanding on-screen presence once again.

Still, if there’s something to appreciate about Yardie, it’s that there’s a pleasantly distinct sentiment to be felt in 2019 about seeing Jamaicans on-screen, at a time when diverse storytelling is becoming more and more of a call to action. For Elba’s directorial debut, at least, that didn’t translate to much of a memorable film. 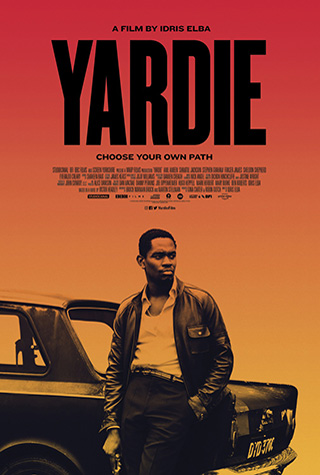