“Uncertain’s a good place to hide,” states a Texan police officer during the first moments of Ewan McNichol and Amanda Sandilands’ debut documentary Uncertain. A very uncanny name for a town stuck on the border of Louisiana and Texas, Uncertain welcomes a mere population of 94 residents and is home of prime fishing location, Caddo Lake. The town appears to be one of those clichéd isolated, remote pockets inhabiting the same people with not a single new face in sight. It is quite lucky that McNichol and Sandilands stumbled somewhere on the border to bring a fascinating depiction of the South and its equally intriguing locals.

A wandering soul, recovering addict and an avid hunter.

These are the three main subjects that Uncertain chooses to chronicle. All embodying the past, present and future of the South, McNichol and Sandilands observe their daily routines in Uncertain and how their small-town lives seemingly reflect the deteriorating eco-system tearing down the economic foundation of their society. Amongst the call for action, a scientist is introduced. His mission to fight the botanic parasite, salvinia, with the aid of weevils is the only given hope for the lakes survival. With all these layered connections of the lake to its town folk, its obvious metaphor the documentarians strongly allude to becomes apparent. Maybe it’s a question of nature over nurture, as all three men are in conflict with their natural surroundings both literally and figuratively.

Most concerned about Caddo Lake is Henry Lewis. Lewis tells his tale of a simple life as a lake guide. He depends solely on the lake as a source of income like most of the town, spending his days drifting across the vegetated lake and pleading the fish to fight against the stubborn parasite. Faith is vital for Lewis. After experiencing immense love and loss, his persistent faith in both religion and the lake showcases the endearing energy of the human spirit. The documentarian’s don’t cast Lewis purely to be a struggling father, however. He adds a historical substance to the otherwise observatory documentary, detailing a story of racial segregation in the Souths’ darker past. A tale of friendship with the supposed enemy and familial conflict over race is one rarely heard making Lewis a truly unique subject to film.

The viewers are also introduced to Lewis’ polar opposite. The quest to shoot down a wild boar becomes imperative for Wayne. Proudly representing the hunting culture of Texas and brandishing Native American tattoos to honor his ancestry, Wayne is portrayed to be a troubled soul finding solace from his criminal past. Observing his nightly rituals of hunting down “Mr.Ed” with the assist of neon-green night vision, the documentarians are leaning towards highlighting his redneck aesthetic, however, these nightly outings seek the natural instinct of hunting and personal perseverance in capturing ones prey. Throw in UFO conspiracy theories and you’ve got Roswell 2.0. Wayne’s story may not be as tied to the lake, but viewers will find closure in his tender and heartbreaking secret.

21-year-old Zach insists a man living in Uncertain at his age may as well just give up. Stricken by diabetes, Zach dreams of a cure to one day put a red cross over a tattoo sprawled across his chest reading “diabeetus for life.” His up-bringing is one truly fascinating aspect of this documentary as he calmly recounts, “We were born to be weirdos,” sighting his unconventional up-bringing from his institutionalized mother. Instantly, the great debate of nature over nurture is real for Zach. He goes on to detail his personal struggle with alcohol addiction and how his home town almost acts as an enabler as there is nothing to really do. Desperate for re-birth, Zach makes the decision to move away from his brothers and find employment with some hope of moderate happiness in Austin. Following this young man’s quest to be more than a product of his environment is both inspiring and hopeful, but there are definite rough currents in his path. Will his upbringing threaten his need for sobriety?

What is truly an accomplishment is the stunning visuals of the lake. The principal photography is truly a visual rarity in capturing the raw beauty and tranquility of Caddo Lake. Eerie and still, the slow pans exhibiting the hypnotic serenity coupled with extreme close-ups of the vegetation in a warped movement are inserted between voice-over interviews and real-life footage. Hand-held camera, night vision footage along with real crime scene photos from Wayne’s arrest succeed in adding such an authentic atmosphere to the otherwise environmentally conscious film. Uncertain is honestly raw and real. It immerses the viewer to transport them into three strikingly different experiences of living. Overall it’s pure, vulnerable with a slight glimmer of hope towards the future for all three men, and of course, the lake. The phrase “treading on troubled waters” remains to be a bit too relevant for these resilient Texans. 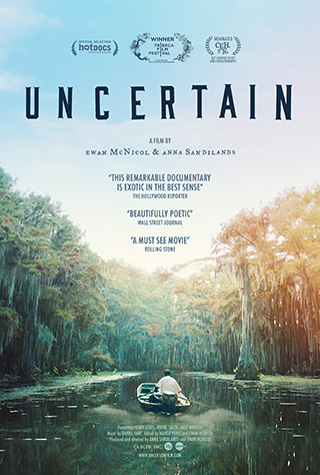