There is no doubt that Eric Stoltz’s latest teen feature film Class Rank won’t exactly mirror the classic formula of “Some Kind of Wonderful” — Stoltz’s breakout role back in 1987 — although it borrows the classic scenario that has the leads asking, “Are we just friends? Or could we be more than just friends?” and the audience swooning. Given Stoltz’s experience grasping the genre back in the 80s, he adapts such a beloved narrative and makes this film an all too familiar teenaged tale of love and friendship, but for this generation — so minus the tomboy drummer and working class mechanic with the foggy lens of 80s rom-coms. But that sincere innocence and vulnerability of those times is something that Stoltz translates for this heart-warming indie comedy.

Bernard Flannigan (Skyler Gisondo, “Vacation”) does not fit in with the other 16-year-olds in his junior class at Livingstone High School, set in humble New Jersey. He is beyond articulate and his indisputable intelligence as well as passion for the environment, and his town, places him at the education board meetings that he has been strictly attending since he was just an eight-year-old boy. Gisondo pays extreme attention in his characterization of playing such a rigid and constructed character, with minute quirks that portray his uniqueness in a small town — rolling his the cuff of his pants up then down after riding his bike it the most routinely fashion is just one example. Every action or sentence is distinct yet robotic, but it’s a deliberate choice that fairs well for the character — exuding maturity, mirroring his intellectual grandfather who is his primary caregiver. The generational divide is charming, as Bernard adapts and grows into an old soul in his rundown wooden home, and stays true to more of a puritan lifestyle. I mean, who doesn’t swoon from the nostalgia of cassette tapes?

One class mate is taken aback by Bernard’s confidence in a room full of adults during one life-changing board meeting in which Bernard insists class ranks should be banished. Veronica Krauss (Olivia Holt, “Cloak & Dagger” TV series) is devastated by her ranking of number 2 in the junior class. Nearly a match for Bernard in her obsessive organisation and ambition, she is the embodiment of a type-A person. Her whole life in and outside of high school is dedicated to attending prestigious Ivy League colleges, especially Yale. Intent with perfecting her college application, she persuades a hesitant Bernard to be the youngest person to run against the unopposed board members in this year’s election, with her being the astute campaign manager.

A friendship blossoms (as expected) between the two tightly wound teens, exposing a sweet shyness and vulnerability. The young actors, Skyler Gisondo and Olivia Holt play of each other’s reactions and expressions, relaying impeccable authenticity and that purity of a teen crush. There’s an adorable awkwardness in the two, despite their maturity and intellect, giving them humility and presenting us with that adolescent awkwardness that without it would just make this film about local politics. So what if there’s an obvious lack of edge, no scandals or gritty depictions of town politics — this is after all a quirky indie comedy, surrounding the lives of high school students. What Class Rank lacks in edge it makes up for with heart.

All the bones are here to make the skeleton of a quintessential teen film — a Friday night party, the upcoming prom and talk of the future after high school. Instead of teen stereotypes that Stoltz embodied in the past, the rebels and popular kids are almost non-existent as realism takes the foreground. Like most teens, there’s a selfish drive in their actions and the realism the film is grounded in makes sure it’s not all romantic montages, it gets down to those conversations and ugly fights and circumstances that need to happen at that ripe age.

Stoltz’s direction — like his leading characters — is precise, clean and laced with intent. Class Rank is simply a well-done, neat production that subtlety pays tribute to vintage movie romance via the brief and sporadic use of a grainy filter. This additional flare, while only randomly used during the film, surprisingly gives the film a 70’s film dimension, maturing the adolescent world Bernard and Veronica don’t seem to match.

Overall, Class Rank is a humble coming of age film with an old soul that proves a number won’t define you or your future. It’s a concept that for most can be a difficult one to grasp, but it triumphs here with the help of an unconventional friendship. 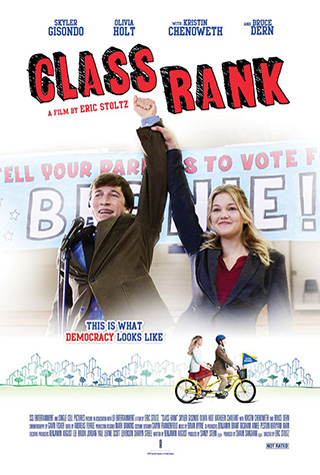