Many filmgoers became aware of the infamous power grab of Pol Pot, leader of the Khmer Rouge, a radical leftist group whose legacy included the direct killing (via execution) or indirect (via universal forced labor and food shortages), of hundreds of thousands, perhaps millions of Cambodians in the 1970s (the subject of the film “The Killing Fields” directed by Roland Joffé). The Khmer Rouge finally lost its political influence on the country in the early 1990s, and since then, the Cambodian nation has remained below the mass media radar, except for human rights organizations and specialists in Southeast Asian politics.

A Cambodian Spring, a two-hour documentary directed by Christopher Kelly, an Irish filmmaker, photographer, and investigative journalist, brings us up to date. And the images and story he presents are not positive ones. The film took nine years to produce, covers a six-year period from 2005 to 2011 and centers on the policy of “land grabbing” by the Cambodian government. Officially, the country is now democratic, but Prime Minister Hun Sen, who appears in the film, has ruled Cambodia since 1994, and it appears evident that members of Cambodia’s National Assembly have business interests that will benefit from this new free market economy.

The film presents images of Sen, who portrays himself as a benevolent leader and a competent administrator. However, it’s clear from Hun Sen’s pronouncements and actions, which are documented in the film, that his modernization efforts, which include developing a tourist industry and attracting local and foreign corporate investments, are dictatorial rather than democratic. His suppression of opponents to his policy of displacing farmers through “land grabbing” is brutal, supported through police intimidation and with the assistance of private security workers that are employed by corporations that have secured rights to lands occupied by Cambodian farmers and fishermen. Dissidents have been jailed, beaten, and murdered.

Kelly divides his film into five parts, structured so that the viewer can see a series of events unfold over a six-year period that impacts the residents of the Boeung Kak Lake region. The area has been determined to be prime Phon Phen real estate, and slated to be turned into land for corporate and hotel development. The events at Boeung Kak Lake, which affect several thousand residents, become a microcosm of the effects of a national policy of land-grabbing that has ousted about 700,000 Cambodians from their land.

Kelly’s camera documents local protests in the area, focusing on the efforts of several grassroots advocates. One is Venerable Luon Sovath, an activist Buddhist monk — a calling which is revealed to be an oxymoron among Cambodian religious circles. He is defrocked by the Supreme Patriarch because of his activism. Apparently, Cambodia’s spiritual leaders consider “speaking truth to power” legitimate only if its monks confine themselves to conventional religious matters. Luon Sovath, a camcorder-carrying documentarian in his own right, is a dedicated man of justice, someone that might be considered a liberation theologist in some countries. In A Cambodian Spring, he is shown confronted by representatives of the religious hierarchy, who threaten him, arrest him, and eventually “defrock” him. This occurs even as Kelly’s camera shows him as a selfless advocate of justice.

Also featured in the film are two other advocates, Tep Vanny and Srev Prov. Although these women are competent organizers and spokespersons (we see them leading rallies and marches against the land grabbing behemoth), the complex relationship among wealthy politicians, business interests, and local representatives, makes it difficult to conclude who is supporting what initiative, especially as frustration builds over the years and the plight of the displaced persons becomes more desperate. Han Sen’s iron fisted tactics leads one protest leader to say that the Khmer Rouge killed the Cambodian people’s bodies, while the present government kills its souls. Is this hyperbole? Not for those displaced and uprooted from their land, and offered token remuneration. It’s the government’s and corporate investors’ way or the highway. But the highway offered to Cambodians leaves them vulnerable and alienated from their homes, and provides them with no economic security.

Christopher Kelly does an excellent job of keeping the story local, while providing a broader picture of a nation that is suffering from a profound imbalance of power. Protesters are shown as they are punished with undue prison sentences; others are beaten and injured at peaceful events, which authorities smartly spin in order to claim they are maintaining law and order. However, the violence of the crack-downs is not justified. The dilemma in Cambodia has not gone unnoticed by everyone. Contemporary Cambodia has become the subject of many meetings and denunciations led by human rights organizations. Groups such as Amnesty International, WITNESS, the International Criminal Court, the Asian Human Rights Commission, among others, have protested these human rights abuses in Cambodia. The film records some of these meetings, which are appropriately solemn, as activists provide substantial evidence of the injustices against displaced Cambodians by the government go unchecked and may even be getting worse.

As Kelly films several human rights conferences, it is difficult not to mentally juxtapose the ethical arguments advanced by international legal activists with the visceral sufferings of the people, and the mercenary, autocratic policies of the Cambodian government. These contrasts make it appear as though the various groups live in separate moral universes, if not on different planets.

Christopher Kelly has created, with A Cambodian Spring, an important personal document that has far-ranging implications. Whether the images of human rights abuse will “stick” in the public’s mind is difficult to predict, as are the outcomes of various international efforts to prosecute members of the kleptocracy which has become the governing philosophy of Cambodia’s political elites. If this raw, direct presentation of the facts fails to help effect change, it’s hard to imagine what will. 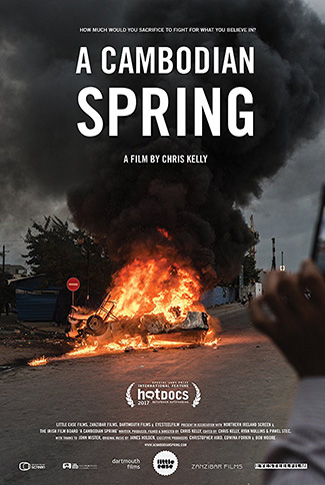