Ignoring Thomas Wolfe’s observation that “You can’t go home again,” brothers Justin (Justin Benson, “Dementia”) and Aaron Smith (Aaron Moorhead, “Contracted: Phase II”), as an expression of completion, return to a California cult from which they had escaped ten years ago. Written and directed by Benson and Moorhead, The Endless is a low-budget psychological drama that juggles elements of horror and science fiction, unfolding in a world where reality is malleable and where past, present, and future exist simultaneously. Opening with a quote from legendary fantasy/horror writer H.P. Lovecraft, “The oldest and strongest kind of fear is fear of the unknown,” the film plays with time loops and apocalyptic visions, but its basic element is the relationship between siblings Aaron and Justin and their desire for mutual support.

Living in poverty and adrift in a world that offers little satisfaction for them, Justin and Aaron become nostalgic for Camp Arcadia when they discover a mysterious video tape with a message from Anna (Callie Hernandez, “Alien: Covenant”), a woman they knew at the commune. Reminded of the sense of security they felt at the camp, the friendships they made, and especially the good food they can almost taste, Aaron suggests that they visit the commune for one day and a skeptical Justin agrees to keep his brother happy. Their return is full of some trepidation as they recall stories about a “death cult,” but when they arrive and find that very little seems to have changed and no one seems to have aged, they believe that they have made a good choice.

As things turn out, however, they probably wish that they had taken more time to consider their decision. Hal (Tate Ellington, “Straight Outta Compton”) greets them first and welcomes them back to the camp. (He says that he’s not really the leader, just someone who talks more than the others). They also meet “Smiling Dave” (David Lawson Jr., “Resolution”) who never speaks presumably because he drilled a hole in his skull to find God, Jennifer Danube (Emily Montague, “Fright Night”), a woman who leaves notes all around requesting quiet, Tim (Lew Temple, “Kidnap”) who forgives Justin for spreading false rumors about the camp after he left, and a perpetually angry fellow named “Shitty Carl” (James Jordan, “Wind River”) whose own hanging corpse keeps him company in his shed.

Almost immediately, the brothers take part in bonding rituals, performing magic tricks with adept Shane Williams (Shane Brady, “Spring”) and participating in a tug of war with an immeasurably long rope that connects to something in the sky that we can only imagine. With the insistent music of Jimmy Lavalle setting a menacing tone, all the fun and games soon morph into eerie happenings, governed by an unseen entity. Birds fly in a pattern in one direction, then instantaneously reverse course and fly in the opposite direction, huge trees decide to fall to the ground without warning, a tiger meanders through an opening in the woods, and other nerve jangling events including the sighting of totems, metallic dragon demons, and a monolith they carved on a tree or stone many years ago. One might sensibly conclude that the Gods must be crazy.

While it may be too facile to say that the time loops are endless, Benson “explains” them this way, “So when you cross into one past, you come to a different loop each time. If you want to be really specific, the radius or diameter of the circles they form, as it gets bigger, the loop gets longer and as they get smaller, the loops get smaller” — or whatever. In spite of the weirdness (or perhaps because of it), Aaron wants to stay another night and then another and the conversation between the brothers about whether to stay or leave becomes central to the film. The not overly friendly cosmic force, however, has something to say in the proceedings and no matter how much the brothers try to leave, they find themselves right back where they started.

The Endless is not a typical in-your-face horror film that leaves blood splattered in your lap, but a much more cerebral experience in which the characters are people you can recognize from your own life, people that you can care about. Although some of the scares come across as being contrived and unconvincing, there are enough thrills to keep you involved from beginning to end. Though its message of forgiveness resonates as does the growing connection between Aaron and Justin, to fully understand its message, stay tuned for the inevitable sequels. They could be endless. 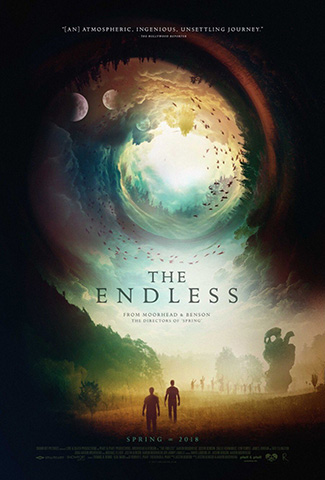