Gogo (Michael S. New, “Night Kill”), a wacky Bangkok taxi driver straight out of a “Hangover” sequel, picks up Jim (James Landry Hébert, “Gangster Squad”) and Julie (Scout Taylor-Compton, “Halloween”) from the airport. They’re a happy-go-lucky American couple who unfortunately haven’t seen the prologue for Ghost House, in which a homeless witch shoves her fist down a blonde girl’s throat in a back-alley. I guess the blonde must have knocked over a “ghost house.” These are small model houses which are kept on Thai porches so that ghosts don’t come indoors and haunt your home.

In their hotel, Jim and Julie meet British buddies Robert (Russell Geoffrey Banks, “Who’s Watching Oliver”) and Bill (Rich Lee Gray). You’d think they’d sense something’s wrong — Robert is speaking his lines like he’s reading a cereal box. But no. The cockney lads take Jim and Julie to a strip bar, where Jim undergoes a sudden character transformation and leaves his new fiancé on the sidewalk outside. In the midst of their ensuing argument, Jim and Julie decide to go with these complete strangers to a remote woodland, where they are dumped at a ghost house graveyard. Julie accidentally swallows the Bride in Black from “Insidious.”

Thereafter it’s a case of trying to find a mystic healer for Julie, while Jim attempts to uncover the nature of the curse. It turns out that a Japanese woman named Watabe (Wen-Chu Yang) married a Thai man, who then had an affair with his servant. Out of revenge, Watabe tried to incinerate the adulterous pair, but she missed and burned herself alive.

Like Jason Zada’s abysmal “The Forest,” Ghost House takes a genuinely creepy piece of local folklore and turns it into a grotesquely Westernized, sub-Raimian exercise in crash-cutting. “Welcome to Thailand!” with its crazy traffic and gaudy neon and shark fin soup; where local people are reduced to sidekicks, shamans, expository mouthpieces and translators; and the otherness of Thai culture and Asian faces are employed by foreign filmmakers as agents of fear. Sinister, indeed.

The witch herself uses the standard issue, crook-limbed, drunk robot movement, but also has the advantage of being able to jump cut her way across rooms. Her rules are unreliable, though. She’s sometimes keen to make an entrance, slowly slithering under a door or scratching at a window; other times, she’ll simply appear on Julie’s shoulder like a scary backpack. We should stop calling these incidents jump scares. They’re not scary, they’re startling.

On top of her witch woes, Julie seems to be switching back and forth with the spirit world. So, alongside the big primary colored swathes of the aforementioned “Insidious” there are shades of Christophe Gans’ “Silent Hill.” As if aware of the limitations of its derivative witchcrafting (complete with rote Pendereckian orchestral screeching), the film gets bogged down in its equally boring mystery aspect. And boring is the word. This is a boring movie about a boring couple caught up in entirely generic horror events. One sequence has, in quick succession, a creepy bath scene followed by a creepy mirror scene followed by a creepy looking-through-photos scene. Ghost House is an exercise in listless tickboxing, burdened further by its grimdark, anti-fun tone.

The characters also act like they’re in a horror movie. In one scene, the lights go out in the entire building. Julie leaves the room and there’s a fire exit right there. But no, she chooses instead to venture down the dark corridor. She comes across a room in flames — which she finds scary, rather than, say, an emergency. Later, Julie is left alone in a car. She panics, but instead of running to her friends thirty feet away, she sprints into a dark forest and gets lost. The problem with such moments, which are so rife in this genre, is that they undermine our empathy; and a lack of empathy reduces the extent to which we care about characters; and the less we care the less there is at stake; ergo, the less scared we are.

And it’s not just Julie. Single-handedly leading the investigation into the mystery, Jim foregoes police or embassy assistance and fancies himself a hard-boiled detective, rampaging through Bangkok with a pistol, demanding answers. At one point he leaves his critically ill wife at hospital to race to the airport on the off-chance he’ll bump into those dastardly Brits and confront them. For us it’s a doubly bad decision because it results in one of the most dramatically risible scenes in the film.

Jim’s odyssey is not so much a descent into the dark underbelly of Bangkok and more of an ascent toward the summit of implausibility. He prowls through an S&M club — which looks like a school disco directed by Gaspar Noe — to meet with a typically grotty Mark Boone Jr. (“30 Days of Night”), who explains that while ghosts exist in the East, there are “no ghosts in the aisles of Walmart”. Huh. Perhaps Thailand needs fewer ghost houses and more Walmarts.

There is one exceptional scene where Jim considers transmitting Watabe’s curse to another nice American couple, and he is torn by guilt. It’s a rare example of exposition through character action and interaction. But generally the script is drably untextured; efficient in presenting a mystery but hopeless in telling a story or illuminating characters. And despite the best efforts of the actors (Taylor-Compton is a passable scream queen and Landry Hébert is enjoyably fraught), acting against bad writing is an unwinnable battle.

Ending with a poorly-implemented horror sting, Ghost House leaves a bad taste, and not only for its racial stereotyping and cultural mismanagement. Efficient direction and functional editing aside, it’s catastrophically clichéd and crippled by a thudding script and a weak supporting cast. Local advice: Don’t let it into your home. 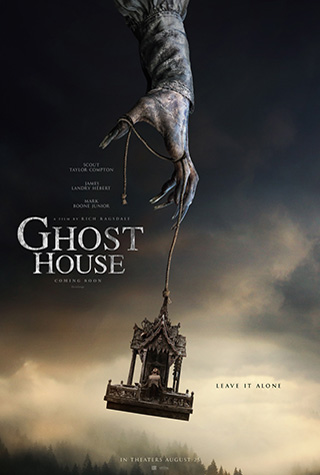