The synopsis of acclaimed German director Werner Herzog’s 2016 thriller Salt and Fire, at first, seems to present a truly intriguing, unique and captivating story — “A renowned scientist is sent to Bolivia on an urgent mission to analyze a looming environmental catastrophe she along with her colleagues are deceived by a man claiming to be a member of the Ministry of Security and are kidnapped by a mysterious group of masked men . . .”

But please, do not be fooled by such a cleverly crafted excerpt, when lurking behind its attractive foreground is a laughable, cringe-worthy and absurd story concerning an ecological disaster and one scientist putting everything on the line to save the planet. From salt. And fire. Ground-breaking. Even the title of the film, Salt and Fire, sounds promising; a comparative name that arouses interest due to two powerful elements in our biosphere. The film, however, is neither powerful nor interesting.

Professor Laura Sommerfeld (Veronica Ferres, “Hector and the Search for Happiness”), an environmental scientist/single-mother (respectively) is abducted along with her two nit-wit colleagues, Dr. Fabio Cavani (Gael García Bernal, “Rosewater”) and Dr. Arnold Meier (Volker Michalowski, “The Grand Budapest Hotel”), by an anonymous agency — a floundering crew that haphazardly roam around in black. Laura’s project on the Diablo disaster — a man-made travesty — captures the attention of the mysterious balaclava-clad Matt Riley (Michael Shannon, “Nocturnal Animals”), who’s character welcomes the most anti-climactic reveal behind a balaclava in recent cinematic history.

The professor and her captor’s relationship reaches near Stockholm syndrome level and the violent kidnapping is nearly but forgotten until Prof. Sommerfeld is deserted on the bare salt flats with two blind twin boys, their difficult birth and eye-sight is later to be explained as an impact of the engulfing presence of the salt. Laura learns to adapt to the living situation and cares for the twins, tapping into that maternal instinct Herzog so desperately wants to sneak in (also indicative from the mind-numbingly pointless monologue she delivers on the pressure of being a mother and a world-saving scientist). She teaches them English, while she learns a few phrases from their mother tongue.

Salt and Fire presents an incomprehensible tale, muddled with bad acting, so forced it becomes amusing. An odd ensemble cast fumbles around the film providing next to no cohesion nor chemistry with each other. The pacing is off and the reactions are either stiff, or completely not believable. The characterization development adds another peculiar dimension to this already strange story. Special mention to a “Dr. Strangelove” inspired bad-guy named Krauss (Lawrence Krauss), a man who is believed to be disabled in a wheelchair, but can actually walk but just chooses not to. Seems legit. Pair all of this with a poorly written, sloppy script — maybe the actors can’t be at fault for delivering an awkward performance, their source material was simply flawed.

Nonsensical monologues that drag on to reach no point of significance don’t even begin to compare to the ridiculous amounts of unnecessary biblical quotations and bizarre one-liners that are meant to be either cryptic, or thought-provoking, leave a strange taste of confusion met with an awkward reaction from the intended receiver. Throw in some diarrhea-inducing dumplings and two blind twin boys deserted on the Bolivian salt flats, this film has no salvation for an at least half-serious approach to an environmental threat.

Perhaps the one saving grace this film offers its bored viewers is the stunning shots of Bolivia’s enchanting salt flats. Its only here that Herzog captures something real and authentic to offer the viewer.

What is really astounding is the fact that Salt and Fire was made in extremely capable hands. This is what’s really disappointing. Herzog’s status as a prominent and influential documentary and filmmaker makes this picture a greater mystery than it already is. From the magnificent over-head shots of the salt flats and the detail to location, Herzog and his team clearly had the resources, budget and know-how, but failed to appropriately put them to use in this so-called “thriller.”

Perhaps with the right angle, this film could have provided an important dialogue on man-made destruction on the earth, but unfortunately no such periods of enlightenment reached the final product. 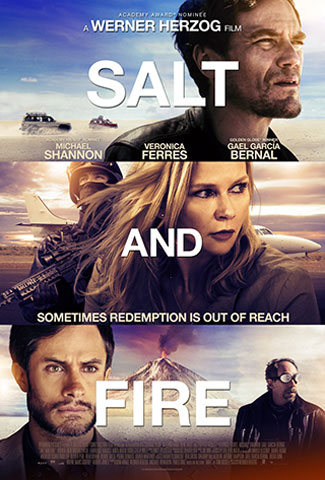