Love. Loss. Regret. Betrayal. Pain. Memory. Revenge. Beauty. These are the oh-so-jolly palate of Nocturnal Animals, Tom Ford’s haunting, ethereal and quite extraordinary second feature. Ford crafts a remarkable, trifurcated narrative with exquisite precision, slipping between the life, memories and imagination of Susan Morrow (Amy Adams, “Arrival”) in a way that demands attention, stirs the emotions and may well leave the viewer enthralled and frustrated in equal parts.

From Shane Valentino’s intricate production design to Joan Sobel’s sometimes rhythmic and sometimes abrupt editing to Seamus McGarvey’s evocative cinematography and Abel Korzeniowski’s haunting score, the sheer level of craft utilized in Nocturnal Animals could smack of artifice. Such artifice could be potentially alienating, but in this case is central to the film’s meaning, as Susan lives in a world of constructs and arrangements, effectively trapped within these structures even as the film slips between them. The house she shares with husband Hutton (Armie Hammer, “The Man from U.N.C.L.E.”) is an elegant scaffold of steel, stone and glass, never seen in its entirety and hardly a place of warmth or affection. Deep focus shots from the entrance hall capture what may be the living room, while the sleek kitchen of marble and chrome provides a site for detente between the distanced spouses.

Despite the Los Angeles setting, coldness is the dominant feel of Susan’s home life, while her work as art gallery owner is no more emotional. The title sequence depicts one of the works in this gallery, and the frankly baffling elements of this artwork set the mood for the film as a whole. We first encounter Susan at the opening of this exhibition, a perfectly sculpted figure isolated in a room filled with people discussing the art work around them. She seems to belong here, almost like a living exhibit that cannot engage with those around her, something to be looked at but not truly seen. This conceit continues throughout the film, as Susan in often framed behind glass or water: Rising out of a bath, standing in a huge shower, gazing out of a window as rain pelts against the pane. The extensive production design is both style and substance, as the formal arrangement of the film expresses the elaborately constructed life of the central character, and also the isolation and hollowness of this life.

The most prominent piece of design is Susan’s glasses, an ornate pair of tortoiseshell spectacles that create a barrier between her and the world even as they provide a route to another world, that of the eponymous novel within the film. Written by Susan’s ex-husband, Edward Sheffield (Jake Gyllenhaal, “Nightcrawler”), the novel is a neo-noir tale set in Texas, where Tony Hastings (also Gyllenhaal) and his family are victims of a terrible crime, after which Tony works with Detective Bobby Andes (Michael Shannon, “Elvis & Nixon”) to pursue the perpetrators. While Susan’s environment is cold and distant, the tale within the tale provides burning heat both literal and emotional in the imaginary sequences in Texas. A late night chase along a highway is grippingly tense, as is the horrifying encounter that follows. McGarvey lenses the Texas landscape in harsh ochre hues, in sharp contrast to the cool colors of Susan’s world. Within this burnt landscape, Tony’s reactions are agonizingly exposed, while Bobby is a chilling presence of narrowed eyes, clenched cigarette and laconic menace. Almost unrecognizable is Aaron Taylor-Johnson (“Godzilla”) as Ray Marcus, leader of the youths Tony and his family encounter, and Taylor-Johnson is deeply disturbing as this apparent psychopath. The clash between these three points of the crime triangle — perpetrator, victim and cop — is a compelling and often distressing narrative, as the sequences of the novel’s action feature tragedy, heartbreak and horror, while Susan’s disturbed reactions likely mirror those of the viewer.

The third strand of the narrative — flashbacks to Susan and Edward’s past relationship — is a blend of the present day events and the narrative of the book. As noted above, Gyllenhaal plays both the writer and the writer’s protagonist, but Adams only plays Susan whereas Tony’s wife Laura is played by Isla Fisher (“The Brothers Grimsby”), the resemblance between the two actresses underlining the parallels between Edward’s novel and his past marriage. Not that the viewer is likely to miss these parallels, as the flashbacks to the marriage follow a similar pattern of decision, difficulty and disaster. The precise design continues, intercutting between Susan reading, scenes in the novel and her earlier conversations with Edward, in a way that mimics the flashes of memory and sudden violence in Edward’s book. A devastating visual composition from Edward’s novel is echoed in a more mundane context in Susan’s world, demonstrating the bleeding of the novel into the surrounding narrative.

Nocturnal Animals is not, however, a pretentious lament of First World problems. Susan is far from a pitiable victim, presented with her own agency, sympathetic and engaging while also being deeply flawed and aware of her own shortcomings. Ford’s film is not so much a tragedy as a highly (but never over) stylized depiction of memory and imagination, at times echoing the best work of David Lynch or Christopher Nolan. For all its mathematical precision, it is a film of mood, emotion and experience, making the internal world visual and communicable, and making sure that we feel everything along with Susan. It is a frequently uncomfortable watch and one that some may find more admirable than enjoyable — indeed I found the conclusion deeply frustrating — but if you let it in, go with it and allow its power to suffuse you, you may find yourself enjoying one of the year’s best films. 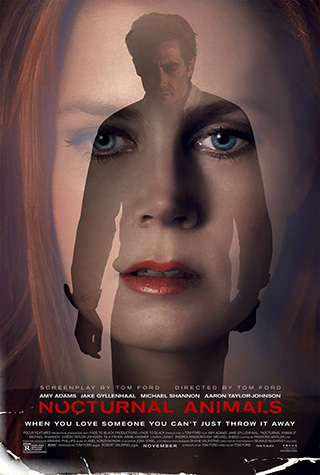