The Possession Experiment, centers around, as you might guess, a possession experiment. But don’t let the lack of creativity in the title sway you into thinking that the filmmakers have saved their imaginations for the rest of the movie. What you have here is a plot that’s both holy and wholly contrived, albeit with some very well done special effects. But, cool visuals aside, the movie is a big pile of nebulous nonsense.

For his Introduction to Western Religions college course, Brandon (Chris Minor, “Divine Appointment”) decides that he’s going to research demonic possessions. He gains a lazy partner for the project in Clay (Jake Brinn), and the two are quickly drawn to a local exorcism of many years ago that occurred in a now-abandoned house not far away. Off they go to the spooky old house, necessarily filming the whole trip, as you do in so many horror movies in this day in age. Things look weird, things feel weird, and the house has the requisite spooky basement with strange symbols on the walls and, of course, an old Ouija board.

The lads leave in a hurry, but Brandon is struck with an inspiration. He sets up a page on a GoFundMe-like site (called, I believe, “Fund Me”) with the following plan: He will undergo a ceremony to allow a demon to take possession of his body. And for a small $10 contribution, he will live stream the whole thing. Sounds like a barrel of laughs, doesn’t it? It sounds wacky, but Brandon insists that all will be on the level. The funding campaign is a huge success, so he hires a medium and some medical support, the latter in the person of the lovely Leda (Nicky Jasper, “Nocturne”), who will be on hand to test Brandon’s vitals and make sure he’s doing just peachy.

The ceremony goes . . . strangely. Objects fall from shelves. The spirit maintains via the board, that its name is “Mama.” The lights come on, even though this is an abandoned house with no electrical power. The medium eventually has enough and flees. But in the end, nothing happens. Brandon remains Brandon. People are disappointed. Brandon’s mom, who’s pretty devout, is upset with him.

But was the whole thing really a failure? Brandon begins to act differently, a little more aggressively. He then learns a secret about his past that conveniently ties in with the possession shenanigans. But the transformation is upon him very suddenly and a few days after the seance, as if the filmmakers wanted the change to be stark but gradual. It doesn’t quite work.

The Possession Experiment involves a lot of coincidences, frankly, lending an unnecessary aura of tidiness to the plot. The movie doesn’t explain Brandon’s sudden mood change/change of heart that occurs before his experiment. It doesn’t explain how Brandon’s mind leaps from point A to point B in arriving at his decision to allow himself to be possessed. It’s not that the plot is intricate and mysterious; it’s that it’s vague and overly simplistic. It starts out very strong (with an opening scene that harkens back to the original possession) but depends way too much on the acting talents of its leads to carry the load. And although Minor, Brinn, and Jasper appear to be game and try their best to sell the movie to the viewer, it could be that they simply lack the gravitas (and experience) to pull it off.

The ending felt like a letdown after a promising premise. Maybe more attention could have been paid to the religious aspect of the plot (the college course is on religion, after all); maybe the links could have been more subtle or not even exist. In the end, The Possession Experiment is, at best, inconclusive.

'Movie Review: The Possession Experiment (2016)' has no comments 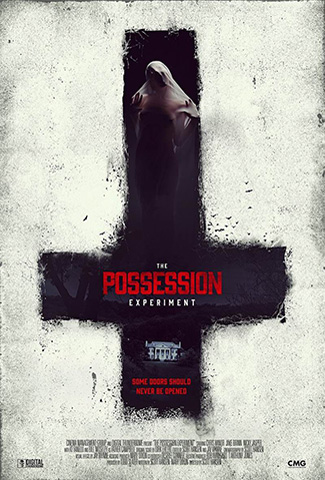