Breaking the cardinal rule of Ouija boards, an unnamed woman lays her hands on the planchette and asks the spirits of Halloween why Robert hasn’t called her yet. Growing tired of the game, she wanders aimlessly around her apartment until she hears a knock at her door. At her feet lies an old VHS tape, curiosity takes over, and she settles in with a glass of wine. What she sees (and viewers as a consequence) is something that isn’t so tasteful.

Most anthologies, including the first “All Hallows’ Eve,” produce three or four short tales of terror; however, All Hallows’ Eve 2 is comprised of eight short vignettes, each lasting only a few minutes. As with any anthology, there are good stories and not-so-good stories, but because they’re so short, your patience holds out much longer than you’d expect. If one story doesn’t click for you, by the time you reach for the remote, a new story has begun. However, there’s a surprisingly even balance of good and bad stories in All Hallows’ Eve 2, which is refreshing for a straight-to-DVD horror film.

One of the highlights is a story called “The Last Halloween,” in which four children go trick or treating in their neighborhood as a ghost, devil, witch, and grim reaper. Their neighborhood, however, has fallen victim to some type of plague or disaster, as each house they approach is stranger than the last. The story is based in psychological suspense, as you wonder (and soon find out) how these children remain so calm in the face of such strange neighbors.

“A Boy’s Life” begins with a boy awakened in the night by strange shuffling noises in his room. He scrambles into bed with his mother, who has told him time and again that there’s nothing to be afraid of. Gradually, we learn more about their family, and why the young boy struggles with night terrors. Elias Benavidez, the writer and director of this tale, includes some softer moments that rise above cheap scares and clichés, despite an ending that, truthfully, detracts from what makes the story special.

The real gems lie in two stories: “Alexia” and “Descent” — both are grounded in psychological torment (which I feel is so much more effective when done right). “Alexia” is a tale about a man whose girlfriend has committed suicide, and he fears he’s the reason she killed herself. Feeling depressed, he lingers on her social media page and chats with a girl who tries to convince him it’s not his fault. Yet his ex-girlfriend’s jealousy still lingers . . . Writer/director Andrés Borghi’s story doesn’t present much clarity about what happens or why, but the events of the tale are more unnerving than most of the others in the film.

Jay Holben’s “Descent” is another psychological story that focuses on a young woman who finds her friend brutally murdered, and discovers the killer is still in the apartment when she arrives. She escapes harm by hiding in the closet until he leaves, but the real terror comes six weeks later when she encounters him in an elevator in her office building. The writing and acting in this piece make it the prize of the bunch; the subtlety of the situation and the multi-faceted layers of tension are really well-crafted, making “Descent” the stand-out of the collection.

As with every collection of short stories, All Hallows’ Eve 2 presents some less-than-stellar tales with the real gems. There’s the wraparound tale that serves no other purpose but to serve up a group of stories, some that are good, and some that are bad, either because they’re too ridiculous to be frightening, or because they’re too underdeveloped to be worthwhile. But since this film delivers far more options than your average anthology, you’re rewarded with increased opportunities to find something you like. There’s a real craft to being able to shock within a short timeframe; some of these tales are well done, and you don’t even have to wait very long for the silly ones to end before you get to the good stuff. 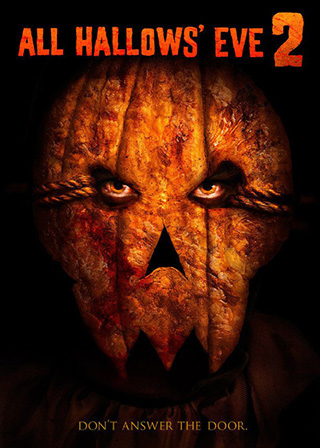