In an effort to recognize every genre and cultural sub-group, Walt Disney Animation Studios has scored again with Moana, a tale recounting how Pacific Islanders traversed the South Seas in search of lands to inhabit. Here, a few archaeological facts are mixed with the Legend of Maui, a demigod/shape-shifter/adventurer who, with his trusty ivory fish hook (a gift from the gods, you see), steals a piece of jade called the Heart of Te Fiti from an island goddess that is lush and beautiful.

As soon as the rock is purloined, however, the land is turned into barren decay and a plague begins to spread to other islands in the region. Meanwhile, Maui (voice of Dwayne Johnson, “San Andreas”) is knocked from the sky, separated from his fish hook and banished to a small rock enclave in the middle of the Oceania for 1,000 years.

After this opening drama, we see Gramma Tala (voice of Rachel House, “Hunt for the Wilderpeople”) scaring small children of their island by relating ancient stories of sea monsters and such; all except little Moana (voice of Auli’i Cravalho, a Hawaiian high school sophomore making her film debut), who is drawn to the sea, even as a baby. Her father, Chief Tui (voice of Temuera Morrison, “Green Lantern”), however, does not want her near the water, and despite being surrounded by it, he harbors a deep fear for his little girl. The addled Gramma, though, knows that the sea has seemingly chosen Moana for something very special indeed.

As she grows and takes upon more of her inherited chiefly responsibilities, Moana discovers that the crops are dying and fish are no longer plentiful.

Unbeknownst to her, it’s the Maui curse creeping up on their own land and only she can do anything about it. Of course, this action involves her taking a boat far across the reef and beyond, finding Maui and forcing him to return the Heart of Te Fiti so plants and vegetation will once again flourish. It’s a task fraught with almost unconquerable obstacles considering that Moana is only 12-years old, Maui is a huge, powerful demigod, plus the Heart and fish hook are lost at the bottom of the sea AND the island of Te Fiti is guarded by a vicious lava monster called Te Ka.

But, since we’re accustomed to Disney films sending their heroes and heroines on these impossible quests, we know things will most likely work out in the end. Led by a friendly and accommodating ocean and accompanied by a deranged chicken (there’s always a weird pet, right?) named “Heihei” (voice of Alan Tudyk, “Trumbo”), she finds the arrogant quasi-deity, still bragging of his great deeds (with clever visual tattoos telling much of these stories), yet refusing to accept the responsibility of the wrong he had done earlier. It’s not only a journey of necessity, it’s also one of self-discovery, for both, as he teaches her to become a “wayfinder,” not just using sailing skills, but her intuition, and she instructs him on the lessons of humility. This oil/water mix continues until the two grudgingly accept one another as necessary to the completion of the journey. This takes place when Moana helps to battle a legion of coconut-like pirates and to retrieve the fish hook from a giant crab (voice of Jemaine Clement, “What We Do in the Shadows”) before facing off against what they believe to be the unbeatable lava demon.

With Cravalho’s reading giving little girls (especially those of South Pacific culture) a sense of empowerment (I would not go as far as to call it a “feminist” picture, however) and Johnson carrying the comedic weight very well, Moana is a very pleasant surprise with a positive message and even a few catchy songs, including “Where We Are,” “Shiny,” “How Far I Will Go,” etc. (soundtrack is by Lin-Manuel Miranda, who, when not rubbing elbows with the POTUS, had time to compose the hit Broadway production of “Hamilton,” Disney composer Mark Mancina, as well as the classic work of Opetaia Foa’i, the lead singer of the band, Te Vaka).

All of this is wonderful and all, but the real treat is the amazingly lifelike, colorful and superb animation that we’ve become used to with most Disney and Pixar films. Manuel Arenas (“Zootopia”), Neysa Bove (the upcoming “Gigantic”) and their army of talented animators, bring the oceans, islands, villages, tropical vegetation, storms at sea, the almost electric blues, greens and other shades and visuals to probably the highest acme of any Disney animated feature in recent times.

Then there is the writing, utilizing the talents of eight writers and four co-directors (including Ron Clements, Don Hall, John Musker and Chris Williams, all of whom are also credited with the original story), which weaves a funny story, but with plenty of oomph on impact.

About the only people who will be disappointed with Moana are those expecting a love interest for the young heroine or a typical Disney princess tale. Still, it’s a rather simple message that girls can do it for themselves, no matter how young and inexperienced they may be; and that no father or hidden legend can stop them from reaching their potential. 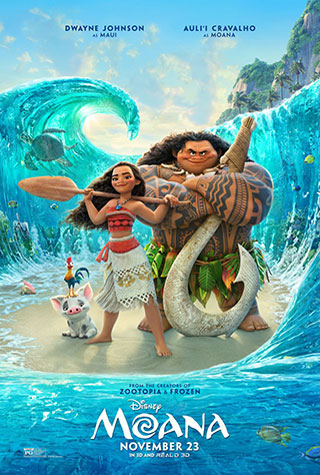