Beth and Kate (Jocelin Donahue, “Knight of Cups”) are twins, and each is experiencing her late 20s in quite a different way. Kate is stable, confident and popular; Beth, living with her parents, is nervous and reclusive, and fearful of relapse. Beth is afflicted by “sleep paralysis,” a condition whereby the mind is awake but the body cannot move. During such moments, Beth is visited by a floor-crawling “Old Hag,” a visitor with a penchant for strangling her victims.

At this point in my review for Dead Awake, I will place a nominal spoiler warning.

No one believes Beth. They figure her stories are the residue of a history of mental ill-health. Even Kate doubts Beth’s claims — until Beth is killed by her tormentor. At this point Kate makes the very horror movie decision to move in with her parents and sleep in the bed where her sister died. Of course, it’s not long before Kate suffers the curse. She confides in friends, as well as Beth’s boyfriend Evan (Jesse Bradford, “I Hope They Serve Beer in Hell”), and it’s clear that sleep paralysis is more common — and more deadly — than she ever imagined.

That’s a pretty good setup for a horror movie. After a strong opening — it’s relatively rare for everything to not be okay from the very beginning — we are presented with a simple conceit through which to terrorize the audience, and the opportunity for some distressing sleeplessness, naturally resulting in conflict and drama. Would that it were so simple.

Enter stage right Lori Petty (“Orange Is the New Black” TV series), who plays (with great verve) the stern Dr. Sykes, a sleep doctor with a determinedly scientific outlook. Enter stage left outlawed ex-doctor Hassan Davies (Jesse Borrego, “Colombiana”), struck off the register for his out-there New Age beliefs. He’s too unhinged too early to be untrustworthy. Henceforth Dead Awake is bogged down in a fairly uninteresting and frankly surplus conspiracy sub-plot (which also happens to betray a Scientology-level distrust of psychiatry). At bottom it’s a science versus religion thing.

The monster herself is your standard J-horror mangle of angled limbs and shaggy hair. (British viewers may find some amusement in that she resembles Zelda from the ‘80s TV show “Terrahawks”; and further laughs from the fact that Davies is associated with a sleep research organization called ASDA.) Moreover, the Old Hag is clearly a young woman (Natalie Jones, “Cut Her Out”) wearing prosthetics, and her powers are oddly limited.

In “A Nightmare on Elm Street,” the antagonist was legitimately menacing because his abilities were clear: if you met him in your dreams you would die. However, Dead Awake muddles its rules to the point where the tormented reality (i.e., strangulation) the sufferer experiences appears entirely differently to the serenity observed by onlookers. Which can only mean the sufferer is dreaming or they’ve entered another dimension — either way, it is not the sleep paralysis presented from the narrative’s outset.

Another confounding/needlessly convoluted factor is that the Old Hag apparently only exists if the individual “believes” in her, undermining the fear factor even further. If only we were shown what she’s really capable of. Alas, characters are bumped off with remarkable abandon without being given fun deaths — often their demise occurs off-screen.

On top of this is the inherently inert nature of sleep paralysis itself. A terrifying condition, no doubt; but director Phillip Guzman struggles to make us empathize with the powerlessness Kate is feeling. Perhaps it’s because of the excessive plotting that not enough time is spent on building tension, but Dead Awake is about as scary as a duckfeather pillow.

Thankfully, the performances are strong enough to hold the attention. Donahue (so great in Ti West’s “The House of the Devil”) convincingly portrays a sister steeled by grief, but who is also desperate and reeling. Bradford, channeling a younger Justin Theroux, at first delivers a convincing depiction of living with a mentally ill person, and later the reckless desolation in her wake. Petty, always welcome, is having a ball as Dr. Sykes, while Borrego swallows the scenery whole as her bighearted, raving opposite.

If only they weren’t working with bland direction and a merely functional script. Dead Awake has mediocre written all over it. As a horror flick it is decidedly not horrifying; as a mystery thriller it’s plodding; and as a study of a condition with the power to tap into our worst (waking) nightmares, it’s pretty laughable. Watch Rodney Ascher’s “The Nightmare” first — and then consider this, while preparing for disappointment. 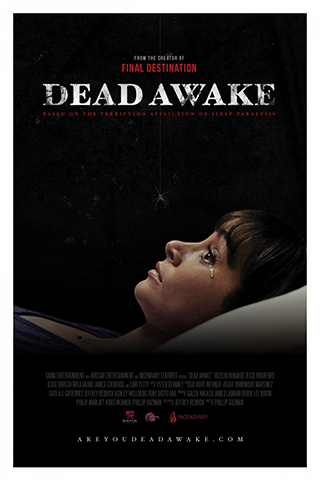