Many people can relate, and even confess, to being unmotivated in life. When ambition has disappeared and all our fears of rejection and failure become all too realistic, we retreat into what is comfortable. For once promising chef, twenty-something-year-old Charlie Brenner (spectacularly portrayed by Freddie Highmore, “The Art of Getting By”), this common feeling of self-doubt plagues his opportunity for greatness in exploding into the culinary world. Through this premise, creator Jake Goldberger skillfully matures the coming-of-age genre into a relatable piece with adult themes that elevates this seemingly sweet indie comedy, Almost Friends, into a poignant story of trying to navigate oneself when the biggest of roadblocks are present.

In the midst of his quarter life crisis — Charlie has a crush on a pretty girl who works at a local café. This said crush on high school student, Amber (aforementioned pretty girl, played by Odeya Rush, “The Giver”) is no secret among his inner circle of his two closest friends. The extroverted Ben (Haley Joel Osment, yes that kid from “The Sixth Sense”) encourages the bumbling Charlie to make progress on his juvenile crush nearly daily. Ben and Charlie’s friendship presents a fascinating comparison of personality; Ben has dreams and goals of moving to New York for college whilst Charlie revels in his undecided future. Charlie’s other friendship is quite refreshing: A 100% completely platonic friendship with Heather (Rita Volk, “The Hungover Games”) — another enabler for Charlie to come out of his introverted shell a little, who takes joy in teasing Charlie on his coffee girl crush. The trio go to not-so-terribly clichéd parties that seem a little more grown up that what audiences expect from movies centered on unrequited love. Sophisticated post school/work drinks at respectable rooftops or bars (as opposed to raucously wild house parties) are the perfect setting for Charlie to feel slightly charming.

Aside from his friendships, we get a glimpse into Charlie’s neat home life with his mother (Marg Helgenberger, “Mr. Brooks”) and stepdad along with his stepbrother. Playing the role of the goofy big brother and putting in the time as a devoted son, there are no flaws in his character — only comfort plagues his lifestyle. As his mother gushes about his once brilliant talent for cooking, his abandonment of his career and education sees him spending his days as an assistant manager at a revival movie theater. As if things in his personal life aren’t already a mess, the unwelcomed surprise of Charlie’s distant, unemployed hustling father (Christopher Meloni, “The Diary of a Teenage Girl”) triggers questions on where his life is going.

The pleasant irony of an estranged, unemployed father constantly needling his son on his ambitions actually saves the films’ otherwise tame progression. Christopher Meloni brings a mischievous spark and comedic relief in otherwise tense scenes, his sleazy attire and unspoken confidence after casually waltzing into his sons’ life after two years slathers another layer of mistrust for Charlie to carefully consider. Meloni and Helgenberger share similar careers in TV drama — raw emotion and authenticity in their regret and resentment is outstanding and boils right to the surface, erupting through the awkward barriers Highmore’s character can’t cross.

Almost Friends isn’t a dense, complex film though — the dialogue is thin, light and flows in accordance to the charming personalities of some of its major characters. Secrets are shed in between playful banter and sweet whispers that do become poignant for the audience to understand character motive and development. Although these stories kept in confidence don’t particularly truly deliver a gut wrenching, emotional blow — they’re designed to bring some depth into an otherwise fluffy narrative progression. By fluff, I refer to love triangles and the awkward tango of approaching a crush. However, it is to be commended that Goldberger gravitates away from the predicted formula that would follow Charlie and Amber’s friendship (this is an indie film after all). That said, neither aspect of their friendship or Charlie’s existential crisis is one dimensional — multiple view points are thrown for the audience to bare witness their reality.

Almost Friends may not be the most riveting story to come out of indie cinema, but the honest realism about friendship and uncertainty touches a nerve in the heart of a quaint New Orleans town and also that of this critic. 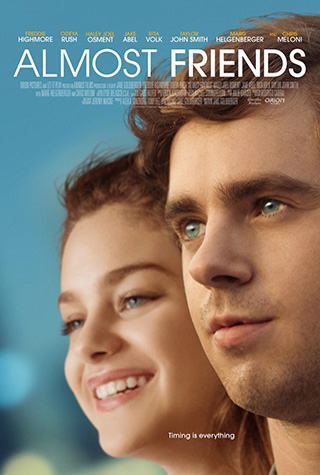