You know a movie, where the main plot line is skipping school, is bad when the main character tells the audience there are “rules” to such activities. And unless that character is Ferris Bueller, the viewers — for the most part — should just ignore those guidelines. I’ll even go a step further. The Art Of Getting By, the newest Fox Searchlight release wants to be a remake of the classic 1986 John Hughes comedy, “Ferris Bueller’s Day Off” so badly, all it’s missing is a love interest named Sloane. So, instead of paying good money to see this homage to clinical depression with a side order of a ridiculous teenage affair, save your money (and Ferris) and avoid this like the plague.

But, it is now 2011, so this version stars Freddie Highmore (“Charlie and the Chocolate Factory,” “Finding Neverland”) as George, a loner so depressing he makes Sylvia Plath look like Jerry Lewis. George has reached in senior year in high school without making a friend or doing any homework, whatsoever. He wears this non-achievement like a badge of honor, but no one really knows (or honestly cares) about whatever his motivation might be. He also tries to channel the spirit of Holden Caufield, but like his Ferris Beuller impersonation, it comes up woefully short.

Threatened by various teachers and counselors with expulsion or failure, he continues in his fatalistic endeavors. He tells one instructor who asks if he completed an assignment, “No, the whole thing seemed meaningless” (like this film). This inane comment somehow attracts the attention of Sally (Emma Roberts, “Scream 4,” “Nancy Drew”), one of the school’s more beautiful coeds.

She’s popular — but complicated, we’re led to believe — so it makes perfect sense that she would pursue this pathetic case. Of course, that’s reel life. In real life, George would begin a post-high school career of low-paying, dead end jobs on the road to an empty and unrewarding future. But seeing this interest, George’s brain cells finally wake up and he spends the better part of the rest of the movie trying to simultaneously repel and repulse her (it turns into “Ordinary People” at this point).

George does have a saving grace though — he doodles. Yes, and while many of them are run-of-the-mill drawings most of us do while on the telephone, his are major works of art (“George, this is who you are,” intones one of his few acquaintances). An art teacher also thinks he’s the next Picasso, and urges him to “find something to say.”

He doesn’t have much to say, however, and when he begins moving in Sally’s crowd, he goes from awkward and lonely to just being a jerk (evidently learning his socialization skills from Matt Damon in “Goodwill Hunting”). Complications arise when another artist, Dustin (Michael Angarano), begins to court Sally himself (since George seems to be waiting for the Apocalypse to make his move).

Under the watchful eye of Gavin Wiesen, making his directorial debut, the story meanders aimlessly, much like George does. One moment we’re supposed to feel deep sorrow and empathy over his situation, but the next were supposed to laugh at his travails. Which is it? As for this humbler scribbler, I was neither amused nor interested in his plight. There was no connection at all with his character, even though, at times, I was like George in some ways in high school — shy, a bit of a loner and artistically inclined. Yet despite this semblance, I saw this character more as annoying than anything I ever remembered.

Highmore does do the best he can with George, but the actor’s frail demeanor is soon overcome by the general lethargy of the character. Roberts is far too attractive and immature at this point in her career to pull off a complicated love interest. Coming from a series of weak and insignificant adolescent movies, she cannot play the lead this film so desperately needs.

The Art Of Getting By was praised at the recent Sundance Festival for exactly the same reasons it will most likely falter at the box office. Film festivals, by their very nature, are frequented by a younger demographic that wants their entertainment on the dark, morbid and often introspective side. Older audience members are not much inclined to watch two hours of a hapless loser being chased by a female who probably would not even look at him in the real world.

I don’t fault the film for this complete unreality; I fault it for the crime of over-angst, for making every utterance seem like it has much more import than it actually does, and not knowing what genre it wants to fit into. Perhaps, that was what Weisen wanted to achieve all along. Judging from the finished result, however, it’s really difficult to know. 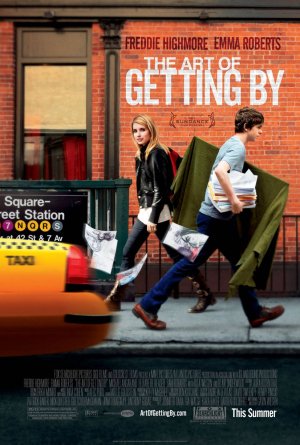