What a little gem of a film is Kiss Kiss Bang Bang. Many would put it in the often-mentioned “best films you’ve never seen” category, and I would not be one to argue. Shane Black sits in the director’s chair for the first (and to date, only) time and co-wrote the screenplay to this part murder-mystery, part comedy movie that is big on action, plot, one-liners and enthusiastic performances from all involved.

The plot of Kiss Kiss Bang Bang is relatively stock standard. It centers on three main characters, each sharing close-to-equal screen time: Harry, a small-time thief masquerading as an actor, Harmony, his love interest, and the cynical but equally hilarious Gay Perry, a shrewd private eye who comes to the assistance of the other two when they are implicated in a murder case. However, with all due respect to screenwriters Black and Brett Halliday (who wrote the novel the film is adapted from), the ins and outs of the plot, while being original enough on their own merits to remain extremely entertaining, inarguably take a back seat to the film’s near-perfect adherence to some of the more applicable conventions of noir filmmaking.

Released back in 2005, the film stars Robert Downey Jr. (“Sherlock Holmes”) during what were still the baby steps of his triumphant return to the movie industry. Downey Jr. not only delivers a creative performance abundant in expert comic delivery and noir voice (his cynical narration of a fancy LA party in the opening scene gives you a sense that you’re about to witness something special), but also one which couldn’t be further from his most famous role as Tony Stark. It’s the ease of which he can tackle these diametrically opposed roles that has placed him in the category of the most skilled modern day actors (while netting him an approximate seventy bajillion dollars in the process).

Michelle Monaghan (“The Heartbreak Kid”) is by no means weak as Harmony either, but she does get overshadowed by her two co-stars. In particular, the underrated Val Kilmer (“Bad Lieutenant: Port Of Call: New Orleans”) makes an excellent turn as the wisecracking Gay Perry, whose interplay with Downey Jr.’s Harry throughout the film never lets up on laughs or quality of dialogue. In fact, it is the extraordinarily unique screenplay that sets Kiss Kiss Bang Bang apart from what might have been just another poorly constructed buddy comedy. Showing occasional glimpses of scriptwriting talent in the “Lethal Weapon” series, Black has truly set himself a new benchmark here, with a tight script that compliments the rapid pace and noir cinematography of the film.

Oh, and as far as humor goes, there is also a heavy dose of both slapstick and farcical scenarios to make anybody laugh. And when coupled with the sharp wordplay, if it fails to make you burst out laughing (unlikely), it will certainly put a big smile on your face as you can’t help but appreciate how much effort actually went into creating the original jokes.

If I had to state one negative of Kiss Kiss Bang Bang, it is that the second act briefly gets too convoluted with the all-too-rapid introduction of secondary characters (some living, some dead), most of whom serve no other purpose than to act as red herrings, that, for the most part, fail to deceive the audience. That being said, this really is a minor gripe of mine and, since those tangent arcs are wrapped up logically by the film’s climax anyway (a staple of all good noir thrillers), it should by no means discourage you from immersing yourself in this expertly-crafted fairytale of sex and sin. 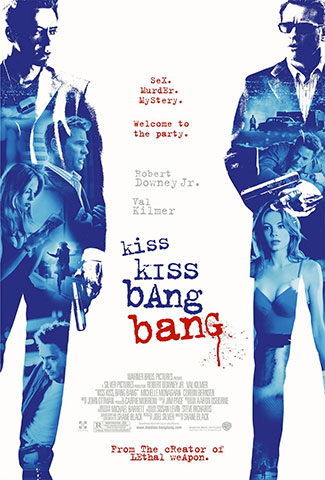