A progressive rage simmers at the despondent heart of Little Woods. It isn’t just that writer-director Nia DaCosta spends a busy 95 or so minutes examining how working-class economic anxiety often begets the toppling chain of dominoes in those trapped in it, but more so that she tells her story through the lens of a complex, dynamic relationship we surely don’t see enough of on-screen, and even less so in a movie of this kind.

Tessa Thompson (“Sorry to Bother You”) and Lily James (“Baby Driver”) play two sisters, Ollie and Deb, who at movie’s start could certainly be faring much better than they are. The former, in a way, is; Ollie is getting her life together after being caught smuggling drugs at the border (the U.S.-Canada border, that is). She’s only got a few days left on her parole. And while she’s looking to create change for herself via legal means, the daily grind is still unmitigatedly just that — a daily grind.

James’ Deb, on the other hand (the slightly more charismatic of the two actresses here) lives with her 5ish-year-old son in an abandoned trailer in an abandoned supermarket parking lot that reeks of the capitalistic fumes that have lingered long after wealth has left. Deb is also searching for change, and a confirmation that the individualistic path she’s chosen to take (the boy’s father is your typical movie drunkard who can barely muster the energy to help himself) will yield more than daily parking tickets and a scant pantry.

Opportunity appears quickly. But Little Woods is a different movie altogether if it even contemplates making upward mobility easy for its protagonists. Ollie and Deb are victims of their circumstances, not having anyone to rely on but each other — and even then they show reluctance. DaCosta is able to thread her story and its central dynamic with the deep-seated irony that despite being tangled in life’s thorny branches now, trying to claw their way out may only draw more blood.

It’s an ill-fitting situation in a community where ill-fitting parts are the norm, a place that’ll be more familiar to some while being mistaken for the stuff of dystopian fantasy to others. It could affect how the movie ultimately plays for you; we don’t ever really forget what left our scars.

DaCosta is keen on finding places for these sisters’ vulnerabilities to be exploited, though not in ways that are indulgent or gleefully haphazard as a male filmmaker might have been tempted to do. “Your choices are only as good as your options are,” Ollie says to Deb about midway through Little Woods, an indicator of the risks they’re willing to take to win at least some consistency in life, and eventually do take.

But the words are also a credo — a truth as raw as DaCosta’s employed style here — that feels both utterly feminist and also specific to the people Ollie and Deb are associated with, not many of them other women. There’s seemingly no way to sustain yourself in this version of America without taking a beating, and if you’re getting out bruise-free, you might be a criminal.

Far be it from this male writer to pretend like he has the perspective to know the struggles women face every day, but DaCosta seems to be equalizing the race-from-behind attitude that fuels motivations, situations and intuitions in Little Woods with feminine struggles that don’t discriminate on the basis of class or wealth. That’s not a lesson Hollywood usually teaches, which is to say it feels much more honest; an idea under-explored in cinema, if not completely new, and the latest example in an endless display of why the industry must work to give more opportunity and voice to women behind the camera.

Through all their trials and tribulations, even enduring the moments of manufactured tension, the evolving dynamic between Ollie and Deb remains central. This movie is one where exchanges are key and frequent — drugs for cash, confessions for apologies, misplaced trust for emancipation from the system — but the constant tests of resolve being ping-ponged between the central pair are what provides the most weight, even if they’re sometimes betrayed by a screenplay that can feel at odds with the urgency Little Woods impresses.

A moment of helplessness, for example, brings them closer early on. But it’s also helplessness that causes them to scream words of frustration at the other. What other direction would they hurl them in, after all? Their internal compasses point only at each other, with the magnetic pull of a world that’s content with dumping them into the chasm created between hugely widening tiers of opportunity. There’s a natural verve to Little Woods, and for the most part it feels that way through and through.

DaCosta doesn’t marshal her skills at providing guidance on the way things should be instead — making the attempt would detract enormously from this story’s bludgeoning exterior — a decision that feels of apiece with her sensibilities. And she doesn’t provide resolution to Ollie and Deb’s struggles, because even if the film were three hours long, those fights would continue long after the credits have rolled. Its final moments would feel hollow if it wasn’t particularly resonant with the timbre of universality that makes the movie more deserving to be taken seriously as a female-led drama than, say, the comparatively plain-faced “Ocean’s 8.”

Both are movies we expect men to be at the forefront of — “Ocean’s 8” via its franchise roots, Little Woods via its brooding mood — but only one is willing to reconcile the explicit with the implicit. DaCosta isn’t going to make the mistake of telling us movies shouldn’t. 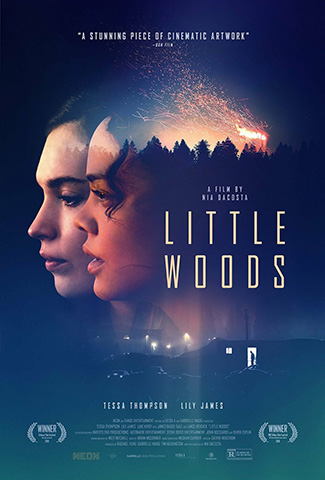