The basic premise of the movie: A family man takes his daughter from their city home where a tragedy had occurred, to a country cottage where all hell breaks loose.

Hide and Seek has a great cast so I expected good things. Robert DeNiro still has some acting left in him. Dakota Fanning is an accomplished child actor with a strong road ahead of her. Elisabeth Shue and Famke Janssen still both look damn good.

The movie starts off well with good character introductions and initial layout of the plot. Of course this plot has been played so many times there isn’t much originality left to it . . .

Anyways, the movie follows the typical ‘shock and awe’ campaign that other suspense movies take. A father trying to protect his child who is a frightened girl, an uninvited invisible friend — the movie takes us from one seemingly shocking moment to the next without any real bang. After the first instance, we get the idea that someone or something is writing on the walls and that they aren’t pleased with the current situation. Ho hum.

Now here is where the shit really hits the fan. The writers of Hide and Seek suddenly realized that they needed to come up with a tricky ending so they threw some shitty ideas against a wall and saw what stuck. The ending is so implausible and quite frankly stupid that I was physically angered. How do can they put out a promising movie and just hack the ending and expect the audience to be pleased about it? How fucking stupid does Hollywood think we are? Obviously, they think we’re all a bunch of assholes. That’s why they continually churn this crap out.

As stated above, Hide and Seek could have been good. Good cast and a good storyline (even if it has been done before). But the ending killed it. Totally fucked it. Don’t watch this movie unless you feel like wasting two hours of your life and $10. 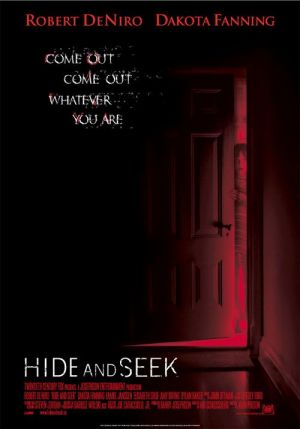