In a mission from which they have little chance of returning, a group of condemned prisoners elect to undertake a voyage to the deepest regions of outer space to attempt to harness the energy of a black hole and, as one of the convicts explains, turn their shame to glory. French director Claire Denis’ (“Let the Sunshine In”) first English-language film, High Life, is science-fiction minus the expected alien warlords, lightsaber battles, or dazzling special effects. The film, according to Denis, is not about conquest but about isolation and what it means to be human. It is a film that examines the limits of human behavior under extreme conditions. Much of it is not pretty.

Co-written by Denis, Jean-Pol Fargeau (“Bastards”) and Geoff Cox, and photographed by cinematographer Yorick Le Saux (“Personal Shopper”), the film takes place far outside the solar system, near the Milky Way. Unlike the compliant society of Aldous Huxley’s “Brave New World,” the travelers aboard the unnamed floating penal colony are untethered to any social norms, often aggressive, even brutal in fulfilling their immediate needs. Without a linear narrative, Denis keeps us guessing as to when events are taking place and is not in any hurry to connect the dots. In time, however, the experience becomes so immersive that it almost doesn’t matter.

High Life opens in a lush garden that might just as well be in your back yard as in the heavens. Here, fruits and vegetables grow alongside exotic plants, providing food and oxygen to the entombed crew. Though there is a row of hanging space suits in the ship’s rust-colored corridor, the only person we see is a man on the outside of the ship ostensibly replacing a part. Against this backdrop of infinite blackness, the cries of a baby are heard. The cry interrupts the man’s job and returns him to his immediate task of raising a child in space: Preparing baby food, teaching her to walk, letting her know with determination what the word “taboo” means, and informing her in no uncertain terms that her crying is “going to kill me.” The plea, however, falls on deaf ears.

In a film that has many disturbing images, the interaction between Monte (Robert Pattinson, “The Lost City of Z”) and his infant daughter Willow (Scarlett Lindsay) evokes an exquisite tenderness. In spite of the unrevealed crimes that have brought him to this point, the emotional strength displayed in Pattinson’s striking performance is the only anchor we have to hold onto. Even on a voyage to nowhere where solitude threatens to overwhelm, the expression of his love for the child — how he holds her, looks at her, and comforts her is deeply moving. Denis explains, “His (Monte’s) friends are dead and his life no longer has any meaning. But the baby forces him not to commit suicide. In a way, she obliges him to become a man again — to share and communicate.”

Each day Monte sends a status report, asking for and receiving another twenty-four-hour grant of life support — from whom or what is not clear. In flashback, we see the other passengers of the spaceship, now long gone and much of the film describes their interaction. Among the women are Doctor Dibs (Juliette Binoche, “Ghost in the Shell”), Boyse (Mia Goth, “Suspiria”), Nansen (Agata Buzek, “The Innocents”). The men consist of Chandra (Lars Eidinger, “Clouds of Sils Maria”), the mission’s captain, Tcherny (André Benjamin, “Semi-Pro”), who takes care of the greenhouse, and the slightly unhinged Ettore (Ewan Mitchell, “The Last Kingdom” TV series) who meets a gruesome fate. Though how each one of them meets their fate is not spelled out, there is a memorable scene where the cryogenically frozen remains of others are thrown off the ship, dangling in space until resuming their voyage to eternity.

Dibs is a scientist who fits the stereotype of the “mad scientist.” In Binoche’s recreation, Dibs is a woman of enormous energy with big ideas. Though sex is forbidden on board, the spaceship has a room called “the F-Box,” which contains what can only be described as a sex machine and the film offers a lengthy sequence of the naked Dibs writhing in pleasure and pain with the help of a silver dildo. Trying to escape her criminal past, she believes that it is her mission to create babies in space, albeit the perfect child, as penance for her crimes. As each male crew member donates his sperm, the women on board are impregnated, but the babies are immediately taken away before they can be nursed.

The resulting scientific data about being born in space are relayed back to Earth, but to what end is uncertain. The only resistant one is Monte. Selflessly guarding his privacy, his sperm is extracted by Dibs when he is sleeping and planted in Boyse, the most rebellious of the crew. On the surface, High Life is barely a cut above despair, yet underneath a heart is beating. Though Monte is the one person who avoids connection, he is the only one left on board with someone to care for, an infant who depends on him for survival, requiring him to transcend his emotional deadness and discover hidden reservoirs of compassion.

As the ship approaches a black hole and the texture mysteriously changes from black and white to color, Monte asks his now teenage daughter Willow (Jessie Ross, “The Frankenstein Chronicles” TV series) the enigmatic question, “Shall we?” Like the wild dance of Galoup in Denis’ “Beau Travail” which seems to exist outside of space and time, the question “Shall we?” evokes the dance of love, inseparable and timeless. In the poet Rumi’s phrase, “All that is profane becomes sacred again.” 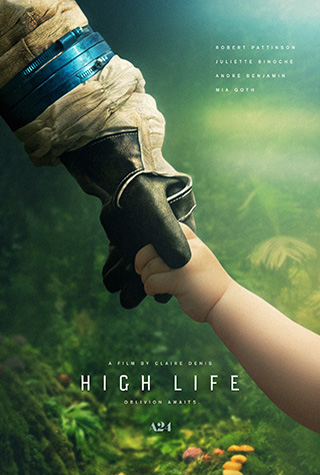