Isabelle (Juliette Binoche, “Ghost in the Shell”), a divorced fiftyish artist, is attractive, urbane, and highly intelligent but her relationships seem to have a built-in mechanism for self destruction. The men in Isabelle’s life offer her little except temporary physical pleasure and are pretty much ciphers (and not very nice ones at that). Loosely based on Roland Barthes’ book “A Lover’s Discourse: Fragments” with a screenplay by Christine Angot, Claire Denis’ (“Bastards”) sophisticated comedy/drama Let the Sunshine In (Un beau soleil intérieur) is lighter fare than normal for Denis, but it has its probing, self-reflective moments as well and Juliet Binoche, as usual, is an appealing screen presence.

Isabelle wants to find someone who fits her pictures but, as most of us discover sooner or later, life often does not fit our pictures. All of her relationships start out to be very promising, but eventually the decisions she makes about her partners seem to get in the way of her satisfaction. Whatever she thinks that she is looking for, she does not find it with either banker Vincent (Xavier Beauvois, “Farewell, My Queen”), actor (Nicolas Duvauchelle, “Wedding Unplanned”), ex-husband François (Laurent Grévill, “A Perfect Man”), or any other potential beau for that matter. The film begins with Isabelle in bed with the married, pretentious Vincent. Things are looking a-okay until she decides that he is taking too long to climax, a fact she decides reflects badly on her.

Vincent asks her whether she has had more success with other lovers, but her response is a convincing slap in the face. She is with him when he bullies a bartender, but she does not react. The next time he visits her in her apartment, however, she calls him an unrepeatable name, then tells him to leave and not come back. Instead, she hooks up with a young actor (Nicolas Duvauchelle, “The Well-Digger’s Daughter”) who is also married, (though with a better disposition). When she invites him in for a drink, they play endless games about whether he should stay or leave. When he decides to stay, they go through the motions together, but by the next morning he concludes that things were better before they had sex and wishes that it had not happened.

The next one up is François (Grévill), who is concerned about their ten-year-old daughter after she tells him that her mother cries every night. This is not good news for Isabelle to hear and she uses it as a reason to end any chance for reconciliation. There are several more suitors that follow, but Isabelle always finds something about them that she dislikes. She meets Sylvain (Paul Blain, “All is Forgiven”) at a club and he literally sweeps her away with pleasure as they dance to Etta James’ beautiful “At Last.” Unfortunately, Fabrice (Bruno Podalydès, “Chocolat”), an art gallery owner, convinces her that Sylvain is wrong for her because he is not a good fit for her circle. This provides cover for her to end yet another relationship, one that had barely even begun.

There is not much left for her of course but to go to a clairvoyant (Gérard Depardieu, “My Afternoons with Margueritte”), but his banter provides little certainty that she will find “the one.” There are times in Let the Sunshine In when Isabelle has moments of happiness and optimism, but she can also come across as needy and, at times, almost desperate. Nonetheless, through the magic of Binoche’s performance, she is a sympathetic figure and one that we root for. Her quest, however, has a touch of game playing to it and it seems that, for Isabelle, it may not be whether you win or lose but how you play the game. 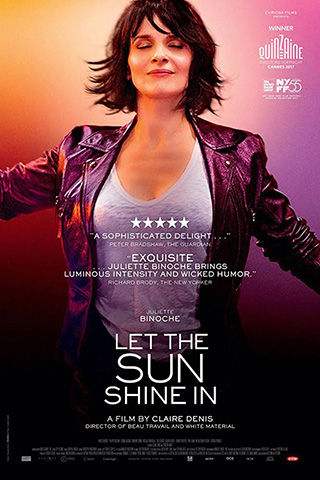