When 38-year-old Fred Flarsky (Seth Rogen, “The Disaster Artist”), a sloppy and unkempt-looking journalist, falls for Charlotte Field (Charlize Theron, “Tully”), a highly sophisticated, intelligent, and political savvy politician, we know that we must be in fantasyland or in a Jonathan Levine (“The Night Before”) comedy. While Levine’s Long Shot challenges believability, there are enough plausible moments to keep us entertained, however, depending of course on our tolerance for specific raunchiness and general run-of-the-mill grossness. Written by Dan Sterling (“The Sarah Silverman Program” TV series) and Liz Hannah (“The Post”), in the film’s opening, the bearded liberal Flarsky does his best Black Klansman imitation by posing as a skinhead at a meeting of the “White Nation.”

Flarsky bellows “F-the Jews” in the most unconvincing fashion, but before he can say “Sieg Heil” and have a swastika tattooed on his arm, he is unmasked as a Jew and dives for the nearest exit which he discovers at the bottom of a flight of stairs. Expecting to be received as a hero by his publication, “The Brooklyn Advocate,” Flarsky is told that the paper has been sold to a right-wing media conglomerate whose CEO Parker Wembley (Andy Serkis, “Black Panther”) bears more than a slight resemblance to Rupert Murdoch. Rather than waiting around to be fired, Flarsky quits his job and is consoled by Lance (O’Shea Jackson Jr., “Straight Outta Compton”), an old friend from college who attempts to raise his spirits by taking him to a World Wildlife Fund dance party where Boyz II Men are performing.

At the party, Flarsky spots Charlotte Field (Theron), the glamorous woman he remembers as being the babysitter he had a crush on when he was thirteen years old. It turns out that Field is now the U.S. Secretary of State who has just decided to run for U.S. President in 2020 (she must have thought that there weren’t enough candidates). Her opportunity presented itself when President Chambers (Bob Odenkirk, “Nebraska”), her Trumpsky-like boss who was a former TV star, decided to pack it all in and return to the more culturally appreciated role of being a film star.

To its credit, Levine shows us how Field has to be almost perfect in every aspect if she is going to defeat a strong male candidate. Focusing on the image women are compelled to present to the public, Field hires Flarsky as her speechwriter on the advice of Katherine (Lisa Kudrow, “Neighbors”), her image consultant, in order to add some humor to her too-serious persona. Before you can say “Flarsky and Hutch,” the two are off on a whirlwind tour around the world to promote her environmental initiative, (the “seas, bees and trees” project) which she wants to have 100 countries sign onto, though details of the initiative are blowin’ in the windmill.

Visiting Hanoi (“Sorry for what we did to your country,” Flarsky tells them), Buenos Aires, and Stockholm where her trusted advisers Maggie and Tom (June Diane Raphael, “Blockers”) and Ravi Patel, “The Black String”) dress Fred up in a traditional Scandinavian get-up that looks slightly ridiculous. In spite of the best efforts of her staff to prevent it, however, the professional relationship between the unlikely pair inevitably morphs into something more, something that those familiar with Hollywood romantic-comedies will have no trouble predicting. Though Field has to fend off romantic overtures from the charming, but superficial, Canadian Prime Minister James Steward (Alexander Skarsgård, “The Legend of Tarzan”) (Justin Trudeau should sue), it seems like no one can compete with Flarsky for her affection.

While they are not exactly the lovable next-door neighbor types, their relationship does have chemistry and we root for them to rise above the material the script saddles them with. Things get really dicey, however, when the Secretary conducts important State business during a drug-induced high, a scene that most definitely will appeal to parents trying to prevent their offspring from using drugs. Thanks to the magic of the movies, however, everything just seems to fall into place for the odd couple who even shrug off the effects of an embarrassing video that surfaces during the campaign of Flarsky performing solo.

While the relationship between candidate and speechwriter is often tender, especially a scene in which Flarsky sheds a tear while both are observing the Northern Lights, these moments are unfortunately buried under a ton of F-words and more than a few crass and offensive scenes. With everything going on in our political life today, a relevant satire would have been most welcome. Unfortunately, Long Shot only comes close a few times to scoring any significant satirical points. While its spoof of Fox News hits the target, most of the humor feels like it was written by a horny pre-adolescent. Satire can be powerful when it has wit and intelligence. While the film does flirt with a contemporary edginess, it lacks a coherent message and ends up being “all things to all men (and women).” 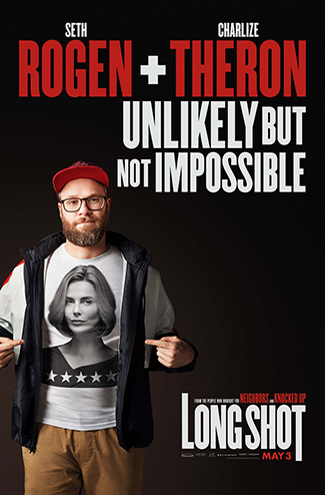