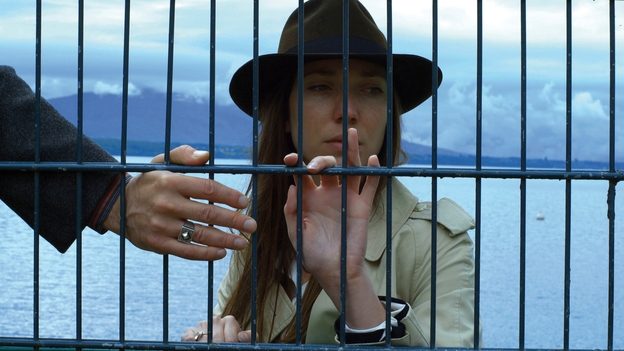 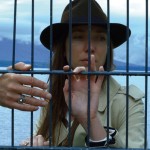 The modern explosion of stereoscopic 3D cinema has been many things in many different filmmakers’ hands, but it’s never quite been whatever it is that French New Wave pioneer and long-time experimenter Jean-Luc Godard has done with it. Whereas before the technology ranged from irrelevant to immersive, Godard has now brought it to a place that exists between tremendously transformative and deliciously demented. In Godard’s clutches, 3D is more weapon than tool.

He slices and dices, stabs and jabs, as he creatively carves out a new corner of filmic expression in his latest feature, the triumphantly revolutionary gonzo trip Goodbye to Language. At times, the third dimension is used as no less than an assault on our eyes in what occasionally feels like a purposeful prodding of the general complaint that 3D movies can cause ocular strain and motion sickness. It’s as bratty as anything the much younger version of Godard pulled off in his 60s run of French New Wave works.

Except that within this playful joking and goading exists the mind of an artist that feels vitally committed to exploration, to running free in the spaces of imagination that cameras and cuts rarely visit. Combining scenes of a couple constantly embroiled in philosophical discussions (often while nude), clips of pre-existing movies, and grainy footage of a friendly dog wandering around a curiously colored forest may sound like the makings of a mess, but Godard spins it all into a gloriously invigorating slap across the face, a collective call to wake up and rejoice at what cinema can do.

Drunk on that elusive elixir of spontaneity and immediacy, Goodbye to Language appears to exist outside of the usual three-part production process, as if instead of being made, it’s simply being before our very eyes, spilling out of Godard’s brain in a constant stream. It’s hard to keep up with it all at times, but that only makes the whole endeavor seem worthy of revisiting because the experience just rolls over us in such a memorably mesmerizing way.

Part of the charm of Godard’s wonderful wizardry is that he can hurl so much at the audience without alienating us, though it must be said that there are probably many who feel differently about that lack of alienation. But once you’re on Godard’s wavelength, you’re there to stay, pulled along by the force of his creative powers and the gutsy gusto of his style. And if you’re not on that wavelength, well, it’s at least tough to deny that a lot of stuff is being hurled.

Looking for absolutely any and every way to employ the 3D technology, Godard achieves some fascinating effects. Nearly all other modern 3D movies seem plain and generic alongside this attack from the third dimension. It’s not an eye-friendly experience all the time, but it is an instantly unforgettable one, a delirious contortion of the visual plane that sends a dog’s tail whipping almost violently at our eyeballs one moment and then smacks us with a simple shot that’s been offset just enough to make us awkwardly see double. 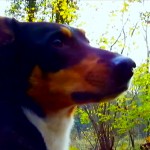 Godard’s greatest trick comes when he actually sends two separate shots of the same scene through the dual projection system at the same time so that our left eye sees one part of the scene and our right eye sees an entirely different part. The combined result of this effect is torture for our eyes, since the blending of the dual images responsible for the 3D appearance marks a brutal collision of the separate frames, but watching the scene unfold one eye at a time and having the choice of which shot to view is an absolutely thrilling bit of interactive innovation. It’s one of those rare instances where I can truly say that I’ve never seen anything like it.

The rambunctious playfulness doesn’t stop at the images, either. The movie’s soundscape makes for an unhinged aural experience, with music swelling up only to be severed mid-note. Moments of silence are shattered as quickly and unforeseeably as loud moments are silenced. This approach should produce something of a catastrophe, but Godard is such a gleeful tinkerer that it feels more comically charming than needlessly messy. And the filmmaker remains ever a master of matching his stylized warping of picture and sound so that the two pieces move in tandem, dancing to the same rhythm, as cryptic and strange as that rhythm may be.

There’s nothing quite like what Godard is up to here. It’s as though he has not only rewritten the rules on how to make a 3D movie or how to view a 3D movie, but even how to be a 3D movie. Then again, perhaps even that is misleading. He hasn’t so much rewritten the rules as tossed the rule book away with Goodbye to Language. There’s a starling newness to this work that feels effortlessly overwhelming and definitively, unshakably unique. Goodbye structure, convention, formula, predictability, visual consistency, comfort, safeness, and simplicity. Welcome to the other side, a peek behind the curtain and a long look at the wild world beyond the infinite, where madness and genius lie, where eyes watch in awe as the screen and our perception of it disappear.

'Movie Review: Goodbye to Language (2014)' has no comments 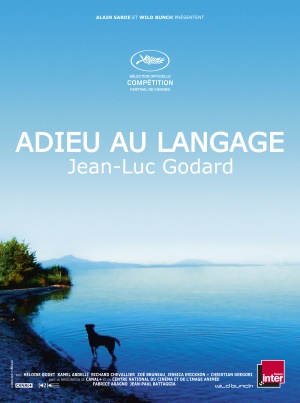