If The Post was little more than a piece of agitprop beating the drums for the value of a free press in a democracy, it would more than justify its reason for being. The fact that it is so much more is a testament to the skills of director Steven Spielberg and the talents of Meryl Streep (“Florence Foster Jenkins”) and Tom Hanks (“Sully”), working together for the first time. Written by Liz Hannah and Josh Singer (“Spotlight”) and based on The Washington Post Publisher Katharine “Kay” Graham’s memoir “Personal History” which won the Pulitzer Prize in 1998, the film dramatizes the struggle within the newspaper over whether or not to publish the highly controversial Pentagon Papers in June, 1971 and it is an engaging and often exciting look.

An explosive political statement that rocked the country with its revelations of how successive administrations, both Democratic and Republican, had lied to the American people about the nature of our commitment in Vietnam, the Pentagon Papers were first leaked to The New York Times reporter Neil Sheehan (Justin Swain, “Luke Cage” TV series) by Defense Department analyst Daniel Ellsberg (Matthew Rhys, “Burnt”) after hearing Defense Secretary Robert McNamara (Bruce Greenwood, “Kingsman: The Golden Circle”) say privately that the war was going badly, and then minutes later tell reporters that it was going splendidly.

The study was designed to be a chronicle of American involvement in Vietnam from 1945 to 1966 for the benefit of future generations of scholars but, as the reporters discovered, the 47-volume document containing 7,000 pages showed how the government misled the people into thinking that Vietnam was a winnable war while privately conceding that it was not. The document also claimed that while the U.S. was pursuing peace talks, the military and the intelligence agencies were covertly expanding the war. Acting on the premise that The New York Times was in violation of the Espionage Act, however, Attorney General John Mitchell obtains a court order preventing the paper from any further publication of the document, an event that provides an opening for The Washington Post to become a bigger player in the world of journalism.

On the direction of executive editor Ben Bradlee (Hanks) and publisher Graham (Streep), the paper’s national editor Ben Bagdikian (Bob Odenkirk, “The Disaster Artist”) obtains 4,400 photocopied pages of the document from Ellsberg, his friend from the days at the RAND Corporation. It was the same Bagdikian that years later Graham called an “ignorant, biased fool” in response to his criticism of exorbitant administrative salaries at the newspaper (not mentioned in the film). The decision of whether or not to publish, however, forms the centerpiece of The Post and it involves a furious debate that includes the newspaper’s lawyers, bankers, and would-be investors.

The first female CEO of a Fortune 500 Club, Graham was a former socialite who inherited The Washington Post after her husband’s death, but had to earn respect in the atmosphere of a “good ol’ boys” club where women were either objectified or invisible. Since she launched a public stock offering worth millions, she now has to weigh the paper’s right to keep the public informed with the possibility of investor’s pulling out and even a potential jail sentence for herself and Bradlee. Though Bradlee argues: “The only way to assert the right to publish is to publish,” and proclaims, “We have to be the check on their power. If we don’t hold them accountable, who will?” Nonetheless, he is conflicted on whether to publish in this instance and the final decision has to be made by Kay. Ultimately the U.S. Supreme Court would decide the issue, a decision that is the dramatic highlight of the film.

Unlike “All the President’s Men,” where the only women in the newsroom are secretaries and reporters, The Post makes Graham’s contribution visible even as it avoids anything negative in her story, such as her anti-union stance during the Pressman’s Union strike of 1975. The film, to its credit, does point out that Bradlee and Graham both had cozy relationships with high-level politicians, relationships that would not be acceptable today. Kay, however, reminds McNamara that her son fought in Vietnam and that she owes it to him and others who fought and died there to expose the government’s lies about the war.

Perhaps the best tribute to Katherine Graham came from her son, Donald E. Graham, who later became chief executive, “She stood up,” he said, “against people who literally thought they could push her around.” Streep’s Graham is a bit unsteady at the beginning but full of gathering resolve and, when she decides to publish against the wishes of some of the prominent men on the Board, it is as if we are all saying, “Let’s go, let’s go, let’s publish.” 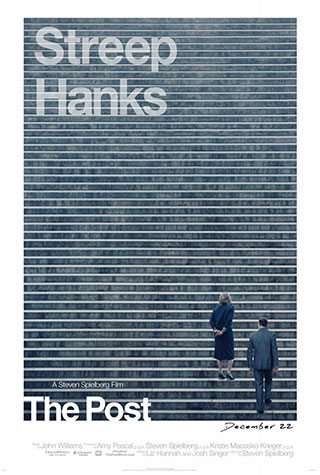