Time Share (Tiempo Compartido) is set in an oppressive, claustrophobic time share community called Vistamar, a vacation spot owned and operated by Everfields International. The latter is a phantom company purportedly headquartered in Tucson, Arizona, perhaps a nod to the very American-style promise of fun and restoration that the community promises its guests. However, the ownership, function, and purpose of the resort are never clearly revealed except through suggestion and innuendo. Time Share is a Spanish-Language film, a Mexican/Dutch venture, and the second feature film created by Piano, a company headed by Sebastian Hofmann and Julio Chavezmontes. The pair also serves as co-screenwriters (Hoffman directs) of this eerie, ominous, and darkly comedic drama (more dark than comic).

Pedro Alvarez, the protagonist, is stolidly and intensely played by the Mexican actor Luis Gerardo Méndez (a far cry from his comedic role in the TV series “Club of Crows”). Alvarez spends much of his time frustrated in his attempt to shed light on the peculiar goings-on at the resort. The first clue that Alvarez finds that things are amiss in Vistamar occurs when he discovers he and his family must “share” their week-long time share suite with another family. Alvarez gets the runaround from resort staff, and isn’t given a satisfactory answer to the overbooking. But since Eva (Cassandra Ciangherotti, “The Similars”), his wife and Alvarez’s son seem to get along with the family with whom they share the space, and enjoy the resort’s questionable amenities, Alvarez is left in a quandary. Is he the crazy one or is it all the others who are being craftily manipulated?

The film proceeds in a menacing, mysterious way as the resort staff insist guests are being treated to an optimal experience in line with the company’s philosophy that “there is no room for unhappiness.” However, there is an authoritarian aura to this Disneyworld-styled resort. RJ Mitte, who played Walter White’s son in the TV series “Breaking Bad,” is an interesting choice as Tom, the shadowy manager, who seems to be an expert at finding ways to make the guests and staff stick with the Vistamar program.

Balancing the major plot line involving Alvarez is a subplot that focuses on Andres (Miguel Rodarte, “Saving Private Perez”), a former entertainer, who is now reduced to working as a resort custodian, while his wife Gloria is assigned to promotional duties. What do Vistamar and Everfields International “have” on Andres that force him and his wife to serve in these capacities? It is not made clear, but it appears as though they have been promised a means of resolving a family tragedy by doing a form of corporate penance. But when Andres tells his boss he wants to climb the corporate ladder, he is told that the alternatives he faces are to be “a waste or to be spared.”

The intricate, Kafkaesque plot of Time Share, whose protagonists are kept in a bewildering limbo much like Josef K in “The Trial,” is supported by stark, yet elegant cinematography that creates a slow boil effect by using lengthy, sluggish traveling shots of empty corridors and spaces. Equally impressive is the art direction, which contributes to the oppressive atmosphere, exploiting washed-out pastel colors and generic, sparse living quarters. The result is that these cinematic elements deftly create a mood that is at odds with the purported upbeat, optimistic experience the guests are promised. Rather, they assist in amplifying the discomfort of both Alvarez and Andres in their attempts to understand the workings of a resort that seems to increasingly resemble an authoritarian society (you must be happy and if you’re not, you’re defective).

It is often difficult for a film to sustain a viewer’s interest where its main characters are stuck in a world that seems so enigmatic and incomprehensible. However, through an ingenious blend of a powerful, understated script, fine acting, spot-on camera work and scenic design, the film succeeds where a lesser work might simply dissipate into monotony. Time Share is a fascinating, thought-provoking work that can be appreciated on the level of intense, low-key storytelling and in its complex, elusive, and conversation-provoking themes.

It’s definitely one not to miss. 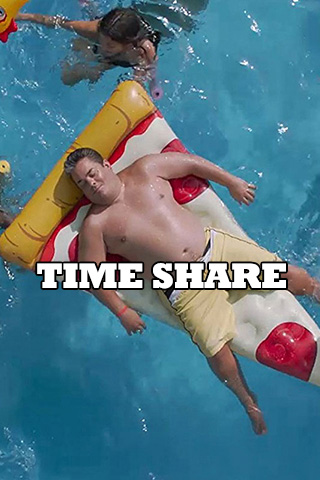