The Greatest Showman is a confusing animal. Its opening frames begin the movie by displaying the familiar and orchestral 20th Century Fox logo used from the 50s through the 80s, implying the audience is in for a reverent throwback to the classic Hollywood musicals of yore. Then — literally six seconds later — the studio’s modernized logo pops up accompanied by a jarringly loud pop song from the film’s soundtrack. Aside from a few opening credits presented in the style of silent film dialog cards, this is the last time The Greatest Showman ever feels like an homage, as it spends the next 104 minutes never completely committing to any of the ideas or themes it sets up.

While previous productions across multiple mediums have explored the life of famous entrepreneur P.T. Barnum in greater detail, The Greatest Showman offers a simplified retelling of the entertainer’s beginnings through a fluffy musical romp oriented towards families and children. In lieu of the darker points in Barnum’s story, we’re treated to eleven anachronistic, yet surprisingly fun tunes written by “La La Land” lyricists Benj Pasek and Justin Paul. From the loud and bombastic “Come Alive,” to the heartbreaking emotion behind “Never Enough,” and finishing off with the refreshing acoustic melody in “From Now On,” every song is both competently written and arranged in a catchy manner. While not every song has a corresponding dance number, the choreography for those that exist is filmed with seemingly expert skill by first-time director Michael Gracey, effortlessly flaunting his eye for spectacle.

As expected, Hugh Jackman (“Les Misérables”) brings his A-game to the lead role of P.T. Barnum. Fearlessly hitting powerful crescendos, he looks to be having the time of his life performing each and every number. Complementing his arc is his childhood sweetheart-turned-wife Charity (Michelle Williams, “All the Money in the World”). While she only gets to sing in two of the numbers, she manages to bring both a cheery and tragic weight to them, elevating a particular solo number from being somewhat forgettable to hugely empathetic. Outside of the musical numbers, Jackman and Williams share a charming romance for about twenty minutes, after which their romance disappointingly tackles the predictable trappings of the “father who’s too busy for his family” cliché.

Sadly, the supporting cast gets the short end of the stick here. Zac Efron (“Baywatch”) portrays businessman Philip Carlyle, while Zendaya (“Spider-Man: Homecoming”) portrays trapeze artist Anne Wheeler. They both own their scenes when given the reins to do so (particularly Zendaya performing all of her practical trapeze stunts), but their characterization is paper-thin. Carlyle is supposedly sacrificing a lavish, wealthy lifestyle by associating with Barnum’s show and becoming romantically involved with Anne, but we neither see this supposed lifestyle nor is it fully established what Carlyle’s initial reasoning is to escape it. Furthermore, while the majority of the circus performers get multiple sequences to dance and sing, they are all (Anne included) virtually shoved to the wayside unless they get to belt a number. The Greatest Showman is about Barnum more than anyone else, and this is especially troubling as the headlining number “This Is Me” essentially confirms the message of the movie is about inclusivity and owning up to your identity. Yet the “runaways” that are “running the night” are relegated to serving as a backdrop for Barnum’s journey, which in and of itself is still an oversimplified portrait of a very complex figure.

Another very unclear aspect of the movie is the level of deceit behind Barnum’s business. An entertainment critic (Paul Sparks, “Midnight Special”) spends his screen time repeatedly condemning the circus as “fake” with Barnum at one point acknowledging that his audience enjoys being “hoodwinked,” yet the movie portrays the circus folk’s oddities as completely genuine. The bearded lady is actually bearded, the dog man is disgustingly hairy, and the tallest man in the world is really, really tall. At its worst, Barnum’s deception appears to be nothing more than giving a character a stage name or slightly exaggerating an obese man’s weight. The flaws in Barnam’s character as a businessman are mostly addressed in momentary instances, and they’re too slight to ever make an impact.

So what’s really being said here? Is this the film’s way of commenting on show business in the modern day, such as the effect films like The Greatest Showman have on audiences despite being completely manufactured? We see a plethora of digital enhancements throughout the circus sequences, and although they are never distracting enough to take you completely out of the moment, they undercut one of the most unique qualities about enjoying a circus — the fact that every stunt is both real and performed live right in front of you. Granted, there are several moments of acrobatics that are impressive (most of them in the background), but the preference for digital-over-practical effects leaves a lot to be desired when it comes to the wonder factor.

However, despite the movie’s constant shortcomings, there is a very good chance you will still exit the movie smiling. To the over-analytic demographics, this movie will likely not meet your standards. In fact, the worst expectation to have walking in is that of a historically-accurate biopic — it’s anything but. There’s a humble and earnest quality to it that remains present throughout, and with Jackman’s charismatic performance leading the charge and backed up by a soundtrack worth looping on repeat for hours, The Greatest Showman might not be the greatest show, but it’s certainly one that should be given a look.

'Movie Review: The Greatest Showman (2017)' has no comments 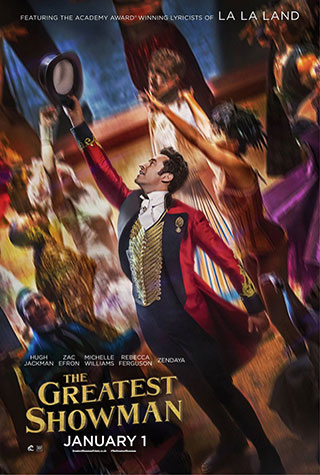