It should surprise no one: Daniel Day-Lewis shines in Paul Thomas Anderson’s bold and elemental romantic drama, Phantom Thread. The 60-year-old, who’s pledged to leave the silver screen, provides a well-sewn performance in this sendoff. And Anderson, an auteur by nearly any standard, dazzles again with masterful scenery, elegant costumes and a deeper look into the idiosyncrasies of love.

The buzzworthy film is a master class in drama, with a meticulous touch from Day-Lewis, a known method actor who reportedly apprenticed with the costume director of the New York City Ballet to prepare for his bow as fashion designer Reynolds Woodcock. Day-Lewis’ performance is so methodical and immersive, one has trouble actually imagining his long list of other equally impressive roles — as Abraham Lincoln in Steven Spielberg’s “Lincoln,” Nathaniel Poe in Michael Mann’s “The Last of the Mohicans” or Bill Cutting in Martin Scorsese’s “Gangs of New York.” His Reynolds, maniacal and masochistic as he may be, is a joy to witness — if only for the way he consumes the screen.

Despite the usual praise for Day-Lewis, Phantom Thread is equally carried by Luxembourgian actress Vicky Krieps (“The Young Karl Marx”), whom Anderson reportedly spotted after her role in the German black comedy “The Chambermaid.” Krieps, who plays Day-Lewis’ youthful, exuberant and determined muse and love interest, both matches Day-Lewis’ zeal and shines in lavish 1950s designs. Krieps is remarkably well cast, and does not pull any punches alongside the Oscar king.

The 1950s couture case study — reportedly inspired by the life of Cristóbal Balenciaga, a 20th century Spanish designer with equally uncompromising standards — begins by highlighting Reynolds’ shallow personal life and rigid schedule designing pieces for European high society. Seeking reprieve at his country manor, Day-Lewis’ Reynolds happens upon Alma (Krieps) at a small coastal restaurant. She quickly gets pulled into Reynolds’ lavish city lifestyle as both a love interest and muse, albeit it at a safe emotional distance from the designer, who has a way of discarding his younger girlfriends.

With the help of his sister, Cyril (Lesley Manville, “Maleficent”), Reynolds presides over an extremely formal and successful fashion house. When Alma is introduced to the lifestyle, she quickly begins chipping away at the designer’s once-corrosive soul. This is not a welcomed change for the designer, who pushes the younger Alma away at any chance. But the film is triumphant in fostering Alma’s personal growth — she not only outshines Reynolds, but also challenges him to think about his life and future.

In one masterfully poetic scene, the two engage in a verbal shouting match over butter on asparagus. In another scene, the toast-buttering love interest aggravates the designer with her simple use of a utensil. Nonetheless, the unconventional love trudges onward.

Phantom Thread is a slow-burner, but its many garments are tidily buttoned up by the final act, as Anderson boasts elements of romance, drama and thriller. Throughout the course of the 130-minute film, there is also very overt humor — something that does not bruise the narrative nor take away from Reynolds’ borderline sociopathic tendencies.

Anderson, who also directed Day-Lewis in the acclaimed western “There Will Be Blood,” knows how to position his leading actor, as he shuffles him through rooms of their city home and through bouts of illness and fatigue. His frames shine with coastal beauty and cultured outings. But perhaps the strongest attribute is Anderson’s ability to, once again, veer away from romance tropes, set ambiance aside and shed light on the inner-workings of an unstable but forceful relationship. The dynamic is both rich and tough to turn away from.

And just when it appears the film has offered up everything it possibly can, Anderson pulls back the curtain on another neat facet of Reynolds’ round-the-clock work habits or his relationship with Alma. The wholly original Phantom Thread will no doubt become a classic of its genre, much the way “There Will Be Blood” has since been revered. Although the film is Day-Lewis’ final go-around (supposedly), it has enough staying power, like his previous films, to admire decades in the future. 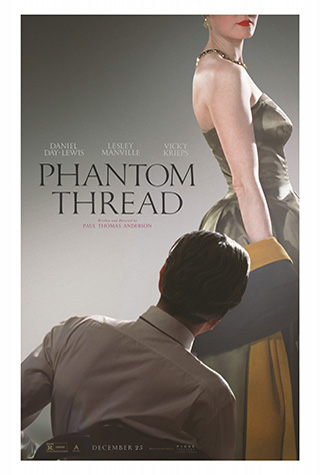