Directed by Lee Unkrich (“Toy Story 3”) and Adrian Molina, Coco, the latest animated film from Disney-Pixar tells us to follow our dreams, seize the moment, and regard our family as paramount. These ideals can often be mutually exclusive, however, as 12-year-old Miguel Rivera (voiced by Anthony Gonzalez) discovers. Miguel, who lives in the village of Santa Cecilia in Mexico, wants nothing else than to be a musician but his father (voiced by Jaime Camil, “Jane the Virgin” TV series) tells him that his family is one of shoemakers and that he must follow the tradition.

The family’s antagonism toward music began years earlier when the husband of Miguel’s great-great grandmother Imelda (voiced by Alanna Ubach, “Helen Keller vs. Nightwolves”) left the family to pursue his music career, a decision for which he has never been forgiven. Coco is set during the Mexican holiday known as Dia de Los Muertos (Day of the Dead), a celebration in which families pay respect to their deceased ancestors. In Miguel’s home, pictures of three generations of ancestors are placed on a ritual altar known as the ofrenda, though the top photograph is torn where the musician ancestor would have been.

Miguel’s idol is the singer Ernesto de la Cruz (voiced by Benjamin Bratt, “The Infiltrator”) whose song, “Remember Me,” when played by Miguel to his aged great-grandmother Mama Coco (voiced by Ana Ofelia Murguía, “The Last Call”), is a poignant reminder of everyone’s wish to be remembered. After Miguel’s domineering grandmother Abuelita Elena (voiced by Renée Victor, “Paranormal Activity: The Marked Ones”) follows Miguel into the plaza and smashes the guitar he planned to use in the local talent competition, the boy enters Cruz’s tomb to “borrow” his guitar. This action, however, upsets the “space-time continuum” and he is unceremoniously transported to the Land of the Dead together with his faithful dog Dante.

Miguel knows that he is no longer in Kansas when he sees skeletal-like figures with colorful skulls existing in a strangely elaborate and visually diverse landscape. Though the dead can cross over to the other side via a bridge of marigolds, the spirits continue to exist only through the continuing memories of their loved ones in the world of the living. Once they are forgotten, they die a second death and disappear. Seeking clues to his family’s past, Miguel must obtain permission from someone in his family to return home before sunrise.

He meets several generations of ancestors, but they refuse to give him the blessing he needs to return unless he gives up music, something he refuses to do. Instead, Miguel vows to find and seek the blessing of de la Cruz whom he believes is the missing relative from the photograph. Fortunately, he receives assistance from Héctor (voiced by Gael García Bernal, “Salt and Fire”), a drifter who wants Miguel to take his photograph to his relatives in the land of the living so that he will not be forgotten. Their strange relationship opens a path for Miguel to see the world in a different light.

Coco is a heartwarming and beautifully animated story about a young person’s passion for music and his struggle to confront and overcome his family’s resistance to his dream. It is a juggling act. Miguel must learn to value his self worth and the courage to be true to himself while maintaining loyalty to the family he loves. He must also discover that no one ever really dies as long as their memories remain in the hearts of those who love them. And while the plot can become convoluted, the film is not really about the narrative but about the joy of self expression and, when we hear Miguel singing “Un Poco Loco” with the bone rattling Héctor, it is a moment of rare exuberance. 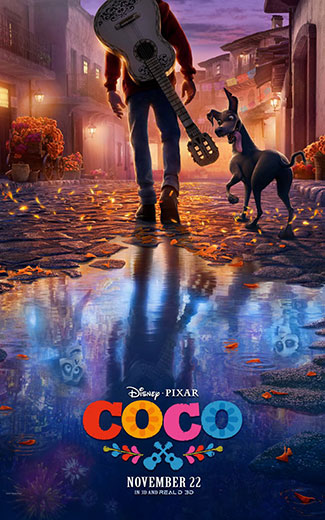