The term “Cold War,” especially in cinema, usually evokes images of espionage, militarism, geopolitics and stern men speaking tersely in jargon that is only comprehensible to those with a working knowledge of the genre. Pawel Pawlikowski (“The Woman in the Fifth”) defies such expectations with his film Cold War, a starkly beautiful romance that deftly weaves between the interpersonal and the geopolitical. Covering a fifteen-year period and loosely inspired by Pawlikowski’s own parents, Cold War is a deceptively simple tale that utilizes crisp monochrome cinematography, a 1.37:1 aspect ratio and a mise-en-scene of dark clothes and pale faces to express themes of isolation and connection, hope and sorrow. If all that sounds too heavy, consider that Cold War is also efficient and brief, clocking in at only 88 minutes. So although it might appear to be a ponderous and potentially pretentious “art film,” it is worth seeking out for its intelligent handling of deeply personal and resonant material.

The plot, unsurprisingly, is set during the Cold War. Following the end of the Second World War, musician Wiktor (Tomasz Kot, “Breaking the Limits”) and broadcaster Irena (Agata Kulesza, “The Innocents”) are engaged by the Polish government to set up an arts academy that will promote traditional music and dance. Local children and young people audition for this school and are accepted on the basis of their musical talent, but also in terms of whether they fit a particular image of “Polishness,” at least according to government official Kaczmarek (Borys Szyc, “The Mole”). Among these talented performers is Zula (Joanna Kulig, “Pitbull: Tough Women”), a rebellious youth whose background may not be that of a Polish villager, but whose looks reflect what Kaczmarek requires. As Zula becomes a shining star of the company, she and Wiktor develop a romance.

The set up for the film suggests that it may be a salacious tale of a predatory teacher and an innocent student, but neither Wiktor not Zula fit these stereotypes. Their age difference is not that great and Zula never comes across as a precocious, Lolita-like teen. As the narrative covers a number of years, Zula flowers into a confident woman, while the musical company becomes a sensation. However, the political requirements of the company place constant pressure upon the artistry and also on the central romance, especially as Wiktor finds his musical ambitions co-opted by the demands of the state, and dreams of a freer life in the West.

The notion of regular people living under the Cold War is not often seen in Western cinema, and Pawlikowski maintains an unflinching but always humane perspective on this regimented existence. Locations are as much characters as people, from the dilapidated yet bustling academy to the cities where the music company performs, including Istanbul, Berlin, Warsaw and Paris. Fittingly, the tensions between art and politics are often expressed through music, as Kaczmarek steadily imposes political propaganda into the musical performances, including one compelling yet disturbing scene in which a giant image of Stalin is integrated into the show. In a contrasting sequence in a Paris bar, the camera follows Zula in a mesmerizing long take as she dances her way around various partners to the vibrant thrill of American jazz. It is a sequence both heart-racing and heartbreaking, as the viewer falls in love with Zula’s vivacity and passion much as Wiktor does, yet the sober tones of the film maintain a sense of containment and governance.

The episodic structure of the film, divided by supertext that declares the time and place, underline an environment that is regimented and controlled. This constant enforcement, manifested both as Kaczmarek and through the cinematic structure itself, repeatedly keeps the central lovers apart, and director of photography Lukasz Zal’s cool visual style keeps the audience at a distance as well. We always see the characters, but like the perfect love that they dream of, they are perpetually out of reach. Despite the evident passion, there are only two full on love scenes in the film, captured in contrasting ways. The first expression of the relationship is captured in close-ups of Zula and Wiktor’s faces, pressed together while fingers fumble with clothes. Later, a scene of them making love is captured in long shot, a single light source dividing the room in two that exquisitely captures the divided lives that they lead.

Pawlikowski’s handling of the material is superbly nuanced, as the film never slips into melodrama or histrionics. Despite this distance between the characters and viewer, the performances of Kot and Kulig are never less than entrancing, their eyes and tiny gestures communicating volumes of passion and pain from within the characters’ constrained existence. This paradox is typical of a film that balances a range of seeming contradictions: Passionate yet contained, beautiful yet austere, clichéd yet moving, deeply personal yet insightfully political. Come the end of this compact and intense 88 minutes, the viewer has been treated to a gamut of human emotions, and is likely to have felt amused, thrilled, moved and distraught. Cold War is in many ways an extraordinary film, and well worth seeking out. 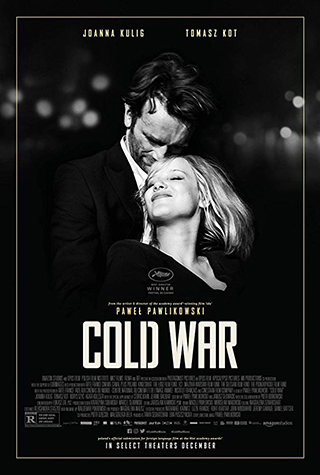